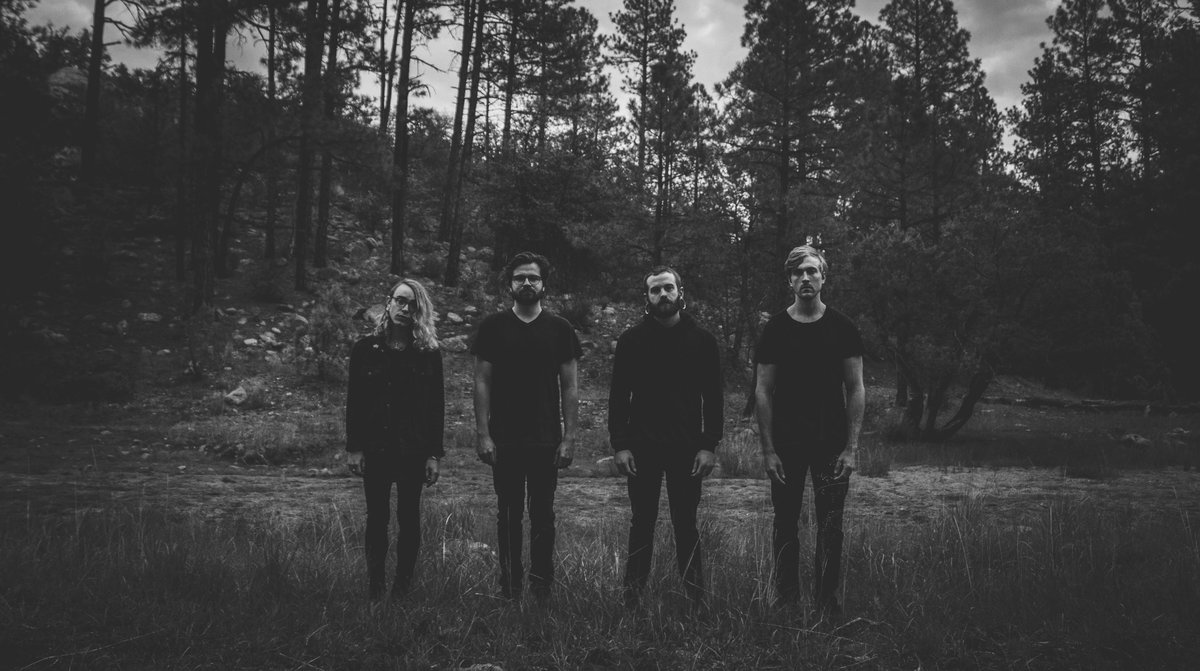 By Shaun MilliganJanuary 30, 2020 No Comments

Contending easily with lengthier counterparts, The Black Moon offers a trio of tremendous, alluringly gloomy tracks that should place – and keep – Holy Fawn firmly on your radar.

Let’s get the obvious question out of the way first. Did you read that right? Three tracks? Yes, dear reader, you did. Am I really choosing to review this record from among the slew of other, longer-running releases available across the music world’s current, copious offerings? You bet your arse I am.

Arizona four-piece Holy Fawn received high praise here at Everything Is Noise when they released previous album DEATH SPELLS in September 2018. Among the reasons it was lauded far and wide: brooding, shoegaze atmosphere teeming with black-metal influences, monumental use of delay and reverb, and effectively unnerving layering. This meant it was surely only a matter of time before a follow-up surfaced. And what’s better than the realisation of such a highly-anticipated follow-up? One that seemingly drops out of nowhere, and hits just as hard as you’d hoped. Time to journey to The Black Moon.

Each song of the EP’s meagre roster carries a unique identity that sets it apart in wonderful ways. ‘LOUD HEAVY PRETTY NOISES‘ is the slogan emblazoned underneath the band’s name atop their Bandcamp page, and good heavens, it ticks all four of those boxes with aplomb. “Candy” begins proceedings with a myriad of electronic interference, soon overrun by a wash of powerful mid-tempo distortion that rises up to loom over you like an impending wave. Clean guitars follow, lowering the intensity for the cathartic, tranquil lines of the vocals that also appear. The song creates an endearing sense of both calm and uncertainty, constructing layer and complexity before bursting forth into distorted, shoegazey chaos once again. Brief glimmers of vocal ferocity do reveal themselves at the end like a premonition of what else awaits, but are soon replaced with further ambience and militaristic drums.

Second track “Tethered” takes a decidedly more ambient approach, using its wordless, digital soundscape to provoke a more pensive focus from the listener’s time with the record. Distant, ambiguous choral song and scattered, solitary voicings rest dangerously close to what appears to be an audio representation of the very edge of space. “Tethered”, then, is a superb and short offering that juxtaposes its predecessor “Candy” marvellously. Yet it retains the preceding sense of wilderness and wandering, as singular notes bleed in and out of the cosmos you’re floating through.

All of this transitions into momentary silence. Odd to be praising its inclusion on a site named Everything Is Noise, but it’s true. Tastefully deployed, the sound-less seconds are a welcome and refreshing opportunity to gather thoughts, reflect, and simply bathe in its refining properties.

And then, final song “Blood Pact” lumbers into existence. Another unique musical trail, we are treated to more artful layering that joins saddening synth tones. All before a bass guitar that creeps on with hypnotising rigidity. There’s also more of the sultry, dark vocals we heard on “Candy”, with poetically-phrased talk of devotion, sacrifice, and desire. Halfway through, an ambient transition occurs, almost like the calm before a storm you know you aren’t quite prepared for.

It is at this stage in “Blood Pact” that Holy Fawn begin their final ascent towards a crescendo that absolutely pummelled me like a freight train. Led in by a stark transformation from ethereal singing to piercing screams, pulverising distortion boxes you in as reverb-soaked guitars disperse beyond reach into untold expanses. It is a sublimely crafted two minutes of music that does a far better job of encapsulating this EP as an entirety than any words could. Then, at its climax, a trapdoor opens to a descent that begins the inevitable task of processing what you’ve just experienced (and replaying it as though you have any willpower not to).

The Black Moon effortlessly stands side by side with – and overshadows in many cases – other offerings currently in circulation. Its criminal downfall is of course its catastrophic brevity, but compensation comes in the form of an experience that engulfs you entirely and seems to slow time while you are in its beguiling grasp. There is so much more I could have dissected and revealed, but this EP is a journey best taken alone and fully immersed before shared. ‘Can you hear me when you’re sleeping?‘ is the question posed amidst the darkly-poetic, smitten lyrics of “Candy”. Well, Holy Fawn, I can confidently say that after in excess of 29 playthroughs of The Black Moon, the answer is a resounding yes.