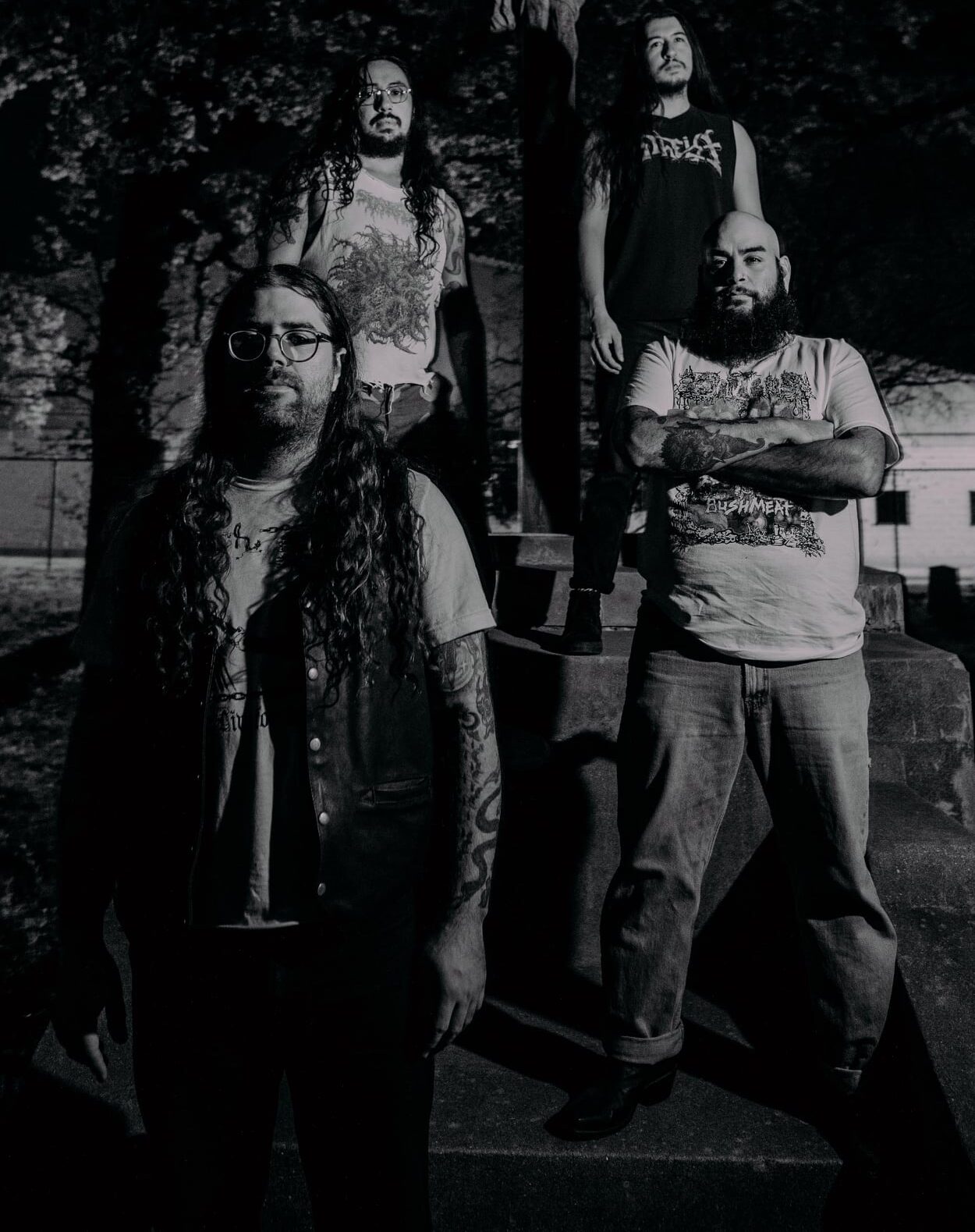 Whatever ails you, Haunter‘s brand of upgraded death/black metal is sure to be the salve you need. Discarnate Ails is massive, dense, and supremely competent.

So, as it usually goes, our PR manager recommends the new Haunter album. ‘Some of the best metal you’ll hear all year‘ he said through my paraphrasing. All right, sold – album art looks great, I can already tell, broadly, what kind of music I’m in for. I hit play, at work no less, and I’m just thrown into a dense tempest of metal. One song in and I already love it, though to be fair that’s about a third of the total album. I look into the band and… wait, this is that Haunter?

Ah shit. Of course I remember Sacramental Death Qualia from 2019. I… didn’t like it a whole lot. It was a bit too cavernous for my liking. I like cave metal, but something about the lo-fi production just didn’t sit well with me. It was however the quintessential offering from I, Voidhanger, and I can respect it for that alone. Now, the Texas quartet is on Profound Lore and, wow, the production is a fair amount cleaner, clearer, and so much more suited for my enjoyability of this kind of music. I’d say it’s night and day, but this music in either form is about as sunny as an overcast day in hell.

Discarnate Ails rips – there’s not much else to it. I could leave the review there and just play a clip from the end of “Overgrown with the Moss” and you’d be just as convinced. A heady amalgamation of death and black metal, it dances between each style like a enchanted skeleton rattling across the depleted plains of a failed world. But across its cracked, dehydrated, and eroded soil is something oddly, sinisterly majestic, almost imperial. Like a new king touching down upon his newly conquered quarry, and you get the feeling his ruling won’t exactly be benevolent.

I’m reminded of Convulsing, another deathed-up black metal project (or is it blacked-up death metal?) with a similar cult following and unadulterated sound. What Haunter do though is wholly theirs. Across three tracks, Discarnate Ails encompasses a lot. It’s ass-beatingly heavy with lacerative guitar tones and pounding drums. Vocals command the instrumentation like underling armies – a guttural howl summoning double-bass rage just before minute six of “Chained at the Helm of the Eschaton”. Other times, it’s unrelentingly groovy, packing some serious melody into your ears, several times in a track (these mammoths are eleven, seven, and fourteen minutes a piece rounded up). Guitars will hold a riff, but it’s fortified by immense drum play, going from blackened blasts to double-bass rhythms that you can’t help but tap out with your own feet.

The first half of “Overgrown with the Moss” is genuinely some of the best metal I’ve heard this year. It’s just fun while retaining its apocalyptic mood, really showcasing the color that metal can use to fill in space and build interesting soundscapes. The moment to moment progressions are always a sight to behold because of it. The music makes pictures in your head that elude description, yet convey something so hyperspecific that it defies itself. Look to the cover art for a demo of that feeling. You can make out jutting structures and a white fog or snow spindling around them, and are those eldritch horrors flanking either side of them? It’s metal, so it’s likely. Regardless, Discarnate Ails is a record you feel just as much as you hear, and that alone means it’s worthy of your time.

I’m quite impressed with not only the improvements made from Haunter‘s last effort to now – both veering on the objective side and those subjective to me. They’ve emerged as a band that I now must give shelter to in my mind and heart. I find it hard to believe this album will be leaving my side throughout what will likely be a rough summer, and it will probably maintain its high status with me to the end of the year to sit atop a throne forged from the works that weren’t quite good enough or didn’t stand the test of time like Discarnate Ails should, to be enjoyed and talked about again and again, until the next one. No pressure.