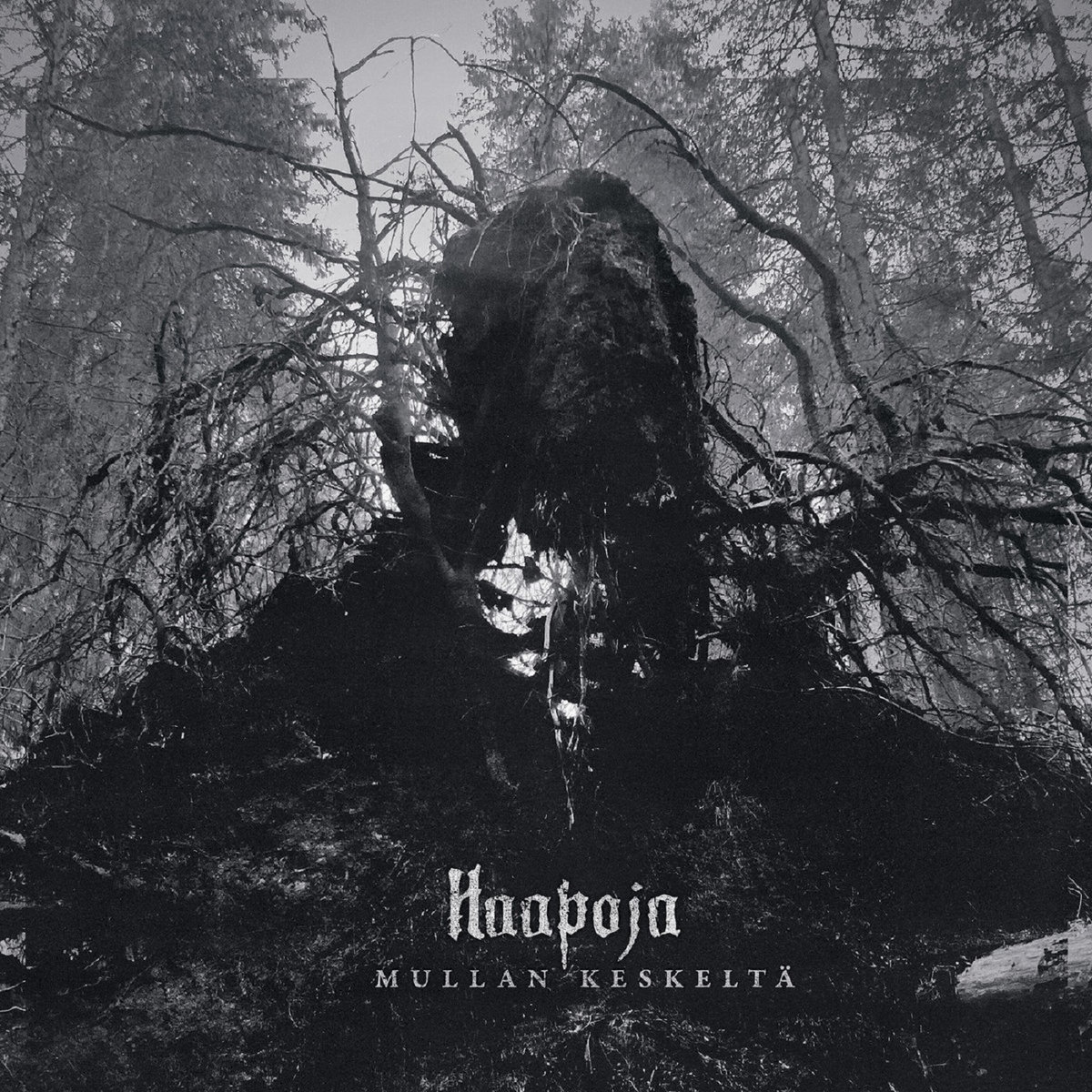 Haapoja soar eloquently from the bleakest sludge with their new album “Mullan Keskeltä”, rejoicing through dark aesthetics and unrelenting tension.

Haapoja are one of those bands that improve wildly through maturing. I don’t mean to imply that their earlier material was bad in any way by a long shot, I’m just saying that the diagram seems to be that of an ascending type, as Mullan Keskeltä beats its precursors effortlessly. It’s been five years since their last album – a collaboration with Dephosphorus – and during that time, Haapoja have managed to breathe a new kind of fire into their output, flourishing through a combination of blackened crust, death, and sludge, seemingly also reinventing themselves quite a bit along the way.

Mullan Keskeltä was released on March 6, and I knew I had to pick it up for further scrutiny as soon as I heard it, not least because the fellow Finns have created something so captivatingly abrasive and ugly that it sincerely pops out from the local scene for its own benefit. Throughout the album, the band’s influences echo to some extent, but without overshadowing the maverick idiosyncrasies found on it. Obviously Haapoja draw their collective inspirations from wherever they may, but a mundane listener like myself could point out the similarities to such established acts as Converge, Trap Them, Baptists, and even Deathspell Omega to some extent, without being too far off.

For once, I’m also in the extraordinary position of being able to immerse in something completely crafted in my mother tongue. This occurs rather rarely, especially when taking into account that I can actually stand what I’m hearing. That specific characteristic without a doubt pushes the enjoyability up a notch for me personally; not that it’d be essential to be able to fully savor it. Regardless, Haapoja refuse to deter themselves in any measure, as the opener “Selkään Kaiverrettu” emerges from a wall of feedback into a full throttle in a blink of an eye. Shortly it becomes clear that the chasing feel decelerates only if absolutely necessary, and those brief halts are placed with precision throughout the album.

Third track “Maailmanlopun Keskipiste” is a great example of a fluently designed breather. The dissonant guitarwork can be held responsible for the dark atmosphere dominating the album, and it really enters the forefront during this and the fourth track, “Tunne Kylmä, Tunne Pelko”. This one continues the slower pace, only in a more vibrant and shifty manner. This track repeatedly brought the aforementioned Deathspell Omega connotations to mind, strictly compositionally speaking. Despite being extreme on so many levels, the riffs and vocal phrases are the kind that will get stuck to the deepest corners of one’s mind for weeks.

The hooks are sharp and striking, eminently on “Kulmapoimu”, which in all of its gloominess and unpredictability can be signed off as my favourite moment on the album. The steady leveling interrupted with spastic blast beat bursts tickle my nerves just right, as the tone gets all the more pressuring while the song evolves. Haapoja are masterful in creating feelings of urgency and tension that hold up unbroken through the seven tracks. The remaining pair continues to underline this, and I don’t feel the need to explain myself further, as you can now go and listen to the opus yourself.

So in conclusion, the album is exactly as unforgivingly vicious and murderous as you might expect from a band who have taken their name from a native serial killer. Haapoja execute their vision with aplomb, having authored something that should break away from the confines of this little chilly country of ours. After all, with complete self-reliance I can attest that Mullan Keskeltä is one of the greatest things on its field to ever come out of here.