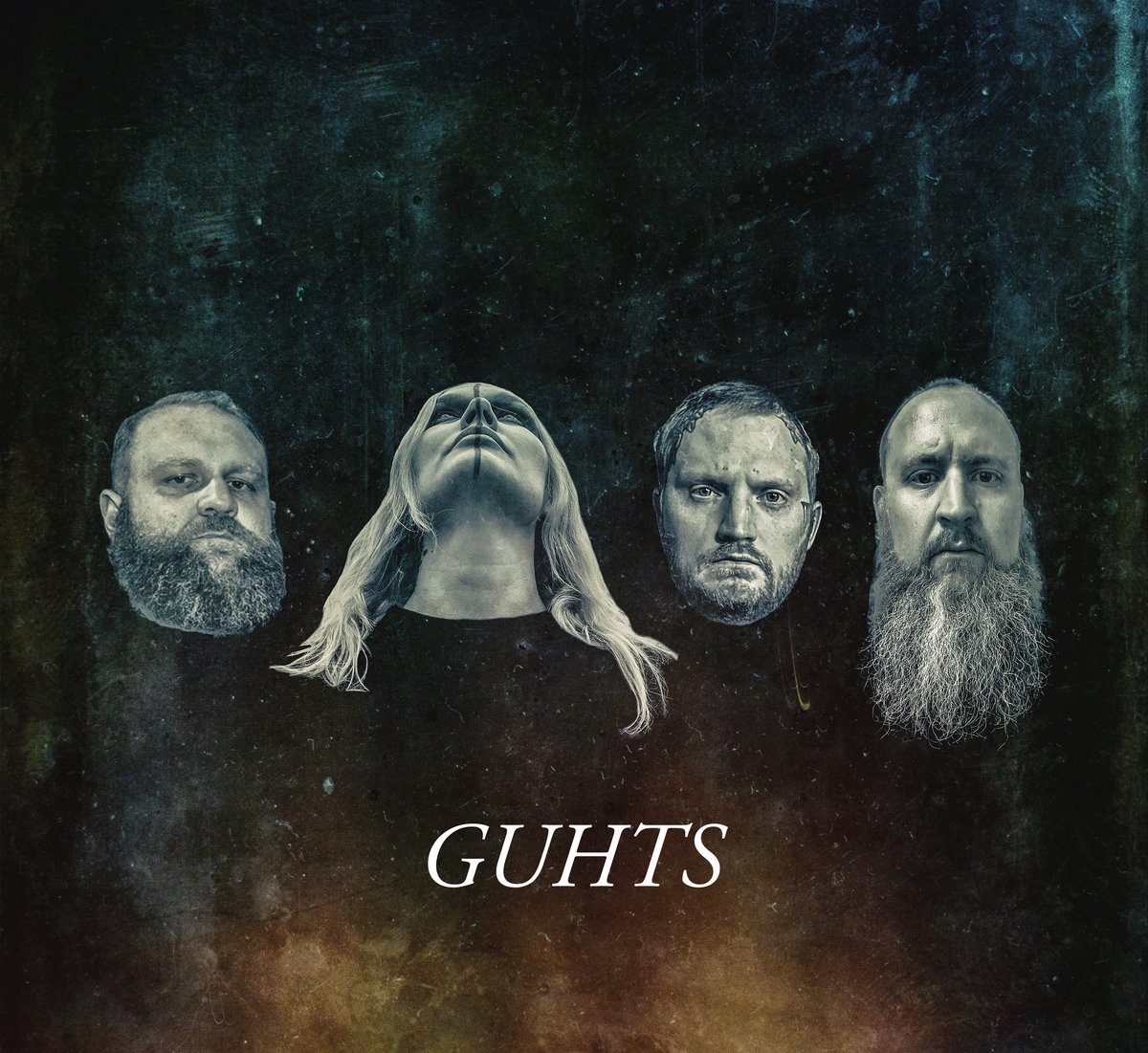 With a combination of soaring, atmospheric sludge textures, damaging melodic hooks, and powerfully executed vocals, GUHTS’s Blood Feather is an excellent example of modern metal experimentation that goes beyond the broader spheres of post-metal’s boundaries into a new doomgaze territory.

New York post-metal project GUHTS was formed off the back of other local experimental and progressive metal ensembles Witchkiss, Bask, and Black Mountain Hunger. Combining an impressive skillset of atmospheric guitar work, dense, complex percussive elements, and transcendent vocals from all these projects, the band’s debut EP Blood Feather highlights the strengths of each of the musicians involved. Four songs handcrafted with precise musicianship, this EP promises to be a strong start for a band looking to challenge the limits of post-metal.

“Eyes Open” is the first track to get things going as the EP begins. An array of marching drum rhythms and extensive guitar chords imitate a sludgy presence, whilst the introduction of Amber Burns’ vocals possess a certain intensity that presents a spine-chilling sonic sensation. The building of tense, climatic atmospheres is distinguishable here – there is a vison of outer world being through the tremolo guitar sections and sinister vocal moans. The lyrics further add to this chilling, unknown sonic realm: ‘with eyes open, down on your knees, your fear is showing‘.

These atmospheric and ambient influences continue in the next song on the EP, “Handless Maiden”. The drums command a much fiercer timbre, as does the guitar and synth work of duo Scott Prater and Dan Shaneyfelt. The over-looming sense of dread, which is constructed through these dense, heavy textures, invites Burns’ heavy punk-infused vocal style to take centre stage whilst an almost black metal sort of thing seems to be going on amongst the instrumentation, providing the piece with some diverse moments that shift between atmospheric sludge and doom metal passages into more extreme territory.

“The Mirror” is up next, and, alternatively to the first two tracks, takes a more serene approach to things, allowing creeping piano sounds and increasingly tense chord sequences to progress throughout the song whilst the vocals add some depth and warmth for the listener to trap themselves into. The extended synth sections appear quite unique as well, creating a swirling quality that sends things into a cosmically fabricated sonic landscape. As the lyrics call ‘You’re on your own’, one can’t help but embody that sense of nihilistic dread that is conveyed through the music.

Final track “The Forrest” continues this calm-before-the-storm approach within the songwriting, in which the opening few minutes consist of slow, doomy instrumentation that rings out and the wailing vocals calling for an epic climax. By the song’s mid-point, we are greeted with some rough, clean style vocal exchanges and drone-like guitar and synth textures, bringing the heaviness back and going full throttle. There are some nice percussive and guitar exchanges going on during the instrumental sections as well where the band seems to be ramping up the aggression, yet that ambient presence doesn’t fall flat; rather, it contributes to this somewhat ‘metalgaze’ or ‘doomgaze’ atmosphere.

An exciting piece of experimental musicanship appears to be at the forefront of this newly formed passion project and Blood Feather is the debut ep that could very much be a sign of great things to follow. The members behind GUHTS know where they want to go with this project and evidently have had a vast amount of experience within America’s underground metal scene to prove it. Whatever comes next just goes to show that there isn’t a lack of creativity or experimentation upheld by artists exploring new avenues associated with sludge, atmospheric and post-metal genres within the scene.