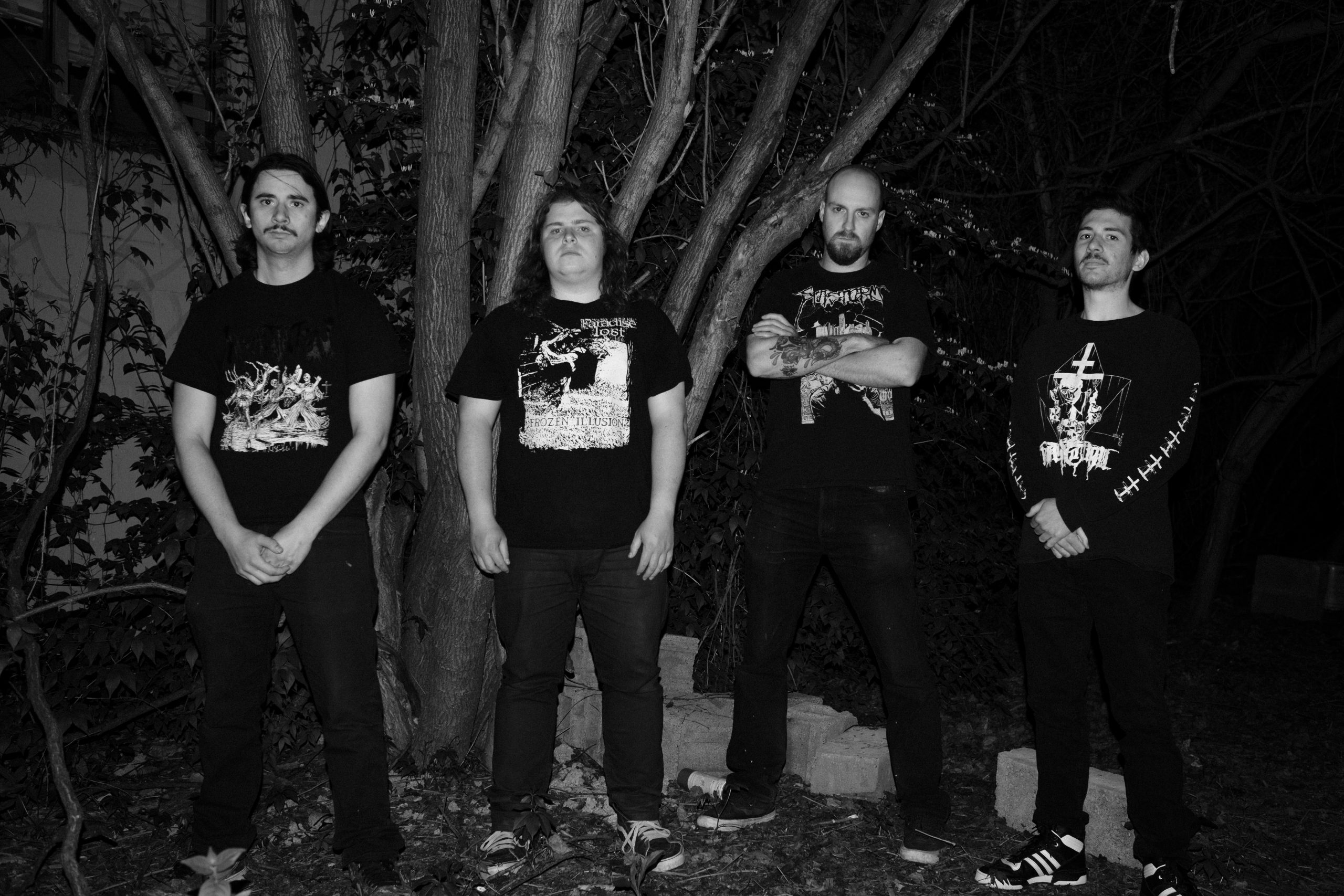 By David RodriguezDecember 20, 2021 No Comments

Get your season’s beatings started early with Genocide Pact and their gnashing, pissed-off self-titled album, a swinging flail of death metal for the despondent.

I love that there’s music out there with lovely variations, intricacies, and nuances to dive into, whether it’s flowering out into a dense concept album or just forming a solid project with no real cohesion except the quality of it all. I also love that there’s music out there that knows exactly what it wants to be and charges along like a tank unimpeded by anything, corporeal or otherwise.

Me and death metal ain’t been on the best of terms lately unless it brings some friends with it or is the cream of the crop, so I don’t look out much for it these days. Genocide Pact though? They snuck up on me and the name alone made me interested. Straight from Washington DC, they reside at ground zero for bullshit to be mad at as it houses America’s most important – and disappointing – political institutions.

Death metal is no stranger to the woes of life, ever keen to throw a blanket of hyperbole and fantasy over them to build a bloody tent of commentary at times and that’s what you get here. While you won’t get as on-the-nose interpretations of our current state of doom and gloom as, say, a band like Terminal Nation would, the brutality is just as immense, and it’s hard not to relate – for all the wrong reasons – to that tonal execution of the band’s self-titled album.

Take “Mutiliated Vision”, for example. Drums strike up a death march rhythm with that near-ceaseless double bass, and guitars immediately start sawing away at your sanity with caustic riffs with a hefty amount of melody to them. The lyrics are cloaked in a palpable sense of dread and detesting for people who believe just about anything on the internet:

This is just a basic, personal reading of these lyrics, but when you account for our society’s collective inability to seek out reputable sources for information and an aversion to facts, it’s hard not to read it as such. Our anxieties, insecurities, and prejudices really open us up to manipulation, sending us careening down a path of destruction that’s hard to reverse. Genocide Pact come off as despondent at best, but, from their point of view, how could you not? How could you look at everything going on the past couple years at least and not feel similarly defeated and hopeless?

The band’s particular brand of death metal depends on your adopting of this mood for full enjoyment, if even temporary, like suspending your disbelief for a movie that takes liberties with what we know is reality. It’s not asking much, seeing as people listen to and enjoy fantastical media all day long, but I get that people who eschew negativity and facing harsh realities won’t be vibing with this quite like me. It’s a hard sell when a band like this steers their runaway train of a sound into territory covering how we are becoming our own worst enemies, engaging in wanton and perverse violence against each other, and subjecting others and ourselves to crippling domination and oppression in order to survive, only denying our inevitable extinction. Just look at the album cover, which is adorned with many an image and reference to the ways we die, bones piled up

Of course, you can just relish in the instrumentation, of which there’s a ton of heavy-hitting stuff just waiting to connect with your skull. Production here is on the cleaner side of things, but that only makes every fleck of bone and mist of blood ejected from the instrumentation more eloquent and vibrant. Distortion is high, vocals are low, and everything meets in the middle for a driving good time with mid-tempo menacing and gritty textures. A favorite of mine is the mosh-worthy beginning and end of “Perverse Dominion”, which really throws everything at you before and after a melody-focused, juicy center with downward riffing and guttural vocals that growl damningly of our lives under crushing status quo.

All this to say that, yeah, I like this stuff! It’s been fun reconnecting with a more primal facet of my love for music, something I use for escapism and entertainment, even if the content of the music is as dismal as this. At least I feel like I’m not alone in my anger, depression, or despair. Misery loves company after all, and Genocide Pact are quite the pals to have as you navigate through your own hellish version of life. Solid death metal for our very unsolid lives, plowed into your living room like an enraged iron bull.