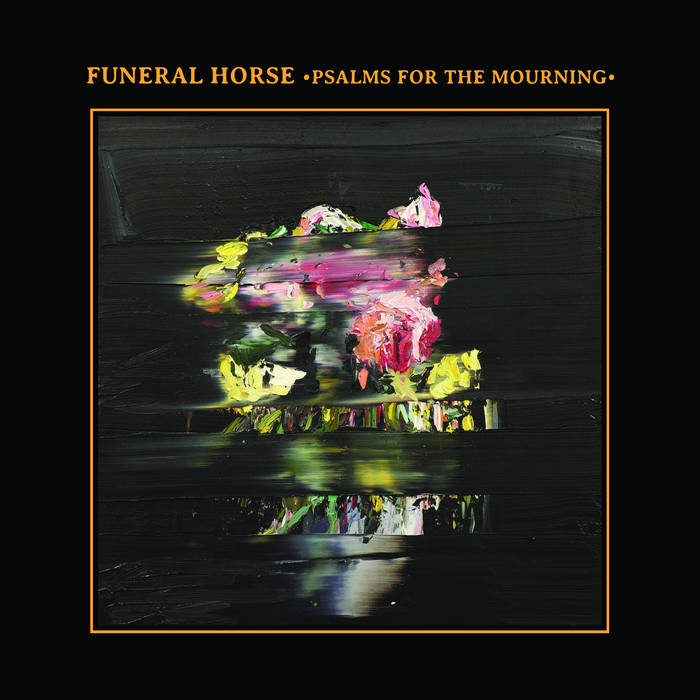 Funeral Horse – “Psalms For The Mourning”

Every element of Psalms For The Mourning seems misaligned, but the natural musicianship of each player shines through and makes this rough album well worth listening to.

The most obviously odd element of the album is the vocals – which, to be perfectly frank, I don’t find enjoyable.  “Better Half of Nothing” starts everything off with probably the simplest song on the album, and the effect of the repetitive guitar and bass riff is so as to give limelight to the vocalist.  The vocalist, however, in this song and throughout the record, is engaging in a style of tuneless shouting that fails to carry any melody and does not quite seem to reach the notes it attempts to.  “Divinity For the Wicked” is probably the strongest track for vocals here – and, ironically, one of the tracks with the least vocals, totaling to 40 seconds of the 5 minutes long song.

There are other odd stylistic choices that glare out and break immersion in Psalms For the Mourning: the chugging in the beginning of “Sacrifice of a Thousand Ships” seems a little out of time and only corrects itself when the drumline changes from interesting to frumpy; and the solo in “Better Half of Nothing” is startling due to its inclusion of duff notes.  Presumably done for effect, but not quite working, it sounds much as though the guitarist has simply made mistakes, rather than attempting something interestingly atonal.

There are, too, some odd production choices.  The horns in the end piece of “Better Half of Nothing” (you may be able to guess that I’d suggest you skip this song) are almost comically jarring.  The beginning of the next song, “No Greater Sorrow (Than My Love)”, is an independent jam – and a very good one – that does not really fit with the rest of the song or the song before.  It is a piece of filler that the producer has tried to disguise, but which really should just own its existence as a short jam and have its own separate track.  Something similar occurs in “Emperor of All Maladies”; the song feels like it has two versions that have been tacked onto each other, with an obvious and clumsy break between them.

To foreshadow what’s to come, though, it must be said that the two versions of that song are each great.  Despite all the above (and ignoring the first track, which I just cannot like), Psalms For the Mourning is a hugely enjoyable album. It has dirty, dirty soloing.  I was gurning for the majority of this album.  Especially do listen to “Emperor of All Maladies” for this.   It sounds, frankly, as if Funeral Horse are a band that revolves around jamming.  It is easy to imagine the lacklustre riffs and melodies being the planned out, composed parts, and the dirty solos being off the cuff jams from a group of musicians who excel at improvising together.