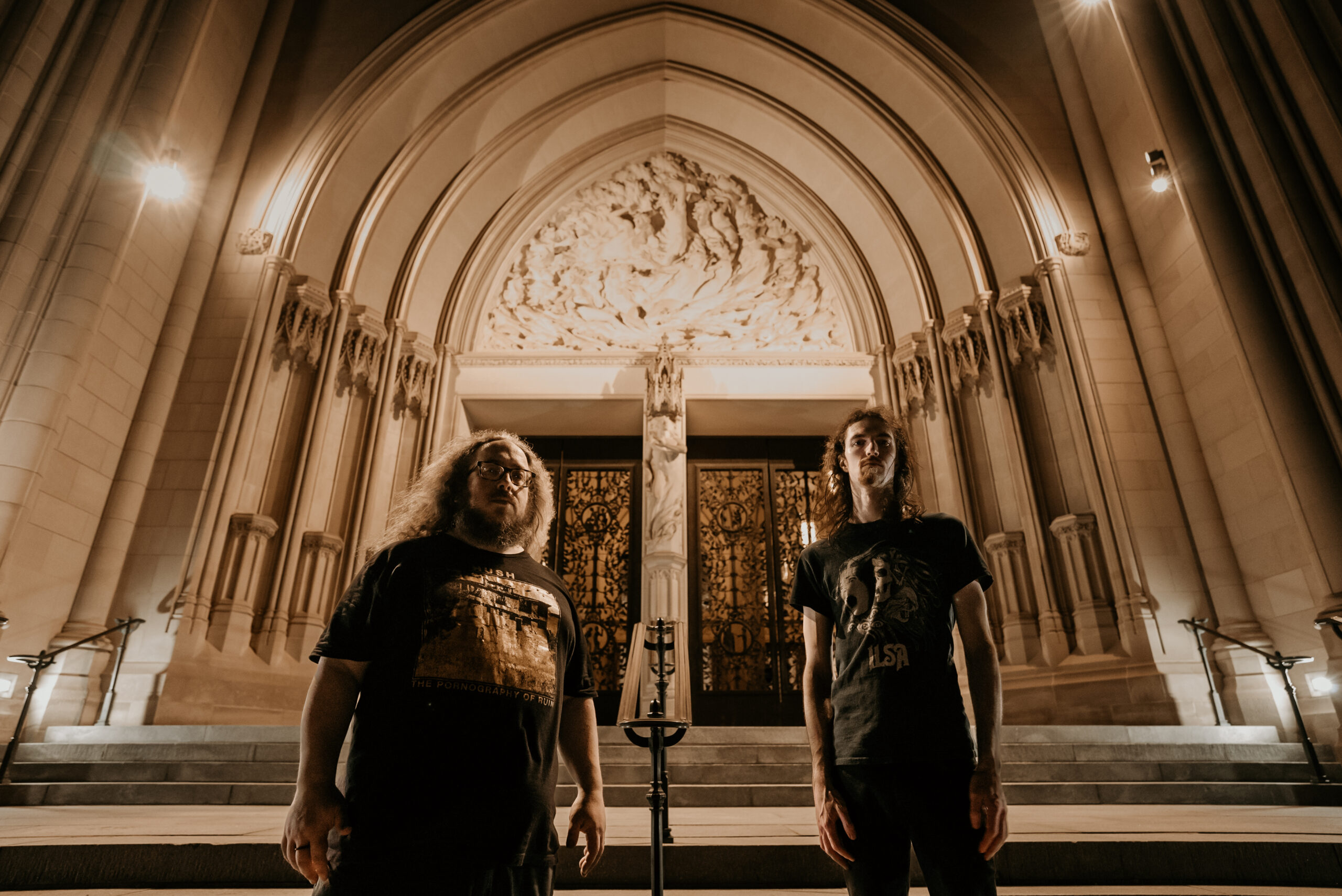 By David RodriguezNovember 15, 2022 No Comments

If slow, unforgivingly heavy doom metal is your thing, Foehammer need to be on your radar because Monumentum delivers on those fronts.

Maybe I’m just a fucking nerd, but to me the name Foehammer conjures one thing and one thing only: Carol Rawley, callsign Foehammer, UNSC Navy ride-or-die pilot of Pelican Echo-419 from Halo: Combat Evolved. The more well-read among us (also nerds) will know that Foehammer also refers to the sword of Gandalf from The Lord of the Rings, whose name is translated from the Sindarin name Glamdring which sounds almost as cool as Foehammer. Almost. Given the aesthetic of our band of focus today, I’m going to assume they had the latter on their mind when naming themselves.

Foehammer the band hail from Annandale, Virginia, consisting of two pals Jay Cardinell (guitars, vocals) and Ben Price (drums). They divvy up a dense deluge of doom metal, the kind that’s inescapably heavy and slow. It sounds like I imagine quicksand feels, just dragging you down into its depths with no sentience, care, or guilt – a function of nature, primal and ceaseless. I interpret the album’s name, Monumentum, as a portmanteau of ‘monument’ and ‘momentum’, both of which are integral to getting on board with the duo’s sound.

I’ll admit, it was tough for me to get with it at first. Why? I used to love this kind of shit. Like Run-DMC rapped, ‘slow and low, that is the tempo.’ Glacial, elephantine, sludgy doom was the move for quite a while after I got into heavier music. But I listen to Foehammer and feel like I’m waiting for something else to happen which is unfair to what’s there, like when you don’t listen to what someone’s saying to you because you’re just waiting to respond.

It’s true, there’s some stagnation on Monumentum‘s songs – that’s kind of the point. You’re made to sit with a moment, bask in it. If it was a movie, it would take great care to flesh out characters, not depend on bombastic setpieces to carry the whole, but it’s not without its action, sex, or merit so to speak. There’s a reason there’s jokes and memes, as hyperbolic as they can be, about doom metal bands playing the same note for several minutes, then maybe soloing, and getting the fuck outta there. It’s funny, but only because there’s some (stretched) truth to it.

This is how I felt listening to songs like “Orm Embar” (the name of a dragon from Earthsea, a fantasy world developed by celebrated novelist Ursula K. Le Guin) and “Oblivion of Sand”. They’re not bad songs at all – in fact, I liked the melodies each song eventually conjured up in their ten-plus minute runtimes. The vocals growl and belch forth in a beastly manner and, while I’m at a loss as to what they’re saying, contribute to the mood exponentially. “The Disk” has the benefit of a rollicking intro with fierce drumming and guitar work to captivate and satiate. In fact, let me just get this out of the way now: the drumming throughout this whole album is fantastic. Price really lets loose in the wide space he has with dramatic fills, lurching rhythms, and catchy moments that perk the ears.

You know what I really did like though? “The Great Cortège” suite at the end of the album. Consisting of two tracks totaling 25 minutes, they’re truly progressive songs that move pretty effortlessly from one measure to another and are more lively and varied on the whole. Part one, “Accession Of The Elder” has a wonderfully ambient, minimalist intro that I just bathed in. It’s somber, yet telling of adventure to come; the gripping first chapter of a good novel (maybe a Le Guin one?). Part two, “Annointment Of The Gift-Child” is equally as engaging with some sinister rhythms beaten out by Price and guitar riffs from Cardinell that spell desolation with rapid-fire salvos to break it all up. It is truly the climax of Monumentum and I selfishly wish there were more of it.

Make no mistake, this is a rumbler of an album. Any qualms I have with it are purely personal – flaws if you desire. Still, I found a lot to like here and Foehammer are consummate performers. It takes a hell of a lot for me to say that music is bad or doesn’t deserve to exist because that’s just disingenuous – so I don’t say it, nor will I in any of my reviews. There are tons of people out there that will like this punishing form of doom metal without qualification when they hear it, and I hope I did the music enough of a service to grip those people with these words. Enjoy it – who cares what I or anyone else has to say?