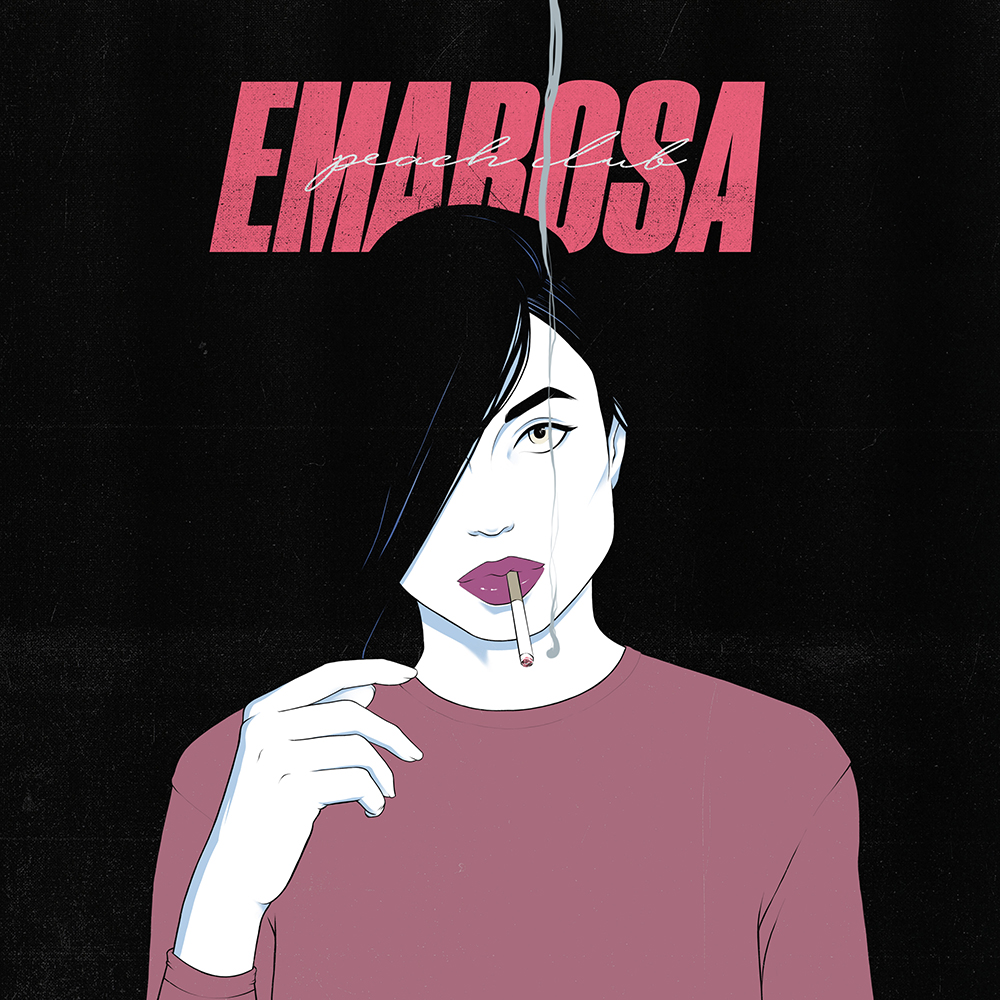 By Spencer AdamsMarch 2, 2019 No Comments

While Peach Club may be a departure from their earlier works, Emarosa prove themselves capable of making music that makes them happy and shows how branching out can achieve amazing results.

Emarosa have one hell of a turbulent history. Starting off way back in 2007 with This Is Your Way Out as a post-hardcore outfit, their debut full length changed everything. Scene superstar Jonny Craig joined the band, skyrocketing their presence to unbelievable levels compared to where they were previously. Craig released two albums with the band, their debut Relativity in 2008 and a self-titled release in 2010. Following a quite public controversy, Craig was removed from the band, leaving Emarosa in a bit of a limbo. Former Squid the Whale frontman Bradley Walden made his first appearance with Emarosa with 2014’s Versus. Retaining the core sound of their previous works, the band, Walden especially, admitted that they were not happy with trying to force the same style from their earlier albums. It was with this idea that 131 was created. Showing a more alternative rock sound, the album was their most critically acclaimed effort. Emarosa have now showed even more evolution with their newest release Peach Club, diving into a more radio-friendly pop style that has much more to show than what can be seen on the surface.

Peach Club shows Emarosa at not only at their most poppy, but also, probably, at their most approachable. There are sections full of ‘bubblegum pop’ such as “Givin’ Up” and “Cautious”. While this may seem a bit shocking at first to long-time fans such as myself, the catchiness of these songs really saves them. I have written before about how being catchy is not always a good thing; however, here, it really works well due to how Emarosa use their already established alt-pop sound and incorporates that in order to maintain their core style. This approach allows their songs to avoid monotony and brings a fresh, upbeat tone to the album unlike anything we have heard from them before. As much as I was hesitant when first hearing these singles, the more I played them, the more I really began to love them. It may not be what I was expecting from their newest album, but this breath of fresh air to their repertoire helps set them apart from near any other band in recent years.

There are still numerous times where it’s clear that, while they may have adjusted their sound, they have not abandoned it. “Don’t Cry” and “Hell of It” could easily find themselves on a B-side of their previous album 131. The pop influences on these tracks are present, but much more played down without seeming incongruous with the rest of the record. While I do feel like the lyrical concepts are not quite as honed as they were on their previous release, I find that to be more than fine, as not every song they put out needs to be a deep emotional journey. The tracks can be fun and lighthearted or serious and straightforward without requiring a large amounts of depth. It is still nice to see that, even with the, at times, staggering changes to their core style, they can still show that they have not forgotten where they came from and are still true to themselves.

I do want to give special mention to one thing Emarosa did try to retain with this release, and that is their focus on slower, more intimate pieces. “xo” was, in my mind, the weakest part of the album. It sounded like a boring grasp at the softer tracks they had in their previous records. However, the more I listened to it (which is a bit of a trend with this release), the more I saw it as a genuine, heartfelt effort from the band and thoroughly enjoyed it. “Wait, Stay” is similar in its tenderness and smoother vocals. I am a sucker for a powerful ending track, whether that be manifested by an emotional powerhouse or by sheer force of the music. “Wait, Stay” shows the former in all its intended glory, helping round out Peach Club to a wonderful conclusion that left me satisfied.

It’s important to allow bands room to spread their wings when it comes to their music. Bottle-necking a band into one type of style can, over time, cause either their releases to become stale and predictable, or cause the individuals or the group as a whole to become burnt out. Emarosa adamantly betray the notion of sticking to one theme and push their own boundaries on each release. Peach Club may be a bit different and much more radio friendly than their past material, but it is still a wonderful record that is a ton of fun. Even after multiple spins, I am still jamming out to each song and singing along. Peach Club may not be Emarosa‘s best work, but it shows that experimentation and straying away from preconceived notions can be just as rewarding as it is entertaining.