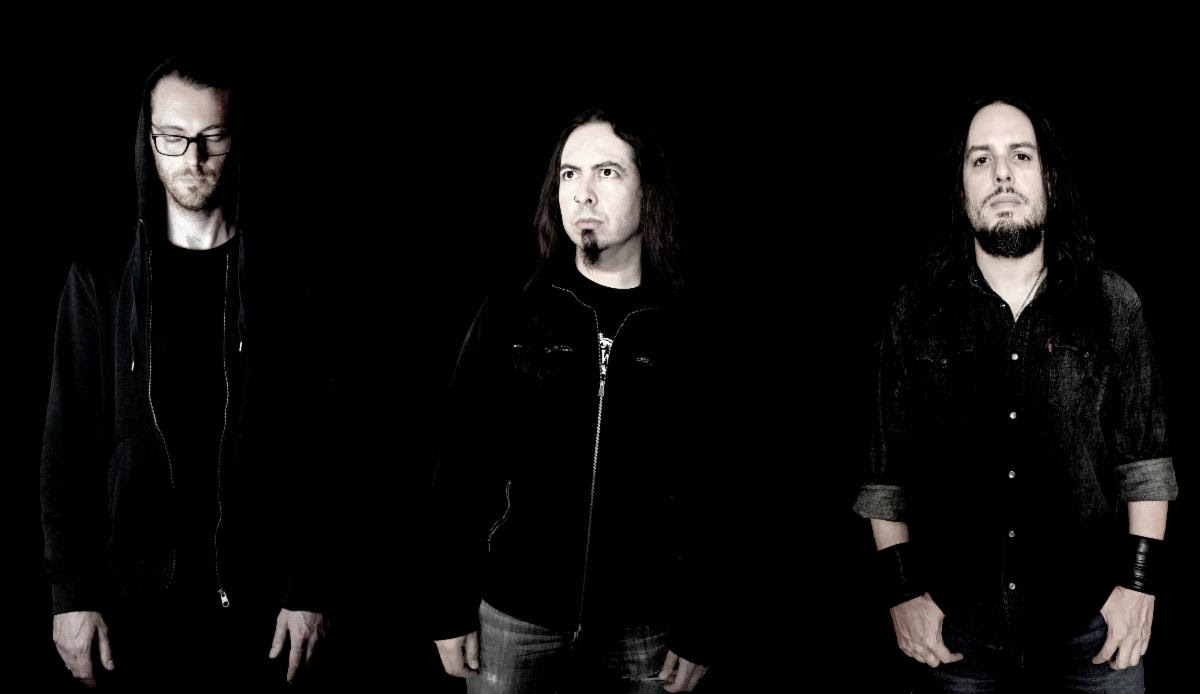 By Robert MiklosOctober 2, 2020 No Comments

Old school aesthetics meet modern stylings and a forward-thinking approach. That’s pretty much what you get with Nostrum.

I was just complaining recently that I’d like to hear some new, progressive death metal band with a solid album. Well, fortunately enough, wish granted – enter Dialogia. Out of the blue, we just got ourselves a very promising band. Honestly, at first I didn’t know what to expect. The album art didn’t particularly strike me as compelling and neither did the name of the band, or even the album title. However, all of that just faded into oblivion as I went deeper into the record.

Who are Dialogia though? They’re comprised of Alejandro Nogales who handles vocals, guitar, bass, and keyboards; Bobby Tufino on guitar and backing vocals; and none other than Jasper Barendregt, of Ulsect and Our Oceans, behind the drum kit. For the purposes of Nostrum, they are also joined by nine other guest musicians. That’s a hefty line-up for a debut album, and each contribution is very nicely placed.

Nostrum spans a generous hour, and it’s split across ten tracks. It’s an album whose defining trait is its sense of balance. It’s actually rather impressive how well-tuned every moment is. The album is a bit of an oddball, in the sense that it hits hard with an old-school, death metal kind of tonality, while being arranged and delivered like a legitimate modern metal record. When I say old-school tonality, I’m referring in this case to the vocal style and the guitar tones mostly. It’s somewhat reminiscent of how Nami style their delivery.

According to the band’s Bandcamp page, Nostrum is, ‘a sonic depiction of a protagonist’s ordinary human turbulence, as he navigates a conundrum of complex conditions during a particularly chaotic age on Earth‘. While I would’ve never guessed that narrative based on the few lyrics I understood, I have to say the idea is perfectly executed musically. There’s a great, consistent narrative flow, which sometimes borders on a cinematic kind of approach and feeling. I love how it never really goes fully into a cinematic mindset, though. How it only takes cues from there, as it keeps the entire action grounded in the music, only receiving marginal input from each listener’s imagination as icing on the cake.

Nostrum is a highly diversified musical journey as well. This isn’t the type of progressive death which focuses on virtuosic displays of musicianship. As mentioned earlier, the record shines brightest in its sense of balance. It’s written with a lot of good taste. The focus shifts quite naturally between rhythm, melody, and overall structure. We’re also not looking at something that insists on keeping everything at a very fast tempo. Overall, it’s a fairly laid-back album in terms of tempo – at least when compared to most albums within this area. While for the most part this aspect is consistent, there are variations which play well with the narrative and the overall pacing of the album.

I think that the other highlight is the emotive content. The record manages to show that it can convey a rather large palette of feelings. I love that – a lot of death metal albums fall into a linearity of being simply brutal or heavy, with no regard other than the one for sheer aggression. There are transitions between dark, eerie, and obscured textures, throughout almost uplifting and nearly epic moments – all the way to entirely surreal and otherworldly soundscapes. I’d honestly love to name some examples of songs for each of the things I have said, however, considering the layout of the album, that would be an exhaustive track-by-track analytical essay. This is also difficult due to the fact that, while the various influences are scattered throughout the record, it kind of flows as a single unit. Honestly, on my second listen I could barely even notice the transitions between songs.

Nostrum is a whole journey, and I would go so far as to say that it is an experience. This is exactly the type of statement I want a prog death album to wring out of me. Dialogia show a solid amount of promise with their debut. Not a lot of bands manage to pack such a cohesive and well-planned sonic output on their first go. Hell, not a lot of bands manage to do that several albums into their careers. While I’m looking forward to what this band has to offer in the future, I’ll be keeping Nostrum on repeat – I suggest you do the same.