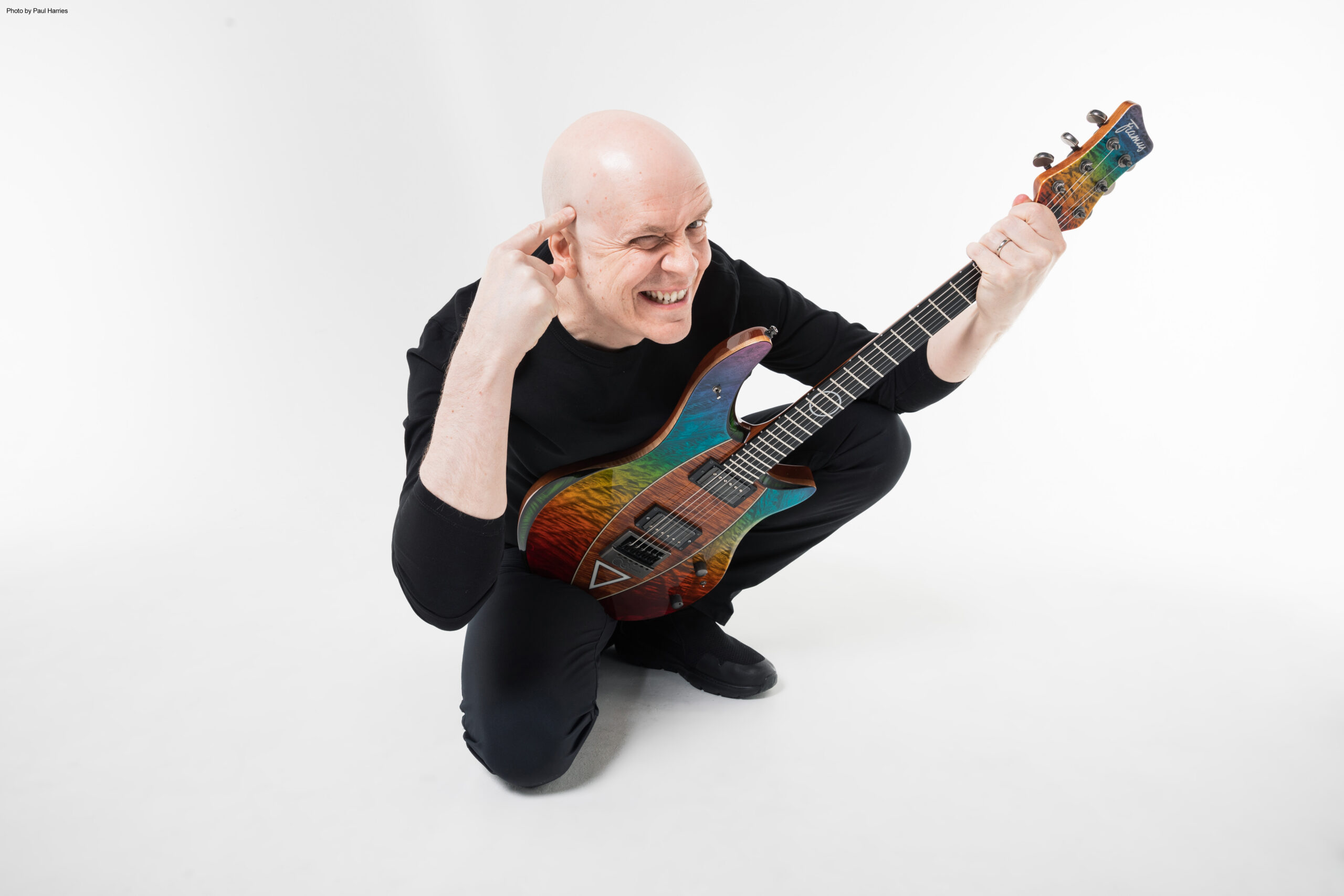 By David RodriguezDecember 5, 2022 No Comments

As a rebuke to the chaos of the world, Devin Townsend delivers two complementary albums that house some of the most peaceful, arresting, and emotional music in his entire storied and varied career.

I’ve never been one to put stock in positive affirmations. Nothing against them, I just don’t feel benefits from stating things I either at least subconsciously know or don’t fully believe. I don’t speak goodness into the universe, nor do I pray. Inversely, I also don’t believe in ‘borrowing trouble’ because I said something remotely negative or considered a potential unideal outcome. That said, I do have hope. I have dreams. I wish for things to get better, but know that wishes alone won’t deliver us a better world. I’m just here to do what I can to help those in my life, just as they help me. Positivity in general doesn’t factor in much.

This is the philosophy by which Devin Townsend has been working into a new level of appreciation for me, despite my personal opinions and thoughts. For years, even if Devy’s music retained a heavy nature, he’s had a very sunny, positive spin on his lyrics and themes, reflective of the better outlook he’d gained from working on himself as a person, shedding his demons, and acknowledging mental illness he had long suffered from. It came to a head with Empath, which I enthusiastically reviewed a few years ago. Lightwork is the official follow-up to that album despite releasing a couple other projects between then and now, including a number of live albums (including the phenomenal Deconstruction Series #2 – Galactic Quarantine, which shows exactly why he’s one of the best performers our generation has seen).

In a very rare moment, I’m actually talking about a deluxe edition of an album, which pairs Lightwork with a companion of B-sides and demos worthy of not only talking about to begin with, but outright praise. It’s called Nightwork and shines a light (ha?) on the creative process that Devy had with producer/pal Garth Richardson to craft an album so amazing, even its leftovers were worth sharing. Throughout each one, you’ll hear some familiar faces/voices – Ché Aimee Dorval of Casualties of Cool fame, Steve Vai, The Elektra Women’s Choir from Empath, and of course Anneke van Giersbergen, who is a frequent collaborator. Both albums as a result are a journey of life in the last few years, informed by the pandemic and its effects on us, focusing on what’s important, and finding – and maintaining – your center to persevere through it all.

Each and every song on Lightwork, while not made equal, does have a place in the tracklist. Ten songs and just shy of 56 minutes, they take what made Empath (and other works) so enthralling and, generally speaking, strips them back a bit more than you’re probably used to if you’re a fan of Townsend. Yes, grand orchestrations are still abound, a massive soundscape for them to occupy along with more traditional rock fare, and Devy’s own voice, which would fill all of that space itself if it wanted to. It’s arena-ready, manufactured to reach beyond the nosebleeds, outside the ZIP code it’s broadcasting from, on high into the stars like a transmission to other life out there. Lightwork feels like it could be echoing in the craggy hills of Mars.

Take a song like the almost title track “Lightworker” and you see exactly the kind of thing Townsend is going for. It’s a song about love, peace, and unity – not wanting for your needs and coming together. “Call of the Void” is a slow charmer, gentle and grounded in its approach to valuing your own view on things and not give into panic. It also has one of the most charming videos – using footage of trains driving through snowy wilderness, a fixation that Townsend developed while working over the pandemic as escapism – and best hooks on the album:

‘‘Cause when you see the world’s insane reaction
To follow your heart, the worst reaction is to freak out
So don’t you freak out‘

This is what I’m trying to achieve as I type this on election night.

The darker moments are enchanting as well. “Dimensions” is more heavy and aggressive, but still shimmers in the light with its synthy foundation and how it builds up in a way that reminds me of a Pendulum track. A couple tracks employ more of a chanting and repetitive element to lyrics and motions like “Dimensions” or “Heavy Burden” to drive a point home in a mantra-like fashion, but also acknowledge and calm, much like positive affirmations can. In case it wasn’t obvious, Devy was a little less concerned with being cleanly progressive and/or metal with Lightwork (stay tuned for Nightwork, though), instead electing more of a contemporary, ambient, and indie feel at times. It makes sense and is good.

The most impressive aspect of it all is that it manages to never skirt into corny territory. It’s so sickeningly genuine and heartfelt – you can tell this is just where Townsend is at nowadays, and him sharing it with the world is not only a healing endeavor for him, but wishes it to be for the rest of us who climb on board. That’s some sage shit. I get pretty easily overwhelmed emotionally by this music and have ever since Transcendence. By the time the ten-minute closer “Children of God” hits, you feel enlightened in terms of metaphorical weight and perhaps spiritually as well, broken open to vent out the frustrations of existence and breathe in a tranquility that’s rarefied and substantial. It’s a sublime end to an otherworldly piece of work, as welcoming as it is guiding. Townsend’s final words sum up the ethos of Lightwork quite well: ‘Free your mind/Please be kind/Love‘.

For Nightwork, older fans of Devin Townsend – including The Devin Townsend Band and Devin Townsend Project – will feel right at home… mostly. Starting right off with the ripping “Starchasm, Pt. 2”, a sequel to a song off his enigmatic 2021 project The Puzzle. Faster guitars, double kick drums, more powerful and yelled vocals, more progressive structure – this is classic-ass Devy, and I love it. It leads right into the bridging “Stampys Blaster”, a frenetic blast indeed at less than a minute, and connects with “Factions”, a similarly impactful track that’s a full-on metal rager that could fit in with Townsend’s wondrous 2000s output (shit, any of these aforementioned songs could even be Strapping Young Lad tracks with some lyrical and instrumental tweaks).

But that’s not what I want to talk about, because we all know it’s good and it’s there if you want it if Lightwork felt lacking to you (I get it). What I’d love to talk about is the damn EDM track that Devin Townsend made in complete earnest, and it’s actually really, really good. “Precious Sardine” is what it’s called, sitting pretty in the middle of Nightwork‘s tracklist, and it’s the most impressive, intriguing listen between both albums. It starts out unassuming enough, much more in line with Lightwork‘s endearing touch with lyrics about the pandemic, but a couple minutes in, rhythms shift into a bona fide EDM song with some minor glitching and sampling – before you know it, you’re faced with one of the best songs Townsend has made yet. It’s thumping and pulsing, genuinely danceable and fun. With no irony, I can say he could be a DJ next year with a few more tracks like this (for the rest of you, there’s some heavy guitar chugga-chugs toward the end of the track).

Really, it’s this sort of spirited exploration and experimentation that’s defined much of Devin Townsend‘s career. Personal taste aside, you can’t say the man has never not committed to something he tries, and like all visionaries, he leaves an immense vault’s worth of work on the cutting room floor, stuff that could still see the light of day with polish and a project to throw it onto that makes sense. Townsend knows he asks a lot of his fans, to go with him on these excursions, be patient and, sometimes, just let him have this one for his own creative sake. It’s very cute, Canadian apologia of him, but he’s also just incredibly humble with his fanbase, and while his work is foremost a distillation of his own experience, he does wish for it to connect with his listeners. If not, no hard feelings.

At the end of R.A.P. Music, Killer Mike talks about how (rap) music is the closest he’s gotten to a religious experience and feeling God. In that sense, Lightwork and Nightwork are the logical conclusions of trying to make music with that intent. I was long in need of a new Devin Townsend project (lowercase – DTP has been shuttered for some time now) to grab me by the hair, nicely, and bring me to a whole new level of appreciation of the time we’re in, life itself, music, and Townsend as an artist. It just has an unrestrained beauty to it that shouldn’t be lost in the mess of personal expectations. Devy is in a, frankly, much better and more healthy place in recent years, and it shows. I personally don’t subscribe to the mindsets that he seems to, but I’ll gladly play along as long as the music is as good as it is.