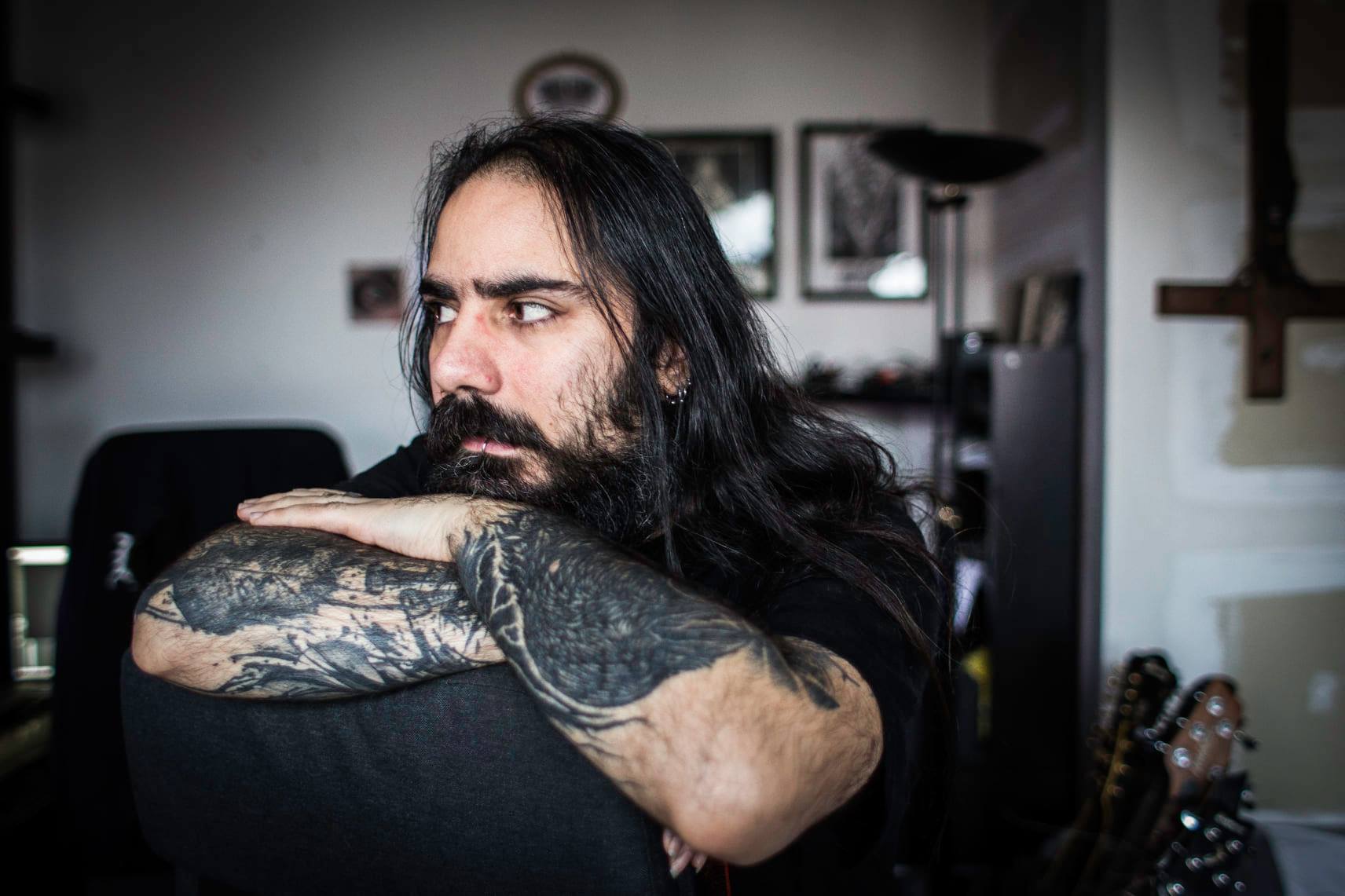 By Nick GoslingApril 3, 2021 No Comments

In just over a year, Déhà amassed an opus of such unrivaled breadth and beauty that it almost defies belief. A seminal release, Cruel Words is not only a landmark of his emotionally punishing œuvre, it is also one of the most uncompromising post-metal releases in recent memory.

When people in my social circles talk about prolific artists, they are generally talking about names like Buckethead, King Gizzard and the Lizzard Wizzard, or Omar Rodríguez-López. When I talk about prolific artists, I talk about Olmo Lipani, known otherwise as Déhà. The output of the Belgian post-metal demiurge in the past 18 months is nothing short of astounding – he released over 30 albums, EPs, and collabs in that time! – and he is one of the most consistently captivating artists active in the European underground today. When I first discovered the mesmeric A Fleur De Peau – I – There Is No Home, one of his finest releases in my opinion and a must-hear moment in the wider post-metal canon, it was easy to fall down the proverbial rabbit hole, not just of his work under the Déhà moniker, but as a contributor to countless other works, too.

2021 has been a somewhat quieter affair – just the three releases thus far – and perhaps a relatively restrained output this year will allow the reissue of his seminal 2019 album Cruel Words the service and attention it deserves, especially given how his extended catalog has allowed it to become somewhat buried amongst the crowd for prospective listeners. Despite my admiration for some of his works, such is the extent of his output that I can count myself among those who had previously passed this brilliant album by.

Those amongst our readership that are already in the know about Déhà may well be frothing at the mouth at the prospect of a new double LP vinyl release, but for those who are new to his works, and those who are just now discovering this album, I would like to use this opportunity to formally introduce you to an unsung goliath. Journey with me to uncover one of his finest vintages.

Rooted in the ruminant dirge of atmospheric doom, Cruel Words carries the bleakness and solemnity that is intrinsic to the world of post-metal. This emotional burden is always difficult to shake off, even once the final curtain is drawn. Much of Déhà‘s work is built upon shifting layers of visceral impact, cascading delicately through clean passages to tug at vulnerable hearts, and ripping through sonic barriers with hardened yet pensive sludge. The lines between sub-genres of metal are so easily blurred that it’s often hard to define exactly what category an artist falls under, especially considering the scope of influence they often pull from. Déhà is one such artist – despite my attempts to pigeonhole his work, it feels like a disservice to apply such labels. With that in mind, it seems more appropriate to simply consider his music alongside other artists such as Violet Cold, Bell Witch, and Amenra that place an emphasis on bleak emotional outpouring. If any of the above float your boat, I can guarantee Déhà will too.

Album opener “I Am Mine To Break” is a defining summary of this sound. From the off I thought to myself: ‘my emotions are about to take a real beating here‘, and I was not wrong. Dulcet, melancholic guitars are a sombre canvas atop which Lipani’s deep and soulful voice paints his emotional burdens bare. Rising to a stunning denouement, the track reaches its zenith with a sheer wall of euphoric distortion. The slow-burning nature of the album demands emotional investment, which makes the swells of euphoria an even greater payoff when they are delivered. What allows this project to really stand out amongst its peers, however, is the distinctly human quality it carries. Lipani captures the full scope of his inner turmoil through a powerful dynamic range and intensely personal lyricism, on this occasion dealing with the crawling spectre of depression. His command of affecting music is something to be admired, but the centrepiece is his phenomenal vocal performance throughout.

As is the standard with artists of this ilk, tracks are typically drawn out up to the ten-minute mark and beyond, and this frequently induces a hypnotic quality. Fans of post-metal and doom will know this concept well, with haunted, shrieked vocals and melancholic sequences gnawing repeatedly at the senses, drawing you further into the music’s oppressive haze whilst the dichotomy of strength and frailty covers all the bases of the depressive essence. In truth, it’s all about emotional narrative. Sad scenes in movies are, by themselves, somewhat unmoving, but at the apex of a meticulously crafted journey, these moments can be utterly heartbreaking. I concede that I felt this on several occasions during this album, especially towards its end.

Truly, I could list any of the tracks from this album as a highlight, but this is an album that needs to be experienced as a whole. Once again I am brought back to the concept of investment. Cruel Words is an album that should not be heard in passing, nor as an episodic experience – it is a deluge to be embraced. It is akin to those moments in life that you initially dread, when the mounting of prolonged stresses and woes grows too great to contain, and for a moment you let loose and find comfort in the arms of relief.

Déhà is a name that I wouldn’t be surprised if you’d never heard of it before; I myself only came across him rather casually as I shuffled through Bandcamp looking for something miserable to listen to. But I hope the name will carve its way into your memory from this point onwards. If, like me, you are drawn to the catharsis and emotional release found in extreme music, then Cruel Words is for you. It’s an album that will stay with you for as long as your despondence takes to subside, and hopefully, it will act as a gateway into the ever-expanding universe of Déhà.