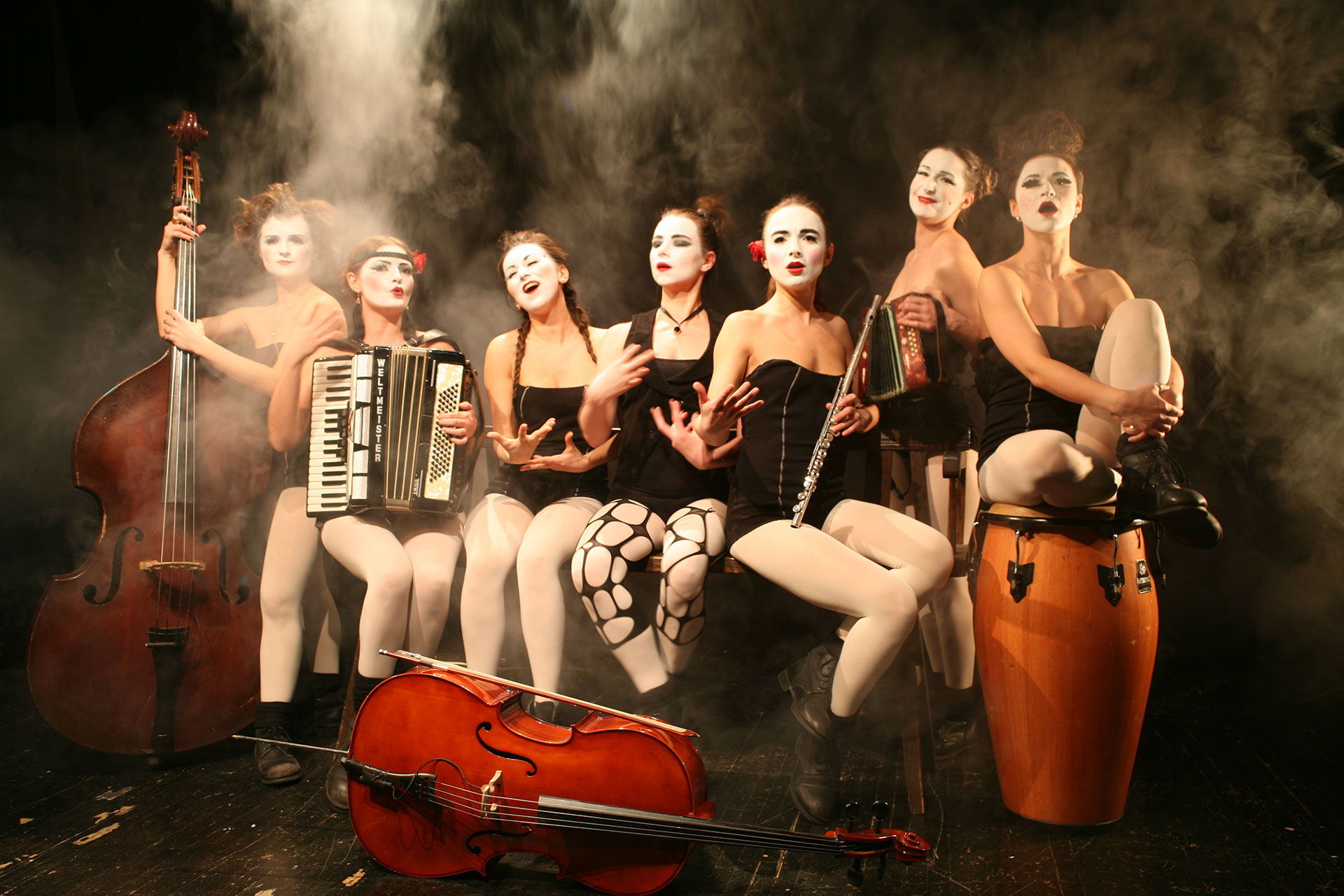 By Robert MiklosFebruary 25, 2021 No Comments

Make Up makes up for all the time we went on without a new Dakh Daughters album. Tune in for some truly unique sounds.

I’ve met few people (if any at all) who had any idea what I’m speaking of when I mention Dakh Daughters. Therefore, it stands to reason that a more informative introduction is necessary before anything else. Dakh Daughters are something of an interdisciplinary artistic group which connects the world of music with the thespian one. The members of the band are part of the Dakh Theater from Kiev, Ukraine and other projects, so naturally now they have stepped into the realm of sound as well. They have been around for the past nine years as a band and the all-female lineup consists of: Nina Harenetska, Ruslana Khazipova, Tanya Havrylyuk, Solomia Melnyk, Anna Nikitina, Natalia Halanevych, and Zo. The band plays on a great variety of instruments – up to fifteen from what I can gather.

Dakh Daughters also sing in different languages (English, French, Russian, German) and dialects of Ukrainian. Within their works we can see the recurring presence of texts and segments from famous authors such as Taras Shevchenko, William Shakespeare, Iosip Brodsky, and Charles Bukowski to name some. If right around now you aren’t already convinced that this whole affair is one huge adventure, then I’m sorry to put it so bluntly – but – you’re in the wrong place.

The band rose to fame following a music video they released on YouTube for a song titled “Rozy/Donbass”, which is based around Ukrainian folk songs (like a fair amount of their songs) and Shakespeare‘s Sonnet 35. Shortly after the video became mainstream, a friend showed it to me. I was instantly in love. This was simply something I’ve never seen before. Such a wild and nuanced mixture of artistic deliveries is bound to not go unnoticed and appreciated. Just recently, “Rozy/Donbass” – now simply titled “Rozy” – made it on the band’s third full-length record. Make Up is their newest album and it’s every bit as good as any of the previous material.

The band’s sound could be described as a vague territory which has a reach spanning through freak folk, dark cabaret, experimental/avant-pop, world music, chamber music, and maybe even a pinch of ethereal darkwave. Don’t take my word for it, I’m not the best at labeling things and stylistic labels are pretty plastic and obsolete in certain aspects. In hopes of a more palpable analogy, picture that the band is a distant relative of The Tiger Lillies and CocoRosie, although I have doubts this is a more apt descriptor. Make Up takes a more refined and atmosphere oriented route, albeit not a necessarily new one when compared to If and AIR, even if the focus shifted a little from more lively deliveries towards an emphasis on emotive exploration. In terms of instrumentation, we’re met with the same level of variety as before, which is akin to listening to an extended chamber orchestra.

I think that the overall mood of the record is appropriately encapsulated within the essence of “Nemaye chasu”. It’s one of the band’s longest songs, as well as the longest one on this album. There’s definitely something of a quasi-orchestral feeling to it as it expands voluptuously and virtually teleports the listener to basically another realm. That Ukrainian folk element I mentioned above also makes a stellar appearance here and it gives us something nigh mystic to hold on to throughout. I would also like to note that “Rozy” and “Vals Alisy” make a more obvious usage of this Ukrainian folk element as it transpires through the vocal harmonies. Throughout the record I feel like there’s something of a lingering morose vibe which can come across as nostalgic or pensive at times, as if the album itself can’t decide it feels in any specific way, but rather as a twisted amalgamation.

While the album starts out with nothing really unusual as far as the band’s standard is concerned, it does leave the impression that in its shifted focus, it accents a narrative feeling of some sort; a binding quality between the songs and a flowing characteristic I can’t describe otherwise. It really picks up near the end and you can tell that the band is basically firing on all cylinders with the title track, “Make Up”, and then it all ends triumphantly with “Rozy”. I could have never imagined a better ending track than that, it epitomizes powerfully all the abilities of the band and slaps them all across with a loud bang.

I would definitely enjoy just listening to the music at hand, but I’m more than certain that this is one of those bands that’s a bucket list level act to be experienced in a live setting. It would go without saying that I’d go out of my way to catch a concert. Hopefully the world will be back to normal later this year, or latest early in the next and we’ll all get to see what we long for. Anyway, I went on for long enough – if you resonated with any of the things I said hit play and enjoy!