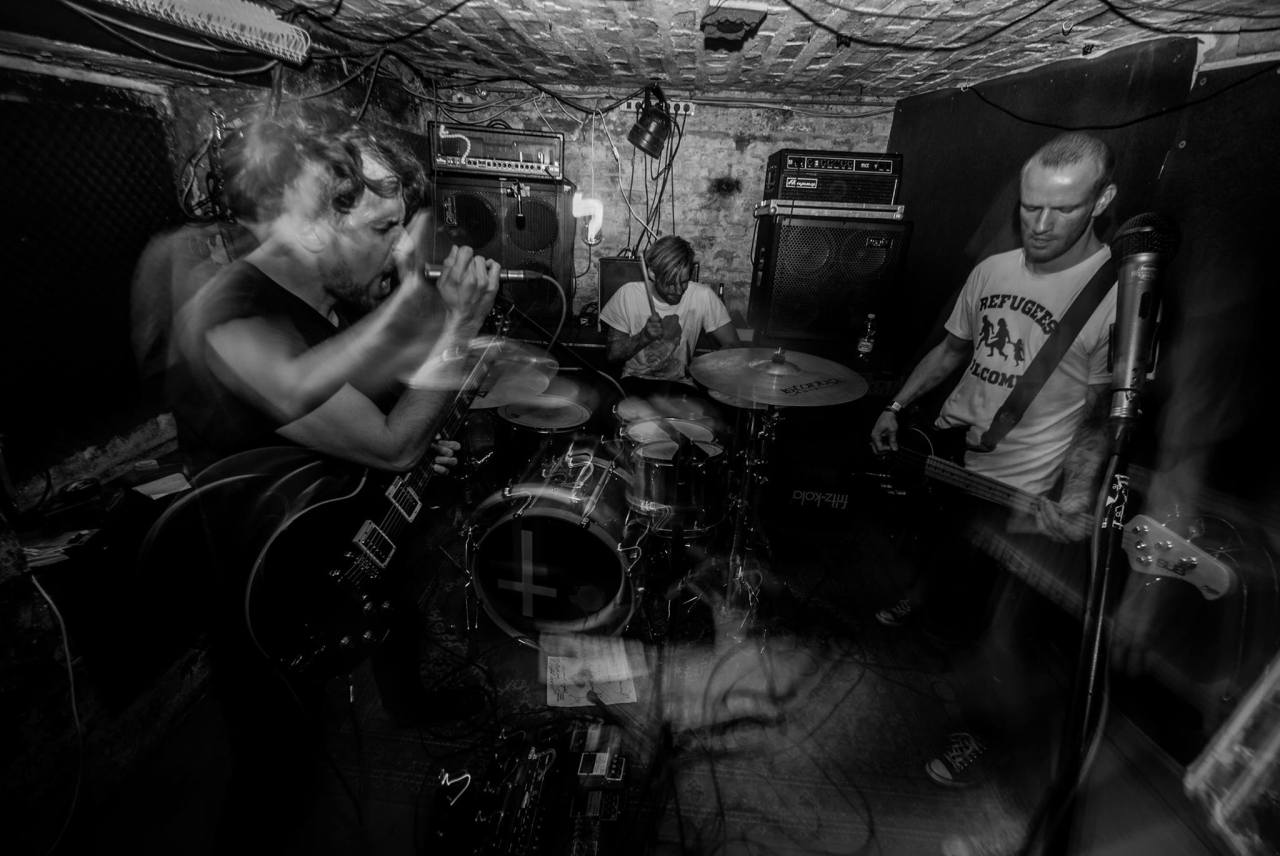 Colored Moth are intense and fierce. They’re not so much angry as rightfully enraged. DIM is tight, muscular, and sticky, but at the same time very cerebral.

I don’t know how this happened, really, but there’s definitely way too many bands in the world these days. So many bands and so many records in fact that sometimes it’s really hard to feel anything listening to music. But somehow, somewhere, sometimes the stars seem to align for a particular record. That’s where Colored Moth come in.

I’m not even sure if Colored Moth are it. Maybe they’re not. Maybe you’ll play their record and feel robbed, in that by no means will their music ever correspond to your high expectations. But I do know that during those first few chords of “Letter to Aldous”, something inside me moved. That riff that somehow seems to conjure the best of hardcore and noise all at once, blending with the drums when they kick in and the sarcastic despair on the singer’s voice, all melted up inside. From then on, the mood was set. It was a good mood – caustic, just the way it should be. A kind of smug ‘I-told-you-so’ while watching everything turn to shit, but going all in until the very end regardless.

The best thing is that these guys get that lyrics matter! They openly display them on their Bandcamp page – without any kind of complex – for everyone to read; they also explain what the hell the songs are about. In their case, that’s definitely a good thing. Not just because you can finally decypher what all the yelling is about, but also because you can be happy knowing that you’re singing about stuff that matters for once. Whether it’s the digitalization of society (see “Letter to Aldous”), the critique of social Darwinism, or the indifference of man: there’s a subliminal theme that underlies all their songs, and amidst their justifiably pessimistic view of the world there’s also quite a bit of intellect instead of simple bashing. This is something a lot of bands are missing these days. Colored Moth are like the cheerleader/jock with brains, or the geek with the looks, in the sense that they feel smart and sexy all at once.

A lot like the themes of their songs, their music goes everywhere. You can’t really pin DIM down to just one genre, because there are no walls strong enough to contain these three Berlin guys. There’s a noise-rock matrix that sometimes falls into a kind of skramz mode, while at other times they’re like a post-hardcore band, whatever the hell that means in this day and age. I guess it means it’s hardcore after the fact, but they’re more than the sum of those parts, lacking nothing in identity.

What matters is that these three dudes are intense and fierce. They’re not so much angry as rightfully enraged, which is something different. Their music is tight, muscular, and sticky, but at the same time very cerebral. Amidst all the crumbling and the disintegration that happens suddenly and all at once on DIM, there are also a few kind of spooky ambient interludes that keep the listener’s brain from melting the individual songs into one long, indistinguishable diatribe. Colored Moth surely played their cards right by including these, because that way their songs do sound separate and have clear identities, making them recognizable instead of just plain textures. Considering that this is the band’s third effort, it makes sense that they have clearly gained maturity in a way that made them more aware of what brings out the qualities of their music. With DIM, Colored Moth ‘narrate the dim fading of colours, yet fighting against it at the same time having colour in its name‘.

Released by the great Wolves and Vibrancy Records, home of Hexis, Thisquietarmy, and Trautonist, Colored Moth’s DIM could easily play in the same league as early Metz or Protomartyr, but where the former tend towards rock and the latter towards The Bad Seeds post-punk, the Berlin trio sounds firmly rooted in hardcore, without falling into the usual traps of said genre. Quoting John F. Kennedy – something that should make no sense on a piece about rock music, but actually does in this one – ‘Ich bin ein Berliner’, because this is music to make walls crumble and reunite opposites, just like it happened in the history of Berlin, Colored Moth‘s home town.