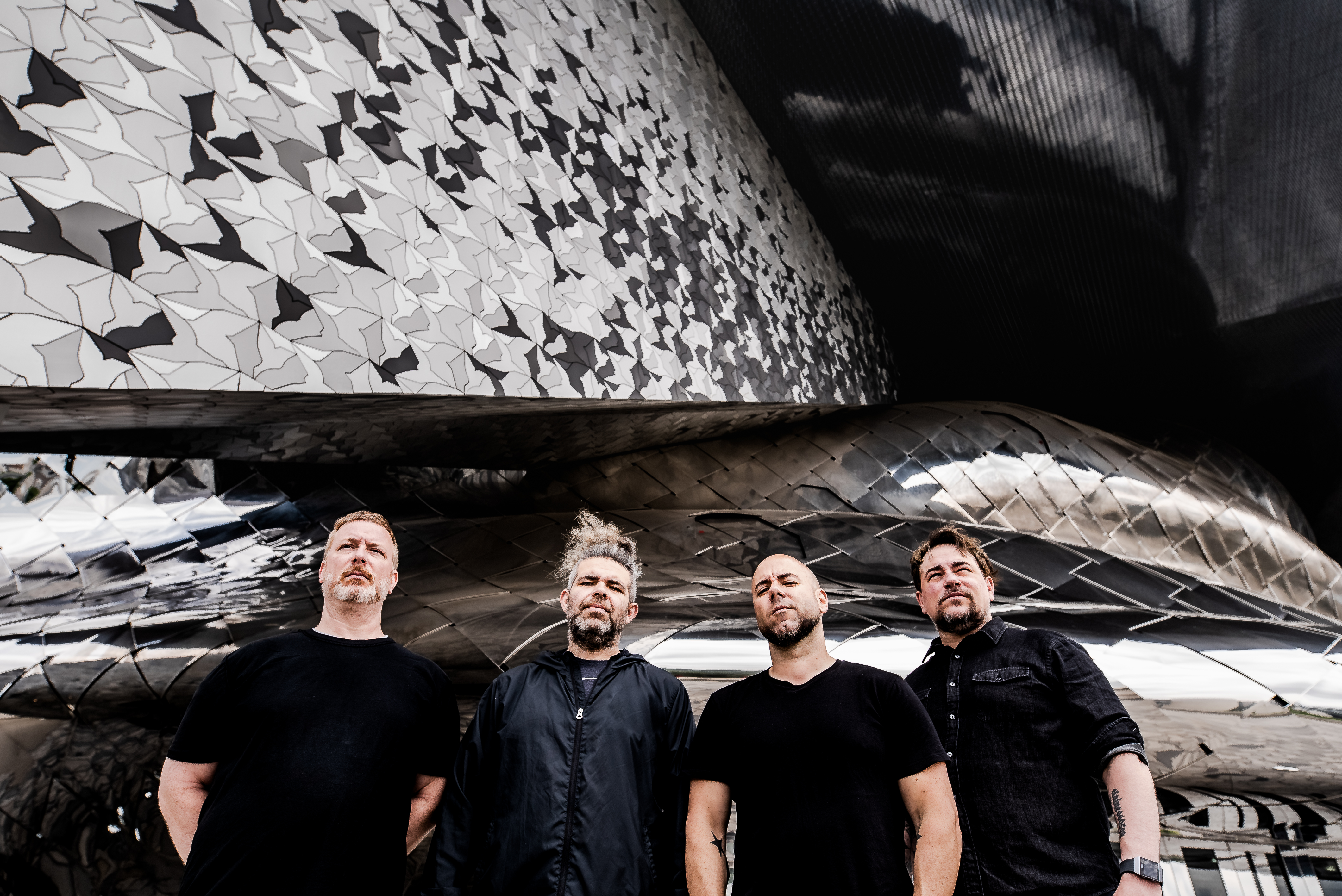 By Ashley JacobSeptember 23, 2019 No Comments

It didn’t take much for them to grab our attention. Fans pounced on the announcement of a new Car Bomb album all those months back, and so came the resulting trickle-feed of new material. It started with the reassuringly familiar ‘pew pew’s of “Dissect Yourself”, continued in the ground-pounding brutality of “Scattered Sprites”, and most recently hit us third-fold in “HeLa”. For the several people anticipating the feature-length opus of Mordial, these preliminary treats have served as a continuous and confident promise to fans that Car Bomb chapter four will be a very special affair.

As a result, you are all increasingly convinced that Mordial will be exceptional. I’m pleased to announce that your expectations are not misplaced – Mordial is a stunner.

Firstly, you can say goodbye to your single tracks. I mean in the sense of them being standalone entities. Once embedded in the full cluster of Mordial‘s twelve-song tenure, those tracks you’ve already heard, as if by some form of wizardry, take on a new sense of purpose when pressed against numbers of like-minded constructs. So despite the amount of times you’ve already hit repeat, you’re destined to hear them in a new light during the full course of the record.

Hello tip! Now for the rest of the iceberg…

Here’s what’s new. There’s an ambient intro, aptly named “Start”, which is not the instantaneous explosion of riffage heard on the past three Car Bomb albums, but an out-there soundscape that lulls you into a misplaced feeling of nicety for the handful of moments before it wobbles into black hole uncertainty. This, my friends, is a recurring theme of Mordial. The mathematical wildness of this album is bound by a greater, more epic and almost orchestral sense of being, the exact meaning behind which isn’t set in stone, and never will be.

Thus, Mordial is a puzzle, a 3D jigsaw, the complexity of which appears to be conveyed nicely in the eye-bending visuals of their accompanying new music videos. Alongside the wrought emotion is an equal level of abstraction. I don’t know what Mike Dafferner is trying to convey when he screams ‘X O X O X O‘ before elegantly singing ‘Y‘ within the song of near enough the same name. All I know is that he’s discharging guts and marrow into those vocals. Listen, and listen good for more similar examples, and then personal interpretations will be yours to keep! What matters most is that you’re strapped in for the ride, and loving it.

That first loud ‘Car Bomb are back‘ moment doesn’t take long to hit after the intro of “Start”. “Fade Out” unleashes brutality and low-end beastliness with consummate professionalism. As the first clean-sung lyrics hit, you may find them jarringly rustic compared to the angelic chorus of Meta‘s opening track “From the Dust of This Planet”. Be assured, however, that this is merely part of the effect. You’ll get your fill of beauty within the beast, make no mistake, and not just in Dafferner’s vocals but in every fibre of Mordial‘s being. The trick is that no idea is used twice. Every passing track following the album’s opening segment offers something new. The machine gun bursts of “Vague Skies” make for a wholly different experience to its predecessor, and that punishingly cybernetic guitar tone used exclusively on “Scattered Sprites” could suggest that that particular song jumped ship from a different record altogether.

I could go on and on; it’s hard to describe each track using only a handful of adjectives, because every song is a world unto its own. “Blackened Battery” is mostly hard as hell. The foreboding verses of “Mordial”, mixed with its harmonious chorus, make it a largely ominous and emotive affair. That emotive sense re-emerges tenfold within “Antipatterns”, and so on and so forth, but there is more still, happening in each of these titles. In this sense, Mordial is classic Car Bomb. It’s the welcomed resurgence of the sporadic patchwork, cut-and-paste nature of their composition which has served them loyally since the days of Centralia. It’s also the ID to their sound which has always kept them unique and reputably gigantic in the world of metal.

What’s miraculous is that they pushed everything even further, and I mean everything. The album heralds a clear evolutionary step in what Car Bomb can achieve. It was only natural that they upped the riff game, but coming at us from a very heartfelt part of their musical stockpile is also the ambience, the cleanliness, and the melody, which blossomed on ‘w^w^^w^w’ and fully came to fruition on Meta. After grateful fan feedback, it is now officially part of the Car Bomb repertoire, and Mordial incorporates it with the neatest and – dare I say – most pleasing level of attentiveness so far in their career. As I already explained, it’s hard to pinpoint an exact song which champions this soulful trait, as it’s used across the board, inspiringly, beautifully, never repetitively, and in thirst-quenching abundance.

Also weird, disturbing, and wonderful is the way in which many of their songs, particularly those towards the beginning and the end of Mordial, undergo a kind of put-through-the-warp treatment. In these instances, perfectly reasonable melodies and progressions wobble, fall out of key, and generally take a sideways dive from musical sensibility and into surrealism, in the best possible way of course. Try and imagine that point in your dream when it suddenly turns into a nightmare, but it happens in such a cool way that you want to tell your friends about it the next day!

These moments cement the idea that Mordial is an entity exempt from the more grounded nuances of metal composition. Don’t expect any apologies to be made along the way. Suddenly we gather an intuitive notion that it would be crime not to put these already lovely tracks through the event-horizon blender.

Going onward, the treasures continue. Mordial is full of neat tricks. Did I mention that already? Ultimately, you’ll have to discover them for yourself, and do so across the entire breadth of the record, because they aren’t all jammed into the first three songs. The consistency of quality runs from prologue to epilogue, so there is no section of this album you can afford to snooze on. It ain’t all gonna sink in the first time you hear it either. You’ll have to crank it front-to-back and get fully acquainted for an indefinite period. Maybe after the tenth or eleventh listen, you’ll get the gist, but you love Car Bomb, so you’ll willingly make that commitment.

Car Bomb had a reputation to uphold, a devout following to please, and a fierce back catalogue to best. That’s a hell of a task. I can’t say for certain that that’s how they felt about it, but it doesn’t really matter anyway, because they smashed it all the same. There’s no bad take on Mordial, and no way to deny that it lives up to the daunting expectations. It packs that punch, it hits that spot, and it proves in Car Bomb‘s great tradition that brutal, sawn-off heaviness can be as cerebral anything else on your playlist. Praise to them for keeping that energy, and for maintaining the cathartic relationship between music and those listening to it. It’s the vicious metal record we all wanted, and a mile more beyond that. You, the listener, have a big task ahead of you. Take your time, soak it in, but whatever else you do, do not miss even a moment of this amazing classic-bound piece of work! All hail Mordial! It’s the one.