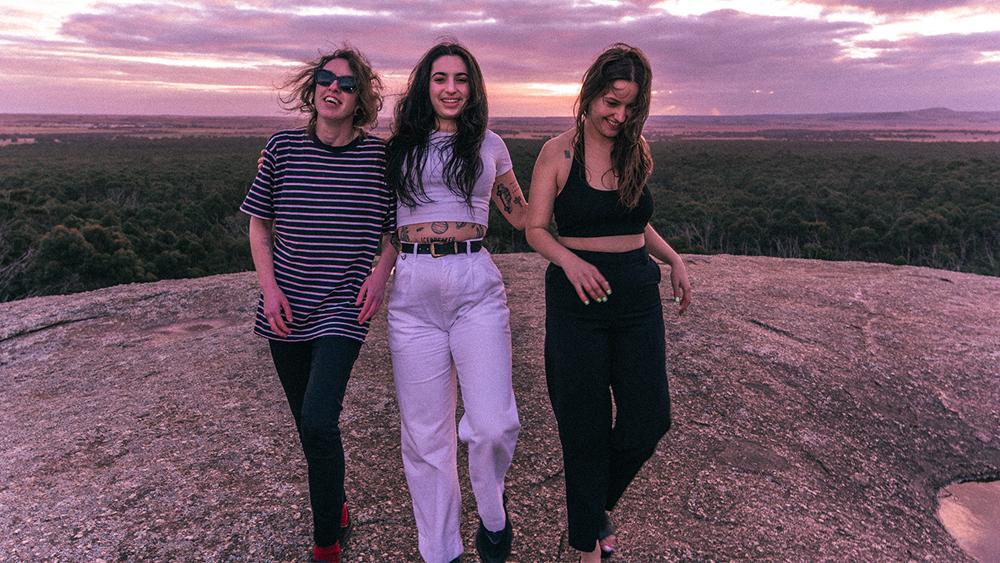 Camp Cope – “Running with the Hurricane”

By Carlos Vélez-CancelApril 11, 2022 No Comments

Let Camp Cope show you how to properly ‘tone it down’ without sacrificing integrity. The power emo trio reflect on vulnerability, acceptance, and growth in the most stellar fashion with Running with the Hurricane.

There is something so charming about Camp Cope that I can’t quite put my finger on. Ever since I crossed paths with “Jet Fuel Can’t Melt Steel Beams” off their self-titled debut and, consequently, their sophomore release How to Socialize & Make Friends, there hasn’t been a moment where I haven’t revisited their music in even the most random of circumstances. Sure, it might be their jangly take on power pop that is infectious and merits being listened to repeatedly, though I would lean more towards the fact that there is intention behind the catchiness that always feels real, cathartic, and unapologetic. Listening to their catalogue is like an ache that you find yourself returning to from time to time – settling in its memories, reflecting on them, and kind of identifying the patterns that made you who you are to this day.

Curiously enough, this very exercise of uninterrupted contemplation reigns within Running with the Hurricane, as the trio steps back a bit and lays out a collection of songs that patiently simmers, wanders, and soars with a tact so comforting that it is pretty much inevitable to remain in its embrace until the end of the album. Granted, there is still a bite to these tracks that’s characteristically Camp Cope – it’s just that it is redirected towards other, more introspective lairs.

Taking your hand and introducing you to the overall atmosphere of the album is the opener, “Caroline”. Although on a gentler pace than previous efforts, the band wastes no time in being upfront with their state of vulnerability through the song’s croons about lingering longing. Coupled with a warm production akin to sunbathing and open instrumentation that lets you fully take in the message and emotions behind it, there is a hopeful undertone to this moment of realization that sides more with the feeling of acceptance rather than defeat, and this a feat that ends up prevalent throughout Running with the Hurricane.

And it’s this swaying between solemn self-acknowledgement and sudden spikes of optimism that works so well for this album – you’ll find it difficult not to relate to it thanks to the sheer sincerity found throughout. Tracks such as the insanely catchy “Blue” and the satisfyingly straightforward “Love Like You Do” expose the conundrums one inevitably faces when demonstrating some sort of affection, while the cathartic “The Screaming Planet” churns out a confessional ode to taking a breather and finding solace in a world brimming with constant contradictions. Again, self-blame is not an endgame here – this album is not crafted out of culpability and resentment. Each track clearly shows a sense of awareness and accountability that normalizes these often conflicting feelings.

The album reaches at its peak with its last three tracks, to which the first of the bunch is fittingly titled “The Mountain”. The engrossing display of heart here makes for a deeply moving listen, only elevated by the trademark Camp Cope falsettos that, frankly, put you in a state of complete ascension. “Say the Line”, with its steady, emo-tinged indie pace, treasures the thrill of loving with no regards to its possible messy consequences, while the emotional closer “Sing Your Heart Out” ties it all together with a celebratory nod to vulnerability, acceptance, letting go, and the act of being present, all amidst a gorgeous piano ballad and culminating with a memorable send-off coming from the trio:

‘You are not your past, not your mistakes
Not your money, not your pain
Not the years you spent inside
You can change and so can I.’

The intent behind Running with the Hurricane is precisely in its name – not letting the imminence of life’s travesties stop you from experiencing life itself. It’s the act of finding reassurance amidst the chaos, or owning one’s past mistakes because, sure enough, everyone fucks up at some point in their lives. It’s a homage to imperfection not for the sake of complacency, but of the drive to discover the beauty in the human experience because there’s something magical – and brave, even – in singing off-key every once in a while.