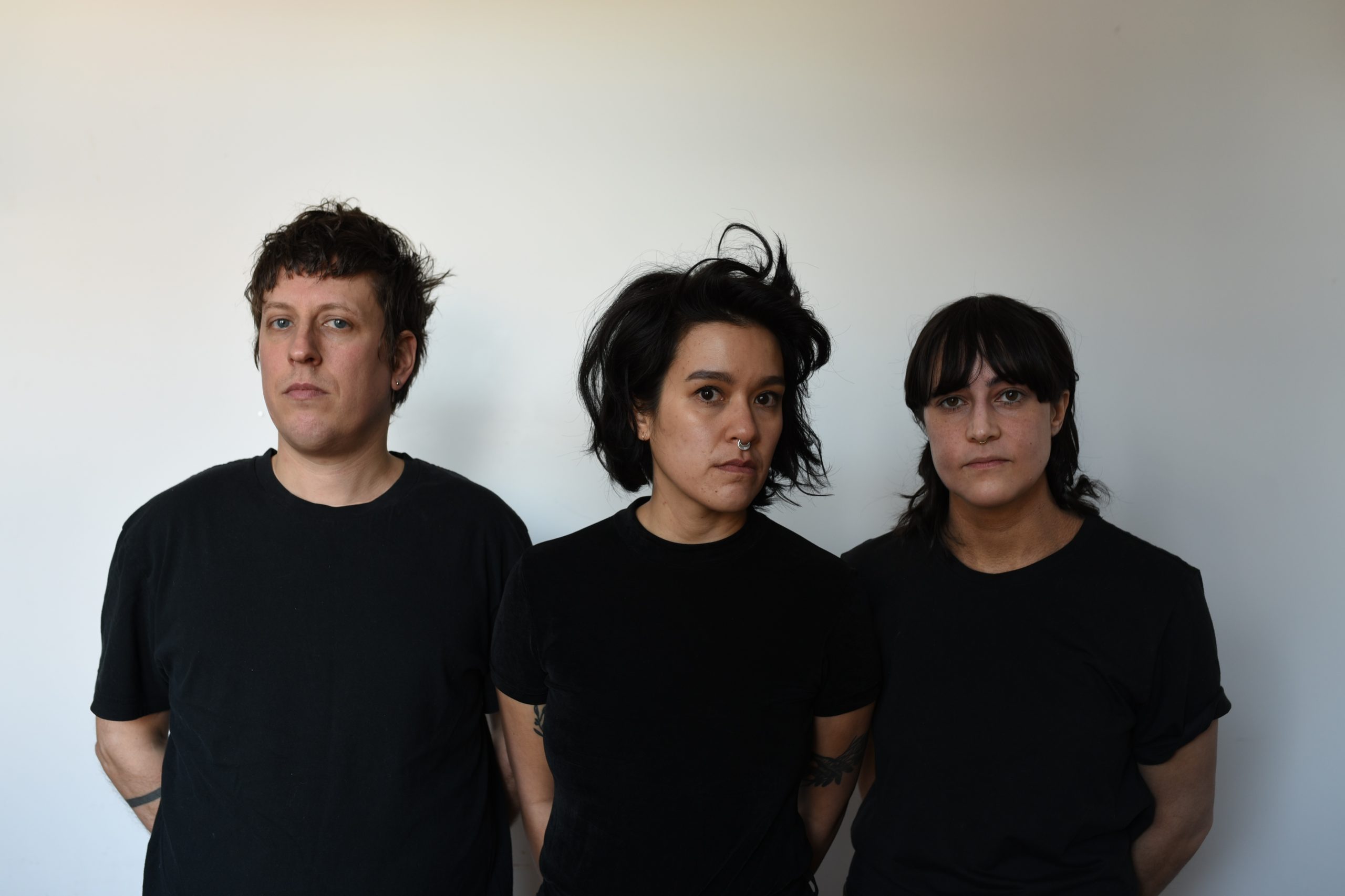 By David RodriguezApril 19, 2021 No Comments

Sonically dense while retaining a surprising amount of eloquence, BIG|BRAVE expound upon their irreplaceably huge post-metal sound with VITAL, a watershed moment in the genre.

Tl;dr: you need to be listening to BIG|BRAVE as they are one of the most salient and impressive bands in doomgaze/post-metal out there right now. Go listen and support.

I won’t lie – I usually find the notion of music with vocals/lyrics being interpreted as poetry a little corny. It’s a matter of taste of course, but I see the two as separate artforms. I say that only to say this: there is no other way to interpret BIG|BRAVE. For years, the Québec band, now officially(?) a trio, have excelled at performative, deep, and sustained fringe metal. Coming in with their 2019 album A Gaze Among Them, which I also reviewed, I found a band that wasn’t easily digested, but far from disposable, ignorable. Here’s a band that was doing something I hadn’t really heard before, beckoning forth and demanding more from me than I tend to give.

In my A Gaze Among Them review, I ended it with simply saying the band’s music ‘implor[es] you to understand a language you may not be familiar with, but is maximally rewarding when you do‘. In keeping with that, I see that with their new effort VITAL, the reward has become bountiful, because even with just a few full listens (so far), I feel as though I have reached an understanding of what BIG|BRAVE set out to achieve.

VITAL is, perhaps overly simplistically, an album about identity. Throughout, you’re faced with kernels of truth in existence brought forth by the stellar Robin Wattie, vocalist and bassist for the band. You also see the band play with facets of their own artistic existence, bucking any expectation you may have, but always in a direction to leave you in awe. One of the harder things for me to initially grasp about BIG|BRAVE those couple years ago was their slow, plodding, and purposeful take on post-metal and its doomish enchantments. Sure, I loved doom metal and appreciated a nice, slow, heavy song, but this was different. There weren’t crushing riffs or diabolical melodies abound – the weight all comes from repetition and sonics, which are fantastically buzzy and dense.

VITAL is more extreme in its deployment of these elements, meaning the dense parts feel even denser, and inversely, the negative spaces afforded in these songs feel more empty. The silence is less an absence of noise and more a noise that has yet to be heard, if that makes sense. Every second of “ABATING THE INCARNATION OF MATTER” is filled, even when no notes are played. Atmosphere is a practically a weapon for BIG|BRAVE, though one wielded in performance rather than combat. Every sound is powerfully palpable – guitars are laden in fuzz, amplified to give excess in volume and length without drowning out anything else. Drums truly crash down using rhythm as ritual here; repetitive and keeping beat as expected, but with a wholly human and organic energy. The vocals are afforded a few screaming moments at the end to punctuate the dark nature of the lyrics (‘dissolving each layer until there is little matter left‘) and feel so well-earned as a result.

Faced with a question of what stands out most, I’d still answer Wattie’s vocals. Not only are they clean and serene against the density of the instrumentation, but they carry a strength that even the instrumentation can’t manage: an internal perseverance; a spirit to the sound. And it’s here that I have to – must – mention “HALF BREED”, a song that will assuredly stay among my favorites of the year no matter what comes after. “HALF BREED” is the most upfront and least abstract of VITAL‘s songs when it comes to the theme of identity. The lyrics are all abbreviated and lightly altered from an excerpt of How to Write an Autobiographical Novel by Alexander Cree.

‘[The] pattern for the history of half-breeds hidden in every culture; historically we are allowed neither the privileges of the ruling class nor the community of those who are ruled. To each side that disowns us, we represent everything the other does not have. We survive only if we are valued, and we are valued only for strength, or beauty, sometimes for intelligence or cunning.‘

Wattie was consumed with these words upon reading them. Per a liner note of sorts, ‘I found in it such precisely monstrous truths that I never could quite so eloquently, so concisely articulate.’ Being mixed race like Wattie (though I personally hesitate to claim ‘half-breed’, as it refers to a more distinct combination of white European and Native, the latter of which I’m not [that I know of]), it’s a harsh truth found in life when we are not fully accepted by the cultures and communities that make up our wholes. We are seen as the ‘other’ first and foremost, disowned by both sides as Cree asserts, only fetishized or commodified in other ways that benefit the ruling class or race (this goes double for non-male genders).

For as light-skinned as I am, passing simply as white in many instances, I am revealed by my surname and some select features of my being, all of which have gotten me a fair amount of vitriol from time to time in the form of anything from slurs to ‘jokes’ to generally disapproving remarks, though all rooted in racism all the same. I, too, resonate with these words, as Wattie did, yet she delivers the words in such a way that it forges a deeper connection. Maybe it’s my bias in that I have a fundamental, lived understanding with what they’re saying, but all the same, the song proves to be profoundly powerful. Wattie’s voice practically croons to you at times, hammered in by pensive drums and thick, driving guitar strikes with reverberation.

“WITED, STILL AND ALL…” astonishes with a wider soundscape than found previously in VITAL with a more atmospheric opening assisted by stretched vocal harmonization and foreboding tones. I’m immediately reminded of Lingua Ignota‘s less harsh moments. Vibrations are keenly felt as sounds take a more tangible and impenetrable form, leaving little room for air or your own thoughts. Not to downplay its importance, but it is definitely the interlude-like checkpoint of the album, separating its elephantine two halves, and appreciated as such as much as it is its own song.

“OF THIS ILK” swings in with weight once again, wrestling the album’s theme by verbalizing the cutting and acerbic longing people of color often have to be white or at least whiter — an unspoken envy that can never be:

‘The one nerve they can’t see
The strength of the/pull of what it means to move with such ease
Through pillars so white, so clean.
I want to be you‘

As the song progresses, Wattie’s voice shakes with intensity, joined at key parts by a deeper voice seated in the back of the mix (I wonder if this is guitarist Mathieu Bell’s voice or someone else’s). It’s eerie and consuming, showing the dark side of this desire to change one’s self, all while the minimalist instrumentation doesn’t yield in the slightest, playing the same notes ad nauseum before a break in the middle. A respite of quiet gives way to a post-metal monstrosity, the biggest sound installation that VITAL has to offer with colossal cymbal work and huge guitars melding together in a controlled chaos, the likes of which I haven’t heard from the band until now, before it escapes and leaves us with emptiness again leading into the title track.

As the music warps in slowly yet greatly, the first words heard are ‘in any convincing way, you cannot erase the essence of a soul‘, and this just about sums up the being of BIG|BRAVE. Their music is, to me, a representation of determination, a point to survive against all adversity. It acknowledges monuments of oppression, interpersonal and systemic, and blows them down with fierce and unyielding sounds that no other band has been able to emulate for me since discovering this band. While that may not be as self-referential as intended, it still captures their spirit and shows their immense value to me as a fan and as someone that seeks out unconquerable music like this. If you feel similarly, you can’t afford to miss out on what’s being offered here.

The name VITAL points to many definitions, all having to do with something of essence, a matter of life-giving or sustaining means, corporeal or unseen. To that end, with this album, BIG|BRAVE have touched on so much, explicitly or implicitly, vital to our lives – identity, tenacity, acceptance, and love. Delivered in a way that pulses through you to the core, it’s impossible to see anything achieved here as less than poetic, emotionally cathartic, and significant to many who will hear it, because it lines its walls of sound with empathy and understanding, if you choose to hear it. Now I feel as though I speak BIG|BRAVE‘s language better after all this time, and VITAL is hopefully the Rosetta Stone by which they will reach many others in their time of need.