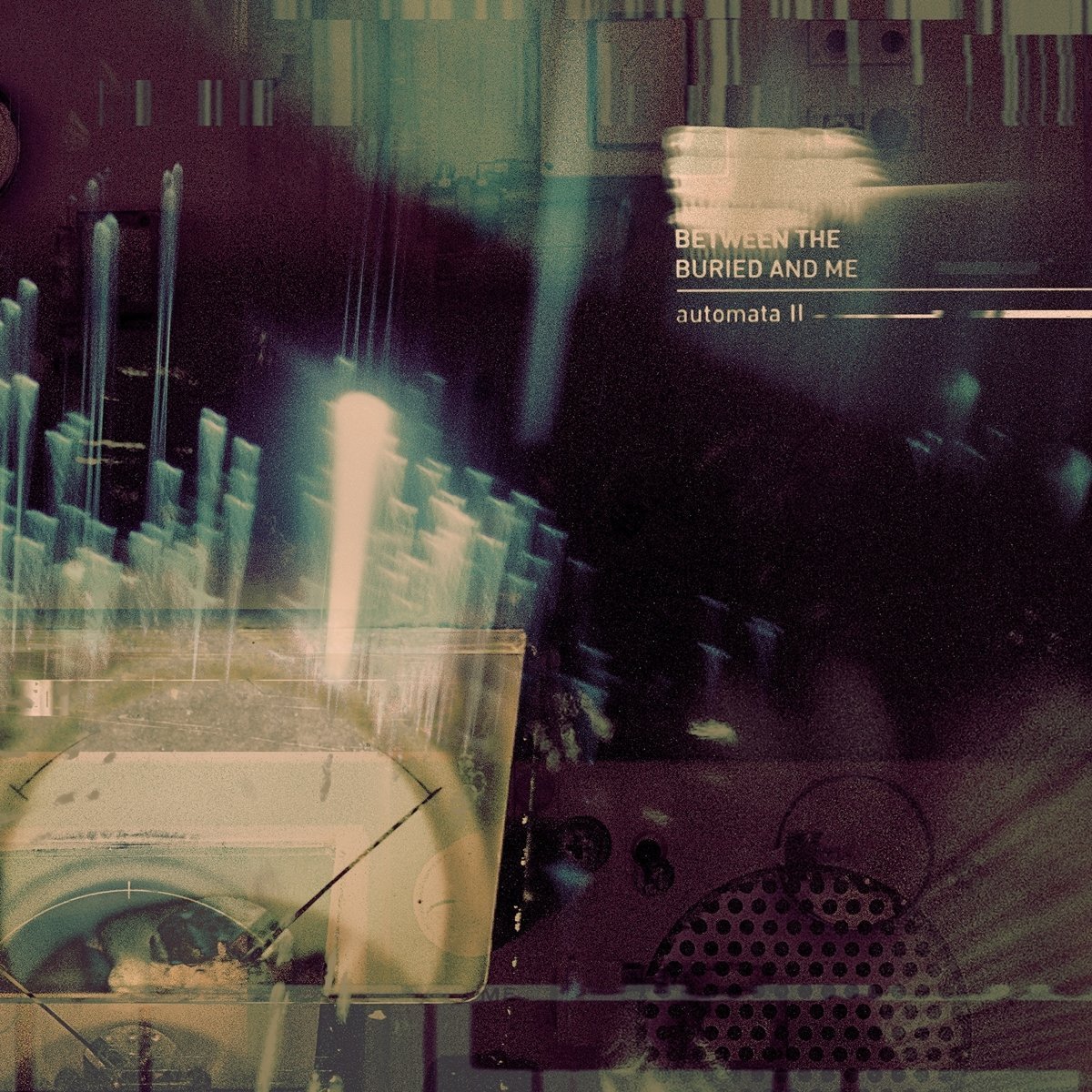 Between The Buried And Me – “Automata II”

Between The Buried And Me are back with the second part of their Automata double album, and it is again faced with mixed reactions, reaching from generous appreciation to straight disappointment.

After the release of Automata I back in March, Between The Buried And Me are back with Automata II, which completes the concept they’ve started on the first one. This time, two thirds of the old ‘Automata I-roundtable-review’ guard are back, namely our writer Pete and our PR guy Inter, and both are more than happy to be joined by fellow writer Jake! Let’s find out how BTBAM‘s concept worked out in the end!

If you would have told me at the start of the year that we’d have two brand new albums from Between The Buried And Me, you’d have found my reaction to be a mix of excitement and trepidation. While they are not the first band to do this sort of thing, BTBAM have generally released meatier records with a sprawling runtime. After Automata I released, I saw that there was some departure from this established formula, and in turn expected Automata II to continue this departure. It does.

“The Proverbial Bellow” is up first on the album, and it’s indelibly BTBAM. The riffs, additional instrumentation such as the banjo and piano, and the progressive transitions are what we’d expect from this band. Tommy’s vocals are again stretching into some new territory, and it’s a fantastic showcase for his talent. I also found melodies of this track to be instantly catchy and memorable. Across the thirteen minutes of the song, the sci-fi theme shines throughout, and my connection to the concept was renewed.

“Glide” and “Voice Of Trespass” work together here, with the former being more of a segue than a full track in its own right. I can see this being the most divisive on the album due to its quirky extravagance. There’s an accordion-led shanty section which leans into polka territory that takes up most of the two minutes that “Glide” sticks around. “Voice Of Trespass” goes big. Beginning with a Vaudeville-esque segment with scratchy clean vocals, twin acoustic guitar leads, and all of the energy of a broadway musical, this song is wild. For all of its zaniness, I really found this refreshing and unique. It was nice for me to see BTBAM have some real fun here.

Final song “The Grid” returns to the more traditional BTBAM sound and closes out the album with all of the transitions that you’d expect. There’s a certain triumph to the track’s final three minutes that is hopeful and uplifting both lyrically and sonically that serves well as a send-off. To my ears, this album doesn’t sound like the second half of Automata I as much as it sounds like a sequel to it. The range is greater, and the songs seem a bit brighter. I think this is a good album. While not the band’s best work, it’s nice to see that they still have some fresh ideas that suit their skills and a knack for creating some of heavy music’s most interesting compositions.

I wasn’t really interested in hearing Automata II after the solid, but overall lackluster Automata I. The lack of magic and the questionable decision to split something which was definitely meant to be a full album into two parts brought some bitterness into my experience, and I wasn’t able to get rid of that for Automata II. Unfortunately, the second part of BTBAM‘s eight studio album can’t compensate for my disappointment, despite some pretty compelling and intriguing moments.

“The Proverbial Bellow”, the first and longest track of Automata II, is a real double-edged sword. While I’m inclined to name it the best song on Automata, it also feels very fomulaic and ‘safe’. It features some nice clean vocal parts and a decent guitar solo (something which became rare on newer BTBAM outputs), but it’s also missing compositional flow. The parts feel very much duct-taped together, like tallying through a check list of BTBAM‘s reportoire. Furthermore, it’s an ironically great showcase of my main complaint for both Automata parts: the lack of real magic, awe, and greatness. This is a band with astonishing abilities and a profound artistic identity, but they lost any feel for excitement, any sense of impalpable greatness, and any intuition for august moments.

The other three songs on Automata II, well…while I kinda enjoyed ‘The Grid’, highlighting in particular the really beautiful and meditative part which starts around the middle of the song, the second and third track are unfortunately everything I don’t like about the band. Many people seem to fancy the ‘circus-esque’ elements of BTBAM, but those moments were always eye-rollers for me. Really can’t stand them. Tried, failed. Case closed.

I probably repeat myself here, but my conclusion tends to be very similar to what I thought about Automata I. Automata II is by no means a bad album, but it pretty much concludes a path of no return for me. For many years, I named Between The Buried And Me as one of my favorite bands, shaping my musical identity like only a few others did, and thankfully, no mediocre record can take that away from me. Ultimately, their progress brought them away from me, and their decisions surrounding these releases carry a certain bitterness. I hope others can find more enjoyment in these efforts.

Looking back at my review for Automata I from March, it is hard not to laugh at what a difference four months can make. I enjoyed part one and still do to an extent, but Automata II has quashed my hype in a fashion that is getting all too familiar with bands who excelled in the early 2010’s and have since fallen from grace in terms of quality and progression of sound.

To be blunt, this side of Automata is a boring rehash of everything that BTBAM have done in the last eight years of music. It’s more whacky, more spontaneous, but feels over the top and structureless compared to what has been and is being pushed out by similar artists. I had a glimmer of hope that, despite not liking “Blot”, it could be the “Sun Of Nothing” that leads into a “Ants Of The Sky”. Alas, I was left sorely disappointed with “The Proverbial Bellow”. The song is 13 minutes of Between The Buried And Me rolling through too many styles, to the point where it feels disjointed. The lead guitars are uninspired, whilst the synths and, quite frankly, lame effects bury any hint of decent metal. The last straw was the crappy Slash riff at the end of the song, poorly constructed and lifeless.

Now I really didn’t like the next song. Really didn’t like it. Over the past ten years, I’ve begun to hate certain instruments, much in the same way I hate disgusting vegetables like mangetout, asparagus, and avocado. Bagpipes come close, but the worst are accordions. BTBAM have used them successfully in the past in subtle and calculated measures. Yet in “Glide” (probably their worst track ever), they tried to use it as their main instrument. It is almost like they wanted to match or replicate bands who have stolen their thunder in the ‘whacky progressive metal’ game lately, like Native Construct or Others By No One, but failed more epically than anyone could ever have imagined. “Glide” is pure trash, sounding more like something a nerd would make in his bedroom rather than a world-famous prog metal band. As I close off this paragraph, it is being deleted from my device and my ears forever, and good riddance!

Does it get better from here? I bloody wish. Someone got a hold of Cyborg Octopus’ hilarious “Disco Brain” and thought they could stretch it into an eight-minute song. Hold onto your hats for four minutes of mindless big band prog metal, worse than anything from Coma Ecliptic, with basic-as-fuck swing music tying it together. Tacky is the best word I have for it.

The last track is barely memorable either; uninspired vocals, a bassist who is drowned out by a swamp of overpowering low end, and a song structure that seems way too familiar and overplayed after a full run of Automata. “The Grid” is not a track I’ve cared listening to frequently, and by the end you feel like calling it “The Grind” instead. I expected much better than this from Between The Buried And Me. Thank god I’m done with this review; time to act like the old man I am and bemoan the shitshow this album is, wishing they’d managed to top The Great Misdirect or Colours.