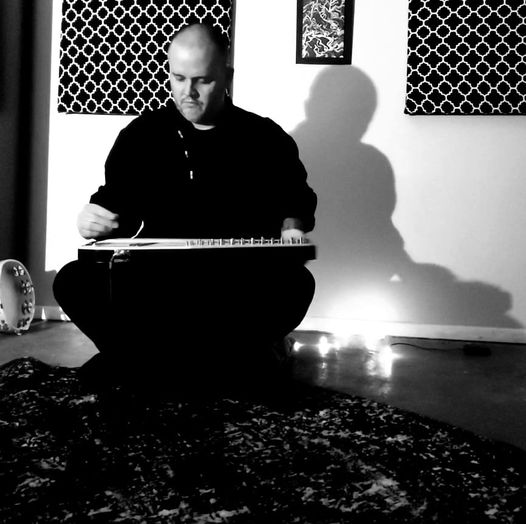 By Landon TurlockSeptember 13, 2022 No Comments

Aura Gaze‘s Great Moon Essence is undoubtedly a good example of how to create a rewarding experience for listeners of ambient music.

I’ve been listening to and writing a lot of ambient music since the beginning of the pandemic. However, I’ve never challenged myself to review an album in this genre. I say ‘challenged’, because my approach to ambient music is usually experienced in relation to another activity – maybe it’s working, studying, meditating, or trying to fall asleep. And while a review is never going to be objective, that subjective experience, at least to me, is particularly apparent in examining a record like the subject of today’s review – Great Moon Essence by Aura Gaze.

For the uninitiated, Aura Gaze is a Texas-based solo project created by Brandon Blair. Blair describes this project as combining his interests in Eastern philosophies and hypnotic sound engineering. Such an approach is apparent even without this background, as the drones, sitar-esque melodies, and chimes of “Everlasting Peace” evoke such an atmosphere. While I can’t speak to Blair’s background, such sounds, their context, and the album artwork lead me to reflect on how appropriation can occur in ambient music even if these choices are intended to be appreciative. I cannot speak authoritatively on this subject, and am not making any conclusions about the work of Aura Gaze here. However, this topic is an important one to reflect upon in a genre of music often tied to Eastern philosophies, traditions, and music.

I have to commend Blair’s ability to intermesh melodic and ambient tones on the record. As a fellow ambient composer, I often rely more on melody than atmospherics in my compositions, partially because I worry about a listener becoming disengaged. As a result, my approach may be a little less restful and more demanding of the listener. However, Blair clearly understands pacing and balance in his compositions. The evolving, droning nature of synth pads complements the minimalist but thoughtful melodic instruments and field recordings for a meditative yet engaging listen. On “Incense Shrine”, some of those instruments sound like tremolo-picked guitars, which I also appreciate. This mixture of textures and tonalities makes for a varied listen that maintains a restful atmosphere throughout the album. In this way, Aura Gaze allows the listener to engage as much or as little as they like with the details of the soundscape while still having an enjoyable experience.

In an interesting deviation, however, “Woodland Hills” pulls in slightly darker and more abrasive textures that I may describe as metallic and percussive. It’s an unexpected choice but still contributes to the ethos of creating an engaging yet meditative piece of work, Great Moon Essence.

Great Moon Essence is an example of a well-constructed, thoughtful, and diverse ambient record. While I have some reflections about some of the instrumentation used in this context (as described above), Blair’s work as Aura Gaze is inspiring as a fellow ambient composer. The album may not win more fans to the genre of ambient music, but it is undoubtedly a good example of how to create a rewarding experience for listeners of this type of music.