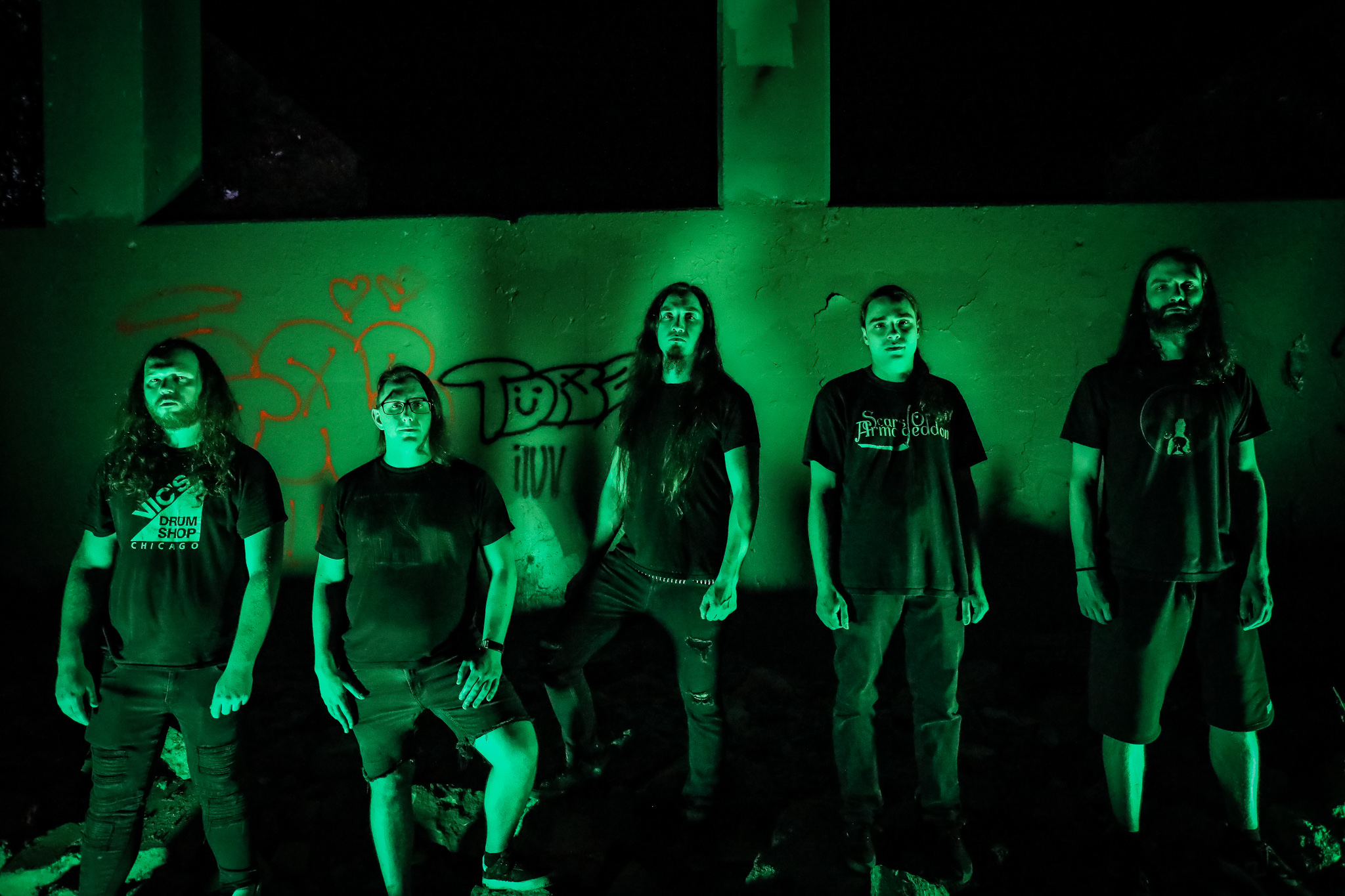 By David RodriguezJanuary 26, 2022 No Comments

I don’t these too often, so when I do I try to make them count. Setting me up with a whole-ass album of melodeath – a genre I love, but don’t explore too often recently – was a great way to spend my first premiere of 2022. We don’t mess around with these, so let’s blow the dust off and talk about Burned In Effigy, a scrappy quintet from Chicago, IL.

This has been a long time coming, but the band’s debut record is more than just that – it’s also a marked change from their EP days in 2017 and prior when their music was instrumental. Same neo-classical, melodic death metal feel; no vocals. Enter vocalist Mark ‘Smedy’ Smedbron in late 2019 to bring a new layer of sound to the band and we ultimately get Rex Mortem (Latin for ‘death of the king’), the band’s first full-length which we’re just dying to premiere here for you ahead of its official independent release date this Friday, January 28.

Vocals existing aren’t the only thing to change either. The band’s first, and so far only, EP Terrestrial featured charmingly dirtier production – one worthy of the labels independent and DIY; one that some people understandably prefer. Rex Mortem has what I will generously assume is more of a budget behind it, something that I’m sure influenced a much more pro and clean production style. Instruments are crisp without betraying Burned In Effigy‘s darker sound and makes those melodies so damn catchy to the ear. It’s economical too! At a bit under a half-hour, it has no excess or wasted space, leaving nothing but lacerating riffs, speedy grooves, and visceral vocals to indulge in.

As someone that grew up with the likes of Gothenburg legends At The Gates and Character-era Dark Tranquillity being among the first extreme, fringe metal bands I got into, I found tracks like “Artorias”, “Nightfall”, and “Hades” comforting. Though not a by-the-book concept album, Rex Mortem delves into some history and myth alike with tales of larger-than-life figures. Villains and kings – often one and the same – reign in blood in Burned In Effigy‘s world, but are also toppled as the ones before them were, and ones after surely will as well, by death and betrayal.

The final track, “Vendetta”, is aptly placed as if to sever the tyrannical ties that bind much of the album for a clean end, though I’m sure this is just the beginning for the Windy City metallers. The musicianship on display here is just plain fun, very astute, and studied. More importantly though, you can tell the members are fans of this style of music. A good musician is capable of emulating any style they set their mind to, but to resonate heavily with fans, they must also indulge in the same stew they wish to brew and it’s clear as day that’s what you get with Rex Mortem. By fans, for fans. If you have even a soft spot for this style of music, it’s hard to imagine you wouldn’t feel right at home in this album’s capable, infectious embrace. Hell, I’ve heard it several times in preparation of this article and I’m still gonna jam it on Friday!

We want to thank Burned In Effigy and their team for allowing us the opportunity and pleasure to premiere this prime album. If you liked what you heard, be sure to peep the album on the band’s Bandcamp. There’s never a bad time to support independent artists, but now more than ever it’s important as the pandemic continues to eat up tour plans and other important revenue streams. And hey, there’s a Bandcamp Friday coming up real soon, so do a spinning lariat on that piggy bank and throw eight (8) United States Dollars directly at them if you can – that’s just a dollar a song! You can also follow the band on Facebook and Instagram.