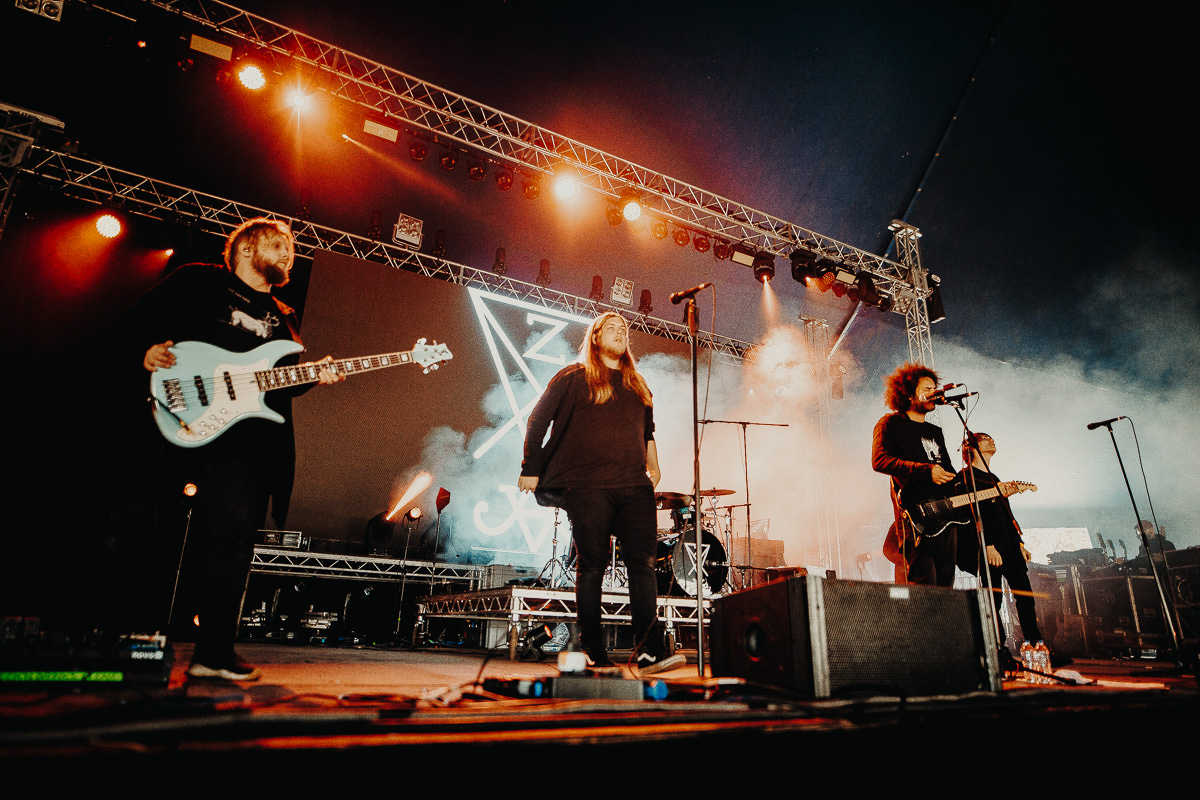 Everything Is Festivals: ArcTanGent Analysis – Part 1

By Pete OverellSeptember 12, 2019 No Comments

It hardly seems real that two weeks ago I was languishing on my sofa, hardly able to move after yet another exceptional, albeit wet and soggy edition of ArcTanGent. Europe’s premier experimental rock festival returned for its seventh year, and Everything Is Noise was delighted to have attended yet another unbelievable festival experience at Fernhill Farm. We previewed a host of amazing bands just before the festival, and considering the ridiculous weather conditions, we were happy to have made it to twenty-six bands over the three-day festival! We’re going to give you the low down on each and every band over our two-part feature, so stay tuned for the next part coming soon!

Fernhill Farm has been a great venue for the last three years I’ve been attending ArcTanGent, with an abundance of space for pitching your tent, and a stage set-up to die for. This year, accounting for the festival’s rising popularity, the organisers added two extra camp sites, which certainly helped those arriving late on Thursday and on Friday. Usually we rock up later on the Thursday and can easily pitch close to the entrance, but this year was slightly different thanks to the site opening early. Punters were allowed to start putting up tents on Wednesday evening, so the usual spots were taken by the time we got there at 10am on Thursday. Alas, we just moved further back, picked a nice downhill pitch, and made our way into the main arena.

Moving past the familiar sights of portaloos, taps, and trash areas that makes up a simple (and showerless) campsite, you make your way to the arena through a simple and effective wristband checking gate. They had upgraded the site from previous years, adding in a further route to get from main stage to the second stage (Yohkai) more easily, using metal gantrys to prevent sludge from forming underfoot. This proved a major lifeline in the battle against the elements to come, especially when dashing to get to a band you simply could not miss a second of. There were more food trucks than ever, and the merch tent got a major upgrade too, putting it front and centre next to mainstage, with punters encouraged to saunter through it on their way to shows.

All stages are under whopping tents, one of the best features of the festival. The second stage – Yokhai – was shrunk down, which felt like a shame to begin with, yet actually played out well in the end, with the other stages having been expanded in kind. Because of the high quality of artists filling the later slots across the arena, I was never trapped outside the tents, making sure I heard the bands in their prime each time. The sound on each stage was (as per usual) absolutely exceptional. It’s always loud, like melt-your-fucking-face loud, but earbuds or distance from the main speakers softens the blow.

The food was exceptional as usual, with the Paella and Bunny Chow stands getting a thorough seeing-to over the weekend. Helping wash the great food down was a fine selection of beer, with bars aplenty over the site. It was also nice that the press area was much closer this year; the walk in previous years was arduous when you were leaving or trying to get to the next band. Speaking of…

Ithaca opened the festival for us, and we were not let down at all. The tent was brimming considering how early in the day it was (relatively speaking), and the band turned out for the show. Powerful lyrics from the lead singer were matched with ripping, techy guitars and thundering drums. Definitely worth catching this new band live!

I knew these guys epitomised stoner metal, yet I didn’t quite expect how stoney they would be. The thick guitars and the soft yet haunting voice of the band’s lead singer seemed to put a spell on the audience. Alas, it didn’t draw me in just as much as expected.

My time with Bossk was short, yet sweet. Due to press obligations, I had to bail after 15 minutes, but I saw the band going through a solid opening few songs. Playing on the mainstage, the post-metal titans cranked out spacey riffs, with excellent visuals played on the screen behind them. My comrades told me the set only got better after I left, the band gripping the crowd in a trippy black hole for the entire duration.

Around the time of Nordic Giants set, we realised the clashfinder we were using was fucked, with bands starting 10-15 minutes earlier than it stated. We made it over a few songs into the set, and thus got a pretty poor position, which unfortunately is very audio-visually focused. I picked Nordic Giants over Conjurer, having seen the latter three times over the last year, and the former over two years ago. This turned out to be a poor decision. Nordic Giants were okay, but they didn’t play any new content as far as I know, and due to only having two members and relying on loud samples, their sound wasn’t very organic.

The problem with such an intensely packed line-up is that you have to make tough choices, especially when press calls. Because of my clashfinder fail, my great plan to avoid missing MØL was scuppered, yet not before I got two solid songs in. I was blown away by their passion and energy, with their sound acting as the cherry on the top. The atmospheric black metal mixed with gaze elements worked perfectly on the third stage, and it was a real shame I had to depart. I am, however, very much looking forward to seeing them on tour with Rivers of Nihil in October. If you missed them, they play throughout Europe on one of the best tours of the year.

Zeal & Ardor brought down the house at last year’s ArcTanGent, earning them a spot on the mainstage. They were amazing once again, sounding much more refined, and boasting a better stage prescence. The only advantage they had last year was that they played in the dark then, and as such had a much more fitting aura about them that complimented their music and live show more. Needless to say, the crowd still loved it, with chants erupting throughout the set. Make sure to see these guys as soon as possible!

I last caught Carpenter Brut in London in 2018. It was a good set, with Brut and band rattling through a lot of his great material, and the room bristling for the tunes. However, at ArcTanGent, by the third track in I was bored stiff. Barely anybody moved to the music, and Brut began to plough through his not so great new album Leather Teeth, which just sounds too cheesy. I’d chosen him because my friends fancied it, so I beelined to Pijn.

Upon nearing the tent for Pijn, I regretted every second spent at Carpenter Brut. Finding compadres in the crowd, I settled in for a wild ride. The band were playing with three string players (one making her live debut with the band), and that made all the difference to their music. The guitars and drums in Pijn‘s music are amazing on their own, but the hauting atmosphere the strings lend to their sound is something entirely else. It helps spin you out when the tempo is down, and adds to the brutality when the distortion kicks back in. Great stage presence and an incredible set. Looking forward to December when they play their album Loss in full at the Black Heart in London.

Unpopular opinion incoming: I couldn’t get into Daughters‘ latest album, so I was apprehensive to see them. We got a great spot, having only to walk about 20m to get there from Pijn. They turned out to be fucking fantastic live, with a stage presence most bands would kill for. Their intense mathcore/punk drove the crowd wild, with endless crowd surfers high fiving the band, who were usually heading the other direction on the crowd’s shoulders. The dark tent created an oppressive and weird atmosphere, mesmerising in the way the band just continued to exude energy. It felt like a fitting end to the night, with Coheed and Cambria really not my jam.

Now, I was really hoping to report back on the awesome three hour silent disco line-up. However, you know when plans just don’t come together? One of those nights. Two sets of friends fell asleep before we made it back to the arena, and whilst the drum kits being smashed sounded like a great laugh, it was a no-go. Knowing the weather was going to turn for the worst, I went back and secured the campsite. Keep an eye out for part two of the review coming shortly.

If you’re already convinced to show up next year, find social media and ticket links below!