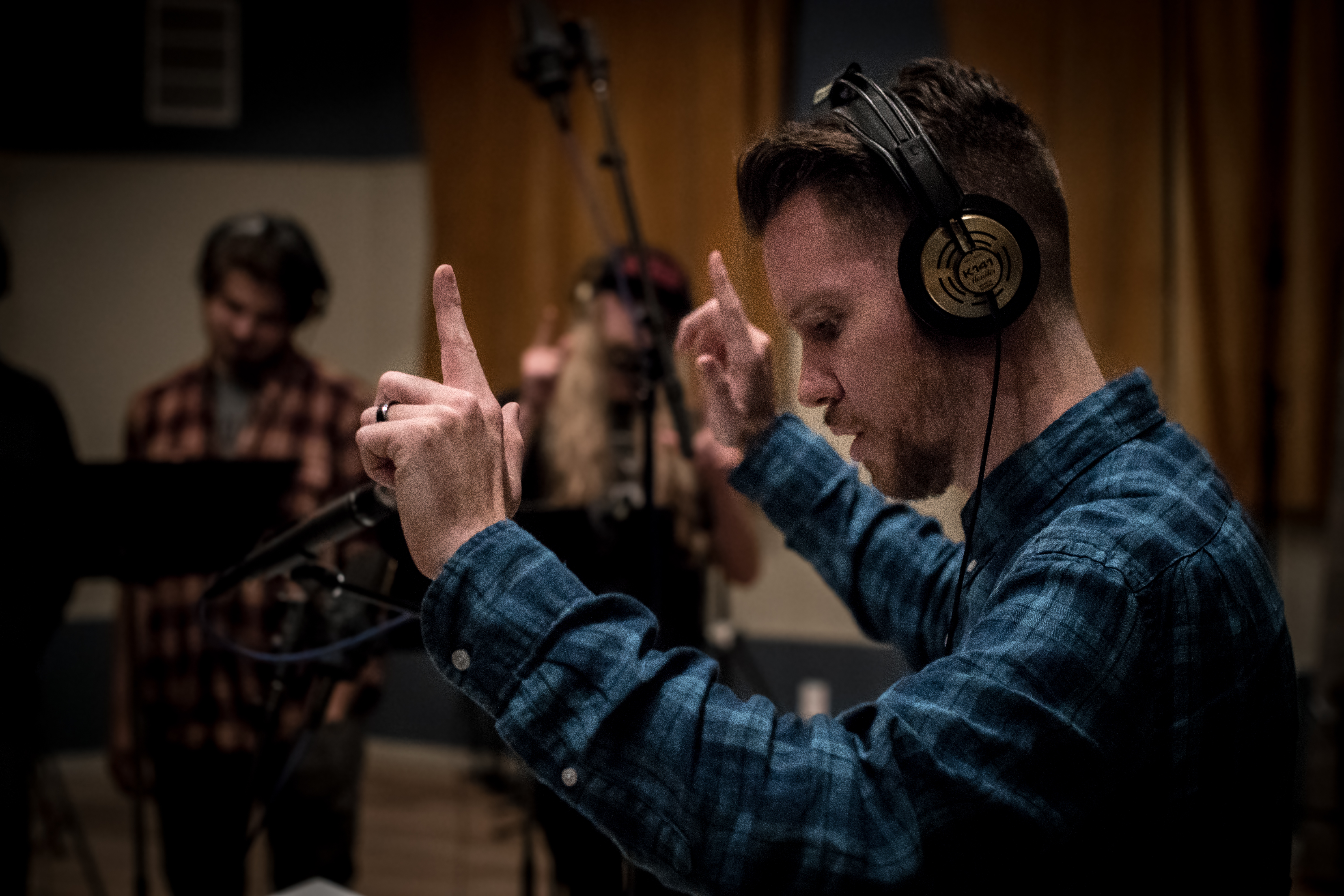 Behind the TesseracT ‘Sonder’ Choir Recording Session with Randy Slaugh

Randy Slaugh’s work precedes his reputation – even if you haven’t heard his name before, you’ve heard his arrangements and production on music by artists like Periphery, Thy Art Is Murder, and Devin Townsend Project, among many others. He is also a member of the art pop group White Moth Black Butterfly, whose members include TesseracT‘s Dan Tompkins and Skyharbor‘s Keshav Dhar, as well as vocalist Jordan Bethany and percussionist Mac Christensen. Recently, Randy worked on the choir parts that you can hear on TesseracT‘s most recent release, Sonder. The recording process was filmed by Tyler Lemmon, and Randy edited the footage into a behind-the-scenes video that we are proud to premiere here on Everything Is Noise. You can watch it below:

Randy was also kind enough to take some time to answer our questions on the path that he took to carve his unique niche in progressive and metal music, and where that path might take him in the future.

Everything Is Noise: You’ve worked with a number of high-profile progressive and metal artists. How did you first get into the work you do now?

Randy Slaugh: It actually started with consistently being in the right place at the right time, seeing opportunities and just going for it. I first connected with the guys in Periphery during some of their first couple tours. I saw Misha had posted a demo of “Have a Blast” that had a MIDI violin in the intro, and I just hit him up, offering that if they were interested, I could track the intro with real strings. At that time, I had very little experience with string arranging, but I saw an opportunity, and when Misha said they were interested and sent me the parts, I found a killer violinist, tracked the parts at a local studio and got my first album credit. It just went from there, connecting with Misery Signals, then with I Killed the Prom Queen, Devin Townsend, Architects, Intervals, Skyharbor, etc. and before long, I realized there was a niche I was starting to carve and a lot of opportunity to connect with bands and artists I really respected and wanted to collaborate with.

EIN: Was there a specific vision you had for the parts you arranged on Sonder? What influences, if any, were channeled in these parts?

RS: Dan had the vision of achieving sort of a layered pop production vocal sound like you hear with bands like 30 Seconds to Mars. It was kind of an experiment applying this to TesseracT’s more progressive sound, and a lot of the parts ended up being pretty low in the mix, but overall, I think it added a cool aspect to the album’s production and sound.

EIN: How do you generally approach arranging for other artists? How has that approach changed over time?

RS: It’s honestly been case-by-case. For example, for Periphery III, Misha composed all the orchestral parts in MIDI, and I was in charge of arranging and transcribing those parts for an 8-piece ensemble and tracking everything with session musicians. On the contrary, for Thy Art is Murder’s Dear Desolation, Will Putney sent me rough mixes of the tracks with no orchestration, and I had complete creative freedom to write all the arrangements myself. Since we were doing everything with virtual libraries for that record, I could go to town with all kinds of strings, brass, percussion, choirs, piano and tons of layers, which was a lot of fun.

EIN: As an arranger with original ideas, is there ever a challenge aligning your vision for a project with an artist’s vision?

RS: For the most part, it’s actually been pretty smooth. For artists like Devin Townsend, I was already very familiar with his work going into the two records we did, so I already had a sense for his taste in production, his textural choices, chord shapes he’s a fan of, etc.  However, on some records, it’s been a challenge when the artist wants to branch out into new territory. For the new Silent Planet record, we wanted to try some synth production and sound design like you hear in Bring Me the Horizon’s newer work, so there was a lot of trial and error to see what could work and how far we could push things while still dialing it back and keeping it consistent with the sound they’re known for. Those kind of challenges are always super rewarding and I’m really proud of how that record turned out.

EIN: Like in the case of TesseracT, It seems like you often collaborate remotely with musicians worldwide. How do you make sure that your vision aligns with the artists you collaborate with when communication isn’t instantaneous?

RS: There’s a lot of email communication, a lot of Skype calls, a lot of taking notes, sending ideas back and forth, getting the client’s notes and overall making sure we’re 100% on the same page before we start tracking. There are some projects like Silent Planet, Misery Signals, and even some of Devin Townsend’s Z2 where we got to work together in the studio, but for the most part, a lot of what I do ends up being long distance.

EIN: What comes next for you? What are some projects that you’re excited about or goals you are working towards?

RS: We’ve got some new White Moth Black Butterfly stuff coming soon – some new music plus a documentary on how the project formed and functions with all of us being based all over the world. I also did some work with Unearth, and I’m currently closing the deal with another band I’m really stoked about. As far as long term goals, I’ve been composing a lot of TV placement music this year and working towards building up some passive income. A lot of cool things in the works!

Check out Randy’s website here, and follow him out on Facebook and Instagram. Listen to TesseracT‘s Sonder here. The featured image for this article was taken by Jonathan Ramanujam (check out his site here). The clip was filmed by Tyler Lemmon and edited by Randy. Color grading and sound mixing was done by Austin Bentley.