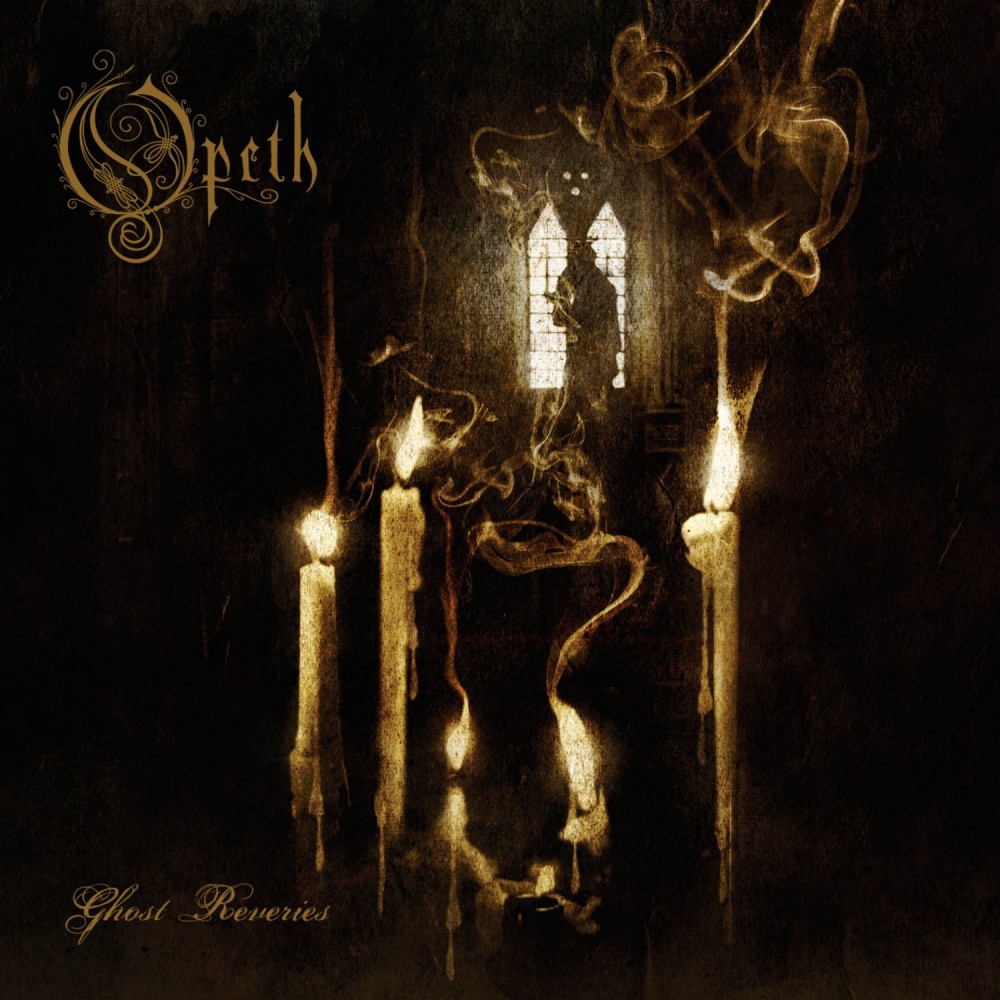 By Dominik BöhmerDecember 8, 2018 No Comments

Swedish progressive death metal behemoth Opeth have a rich and varied history behind them at this point – many of their records could rightfully be considered their crowning acvhievement, for reasons unique to every album and to every listener that engages with the band’s music. And yet, finding one out of their twelve full-lengths we all agree upon for inclusion in the A Scene In Retrospect feature proved to be surprisingly easy a task. Apparently, their eighth album Ghost Reveries holds a special place in the hearts of our team and the Opeth fanbase alike; you can find what our Editor-in-Chief Landon and staff writers Jud, John, and Robert have to say about it. Enjoy!

So I may be stretching it, but 2005 became a better year for music overall when Ghost Reveries came around. It probably became an instant classic the second it hit the shelves, being easily one of the best albums of the ’00s. I was personally astounded by Ghost Reveries, from the opening sequence to the closing track. It may have been the fact that I was still in the early phases of my explorations of extreme music when I came across it. However, even after nearly nine/ten years of replaying it, it’s just as good – if not better. Ghost Reveries is a rare occurrence if you ask me; very few records manage to have virtually no faults.

The record’s structure is amazing (given the time it came out). This hard/soft alternation became Opeth‘s hallmark approach, and is now something many other bands are using. Seamlessly juggling death metal and progressive rock with such grace is an unbelievable feat. The production value is, simply put, pristine. Likewise, the songwriting is spectacular; there are no moments where I’d wish anything else was happening. The dynamics and the way the musical narrative unfolds is not only original and engaging, but manages to go from bleak darkness to an emotional tenderness like nothing else.

What elevates all the aforementioned strengths to soaring heights is the performance aspect. While everyone is demonstrating great prowess and finesse, the shining star of Ghost Reveries is frontman Mikael Åkerfeldt. Even to this day, I’m baffled by the man’s vocal delivery. His clean singing voice is soothing, even ethereal at times. His growls are second to none. I mean, across the extreme musical spectrum, there are very few who come close but don’t quite reach such a level of demonic rendition.

Considering the current musical course of the band, I have strong doubts we’ll ever get anything near this or Watershed ever again. An unfortunate fact (in my opinion), which definitely raises the value of these records – maybe even more so for Ghost Reveries than Watershed. Ghost Reveries is a special landmark which I recommend to any and all music lovers.

You know you’re in for a journey when an album has only eight tracks and lasts one hour and seven minutes. I’ll have to admit that when I was younger and a new fan of progressive and death metal, I initially found the record hard to digest, despite its impressive share of stunning moments. However, one of the album’s most grandiose tracks, “Reverie/Harlequin Forest”, became an instant favourite.

When Opeth balance death metal, Celtic-inspired folk, and 70s prog, they are almost unbeatable, and one of their most exemplary achievements of this balance is the aforementioned track. Upon first listen, the chiming instrumentation and harmonies around the passage of ‘Nocturnally helpless/And weak in the light/Depending on a prayer/Pacing deserted roads to find/A seed of hope’ were so stunningly beautiful to me that it challenged any preconceptions that heavy and progressive metal could not also be emotive and intimate. This same subtle and soulful approach carries into “Hours of Wealth” and “Isolation Years”.

In contrast, songs like “The Baying of Hounds” and “The Grand Conjuration” are dark and menacing, but still retain nuances foregone by many of Opeth’s contemporaries. The repeating hook in the latter track grounds the song and its haunting message, inverting the use of catchiness into an instrument of discomfort.

By incorporating so many elements into such a cohesive yet multi-faceted whole, Ghost Reveries justifies its length and achieves its ambitions. Although some of the album’s satanic themes have not aged particularly well over the thirteen years since its release, it is still a benchmark for modern progressive death metal that continues to show just how much potential the genre has for exploration and expansion.

I love how music can bring you back to a certain moment. I bought Ghost Reveries by Opeth when it came out in August 2005, but didn’t listen to it for a few days until I went on a road trip. As I ripped through the swamps of Central Florida on a five hour trek, I popped Ghost Reveries into the CD player.

There was no way of knowing it at the time, but this was Opeth‘s Halley’s Comet. The line-up on this album is arguably their strongest of their career. It was new member Per Wiberg’s first album on the keys (a keyboard player was practically forced upon Opeth after Steven Wilson‘s additional keys, piano, and mellotron on Blackwater Park, Deliverance, and Damnation). Also, Ghost Reveries would be longtime guitarist Peter Lindgren and drummer Martin Lopez’s final album with the band. Coming off of their last album Damnation, which was completely clean and growl free, the first few notes of the opener “Ghost of Perdition” led the listener to believe they will be experiencing another ballad.

Silly listener, because right from that, Opeth went all in with growls, double bass, and heavy guitar chugging! I knew that this drive through Florida was going to be one to remember about a minute in. From there came “The Baying of the Hounds” and “Beneath the Mire” which are both absolute perfection. A flawless blend of savagery and beauty that we have come to expect from Opeth. Newcomer Wiberg shines with many organs and mellotrons, adding a whole new layer over the guitars and rhythm section.

During my drive when the middle part of “The Grand Conjuration” came on I remember slam dancing in my truck to the point where my knuckles were scraped up from punching the roof from my thrashing. The two ballads “Hours of Wealth” and “Isolation Years” are to this day some of Opeth‘s most gorgeous songs. Most fans of the band consider Ghost Reveries to be their best album, and it’s really hard to argue against that. It’s also special to me because it always brings me back to a great trip through beautiful Florida.

There are surely few bands that can rival Opeth, in terms of dissent amongst fans. Heritage is something of a battle line, over which self-appointed ‘true fans’ lob ire at their favorite band’s softer, ‘sell-out’ phase, while some (myself included) are fond of just about everything the band made after Steven Wilson got involved. There are, however, a few seemingly universal points of agreement. Ghost Reveries is just such a point, a near-universally (and rightly) lauded work that is, in my mind, the quintessential Opeth album.

Even if Ghost Reveries were only its bookends, it would be an all-timer: “Ghost of Perdition” is downright dizzying, like being dragged through the woods by a stooped old wizard whose intentions you can’t quite suss out. Meanwhile, “The Baying of the Hounds” foregrounds the band’s new full-time keyboardist, and in so doing foreshadows the full-on turn into prog the band would take in just a few years’ time. At the end of the record, “The Grand Conjuration” plays with repetition and dynamics, donning a structure that harkens back to the title track off Deliverance, and “Isolation Years” brings things to a thoughtful, delicate conclusion.

If there’s one thing about Ghost Reveries that doesn’t inspire quite as fulsome praise from me, it’s the middle of the album. It’s far from bad – I would still take songs like “Reverie/Harlequin Forest” over the very best of any other band’s work. But those middle bits can’t quite match up to the impossible standard set by the opening and closing song pairs. But, of course, it’s absurd to ding a band for making an album that’s only half masterpiece, whereas the other half is merely good. The fact remains that the full package of Ghost Reveries is transportive, and a musical journey everyone ought to take at least once.

That’s it for another episode of A Scene In Retrospect! It’s always a pleasure to delve into records that shaped our musical journeys, and I hope that you feel the same way reading these articles. What are your thoughts on this band and album? Are there any you would like to suggest for this feature? Leave it all in the comments!

We have one more classic album review in sore for y’all this year, so make sure to tune back in fourteen days from now to not miss out on that – I’m convinced that you’ll like it! See you in two weeks; until then, stay safe, and as always…