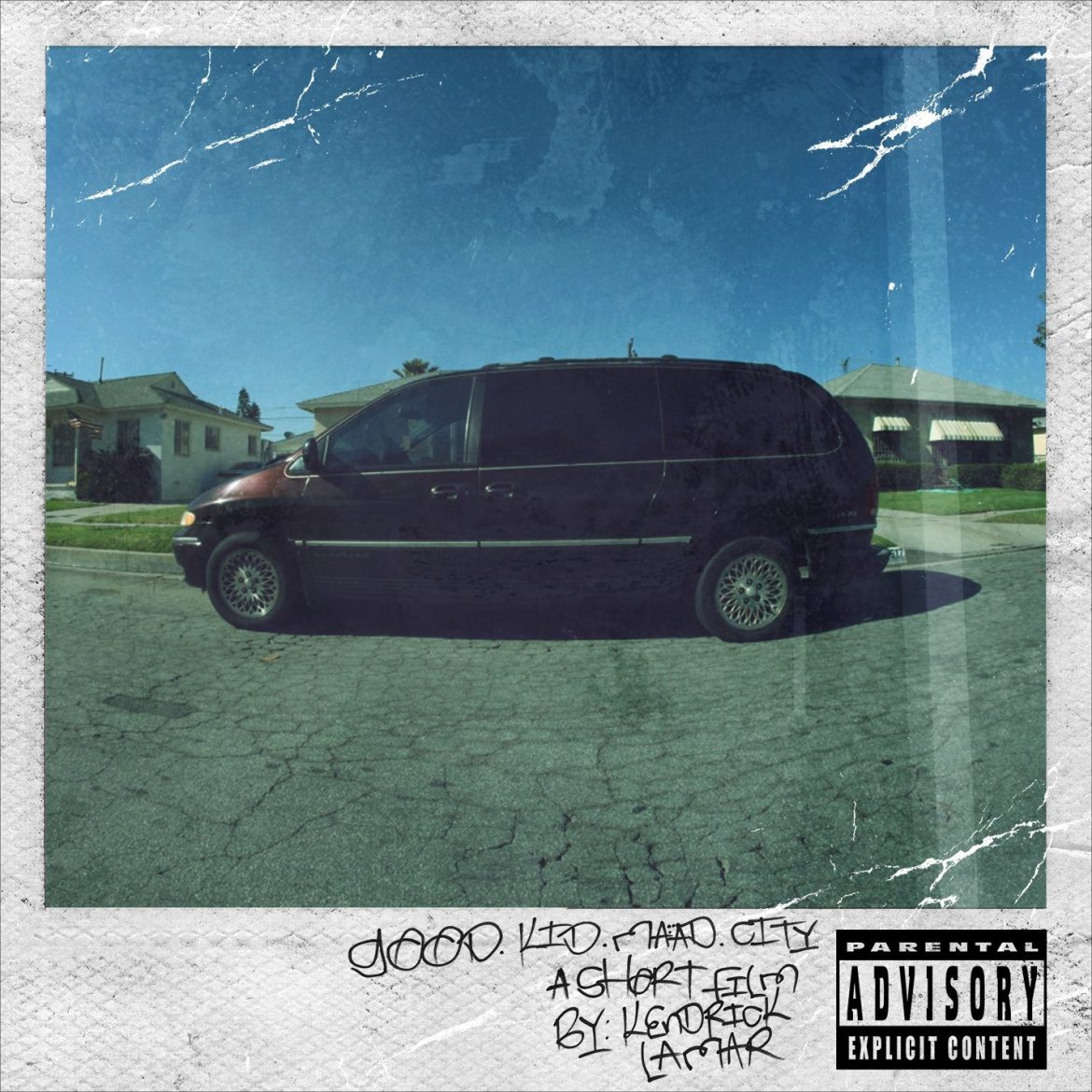 This is a world premiere! For the very first time in A Scene In Retrospect history, we’re discussing a hip hop record. What better way to open up this feature to a whole new genre than by looking back on one of the undisputable contemporary greats? That’s why we chose to cover Kendrick Lamar‘s major label début good kid, m.A.A.d. city on today’s episode. In the following, you will find the thoughts of EIN editors Jake and David, as well as staff writers Billie and Sam on this seminal modern classic. Please enjoy!

After a successful debut with Section.80, KDot was standing on both promising, and also tenuous ground. Not quite a certified legend in the game, but on his way to proving it. This is the moment where a lot of rappers tend to make it or break it. Kenny here wasn’t going to let the latter be an option.

Boasting Dr. Dre production, an MC Eiht feature, and an album cover that alludes heavily to Crip gang affiliation, this album was certainly going to appeal to a certain kind of rap audience. Of course, Lamar subverts expectations throughout. As we’d heard on the album’s predecessor, Kendrick’s interest in r’n’b is showcased massively, helping a wider audience embrace his music, and also giving his existing fans an introduction to styles they may be less familiar with.

The album is directly reminiscent of the coming-of-age story told in John Singleton’s 1991 classic, Boyz N The Hood, and tells an almost identical story. Unlike gangster rap of the past, including that made by Dr. Dre himself (after the sequins and leotards), Lamar is not actively boasting about gang violence or organised crime. In fact, the overarching theme of GKMC is KDot documenting the events that turned him off that lifestyle.

A few of the greats tried to do the same; examples include Nas’ “One Love” or The Notorious B.I.G’s “Everyday Struggle”. However, these tracks were usually contradicting one song before or after in the tracklisting. Lamar has consistently made conscious music since his debut, but GKMC is a defining milestone where we see him transition from performer to artist.

An excellent precursor to Lamar’s magnum opus To Pimp a Butterfly, and in many ways a much easier full listen that still manages to deliver much of the same moral and ethical teachings. Hip hop is not the genre I immediately associate with goosebumps, hairs standing on end, and the streaming of tears, but Lamar’s music has always been an exception. “Sing About Me, I’m Dying of Thirst” is one of the most moving songs hip hop has ever produced, and one of the greatest songs written in the last 20 years. Period.

Pepsi or Coke? Kirk or Picard? PC or Mac? There’s no wrong choice here, and how you answer is just a matter nuanced preference, more than likely. While Kendrick Lamar’s output over the years has never seen a significant dip in quality, the question usually arises when discussing his catalog is ‘good kid, m.A.A.d. city or To Pimp A Butterfly?’ Much like the choice of cola, captains, or computer, there’s no wrong answer here. It’s always tough for me to personally decide if I prefer one to the other, but thankfully there’s no need to definitively nail that down. There’s something special about the former, however, that shows an emcee at the top of his game on his major label debut.

From tragic tales such as “The Art Of Peer Pressure” and “Sing About Me, I’m Dying Of Thirst”, good kid, m.A.A.d.city takes some tough looks into the darker sides of life and the internal conflict that these seemingly necessary evils create. This has been a staple of the genre for a long time, but Lamar takes a visceral look at in a way that was fresh, poetic, and memorable.

A hip-hop artist rises and falls on their lyrical prowess, whether that be in the form of rhymes, storytelling or flow. On this record, no aspect is left wanting.

From a musical standpoint, you can hear his experimentation with the soul and jazz elements that would come to the forefront on later albums, and it makes for an exciting backdrop. The two tracks that make up the title of this opus have some stellar backing tracks, with Lamar and MC Eiht putting on a clinic on what modern flow should sound like. Anna Wise joins in on “Real”, which constantly vies to become my favorite in the tracklist. The bouncy chorus and the deep groove make it nearly impossible to make it through the runtime without dancing along.

It’s impossible to overstate how impressive good kid, m.A.A.d. City is, as its staying power is a testament to the energy contained within. Knowing what we know about Kendrick Lamar now after winning countless Grammys and a Pulitzer, it’s no surprise that his official debut would leave such an impact on the music scene and society as a whole. The blueprint for hip-hop was rewritten when this record emerged, and it hasn’t been the same since.

good kid, m.A.A.d city is Kendrick Lamar’s best album. I don’t have enough time to convince you if you don’t agree, so I’m just going to get right into what makes it good, period.

The grandest thing Kendrick achieved on good kid is putting such a breadth of human emotion, especially for a young man stuck in the middle of so much, on display. The beats of a hormonal teen trying to get his, freestyling in the back of a hotboxed car with his friends, pressing strange faces that wander on the block, and processing the death of those close to him from cyclical violence are all given a new angle thanks to airtight structure, but a loose execution that shows a supremely confident Lamar with a gifted ear for production.

The first song “Sherane a.k.a. Master Splinter’s Daughter” is the perfect kind of weird, but has a pervasive bassline to ensure you never lose your way. “Bitch, Don’t Kill My Vibe” is, literally, a vibe with dreamy guitars and a mood that screams purple West Coast sunsets with some hearty diet trap production underneath. “Backseat Freestyle” takes a wild sample and layers some crisp bells over it.

More often than not, the tone of the music is a washy, heat-stricken one, with plenty of lower tempo accents and foundations than rapid-fire banger staples. Even at its most hectic, tributing a classic California sound with the legendary MC Eiht (“m.A.A.d city”), excessive hype is just out of reach, always staying grounded in the greater story where it belongs. Oh, and Jay Rock showed Lamar up on his own song “Money Trees” – that verse is still one of my favorites ever in all of rap, don’t @ me.

I could (and would) write a whole feature on this album, and I know I didn’t do it justice with this limited space. Suffice it to say that this album is absolutely worth delving into, especially if you missed it the first time around. Listen to it, dissect it, read the lyrics, see why it was the album that got everyone’s attention on a(nother) young dude from Compton.

What can really be said about good kid, m.A.A.d city that hasn’t been said before? It is a beloved album, and one a lot of people consider one of the best of this decade, if not of all time. For me, this album is both of those things. Kendrick Lamar did something with this release that I swore up and down would never happen: he made me fall in love with hip-hop. In 2012, I was eighteen and stuck on the metal elitist bandwagon for the most part. I hardly strayed outside of that wheelhouse, but good kid, m.A.A.d city changed my entire perspective on rap at that time.

I first heard “Swimming Pools (Drank)” on the radio, and at first I would swear up and down I hated it. Before I knew it, I was listening to the full album on YouTube and absolutely captivated. The beats were the first thing that really pulled me in. Every single song offered something that made me go ‘damn, this is cool’, and Lamar’s flow was absolutely infectious to me. His transitions from singing to absolutely chopping down bars was so different, and I loved every second of it. There isn’t a single song on good kid, m.A.A.d city that doesn’t feel unique.

The beats and flows might have caught my interest, but the thing that made me truly fall in love with this album was the lyricism. Songs like “The Art of Peer Pressure” and “m.A.A.d city” are raw and real, and the latter track alone really changed my perspective on rap. That’s the song that truly made me feel the emotion and intent, and I suppose made me ‘get it’. Kendrick Lamar did something truly special with this album. The mix between real-world commentary with pinpoint flows and the more lively tracks like “Poetic Justice” that could be club anthems was perfect to entice casual and new listeners while satiating old heads. It is an absolutely quintessential hip-hop album for any and all.

That’s all for now! Thanks you very much for reading our thoughts on good kid, m.A.A.d city – it’s been a lot of fun going back to it now that Kendrick Lamar has really come into his own as an artist. What are your thoughts on/experiences with this record? Let us know in the comments! See you all back here in fourteen days for another nostalgic gander at a classic album.