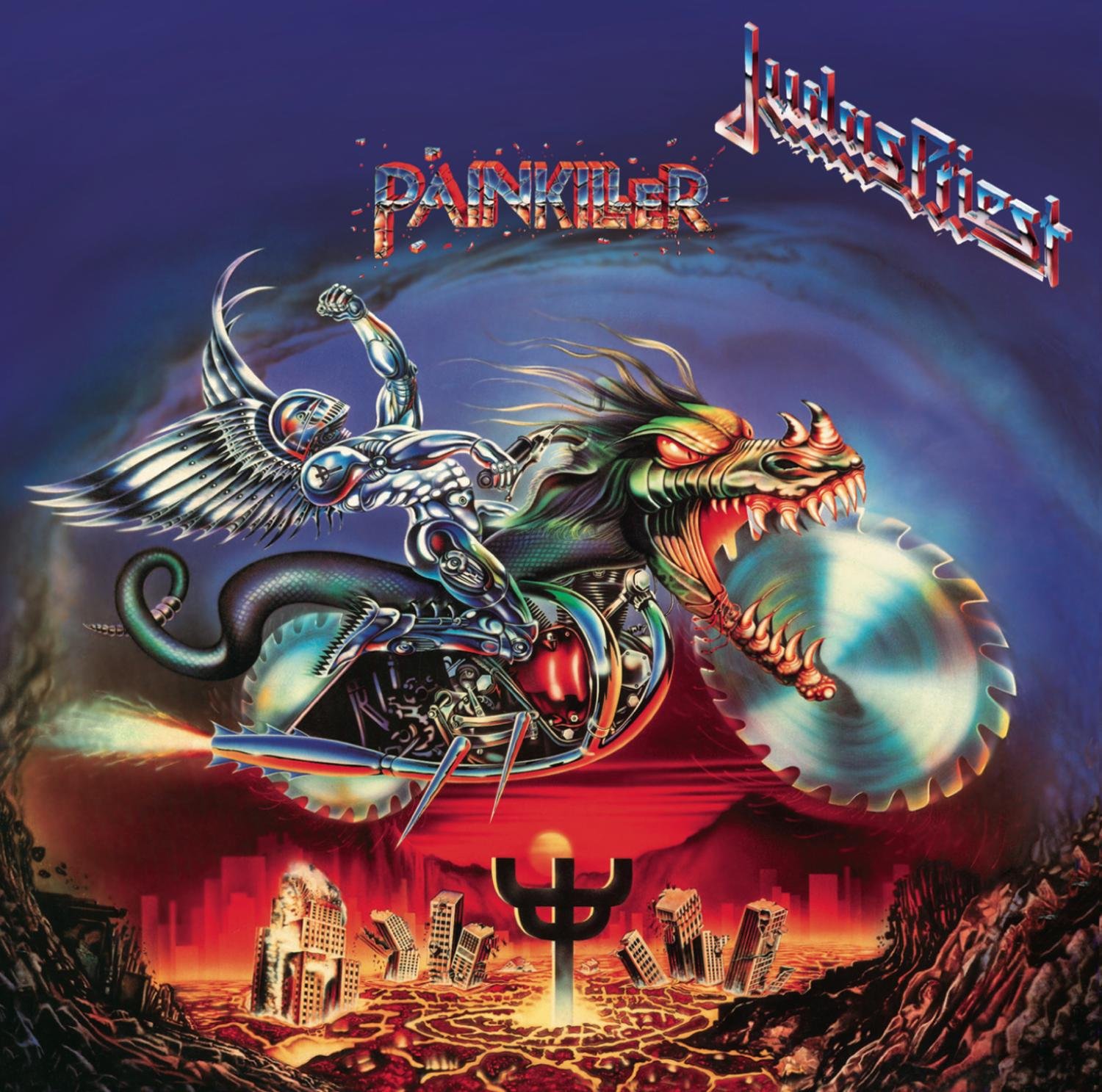 By Dominik BöhmerFebruary 1, 2020 No Comments

Legendary albums like Judas Priest‘s Painkiller don’t need a lengthy, stagily worded introduction, so allow me to keep this short – in the following, you’ll find out what EIN members David and Bille have to say about this veritable heavy metal juggernaut.

So the opening lines of Judas Priest’s Painkiller and its eponymous first track wail forth, so powerful I had to break our rule of not typing things in all caps. This is to say nothing of the white-hot opening drum solo and banshee screech guitars in the intro. After all, an extraordinary album deserves an extraordinary opening, and Painkiller was both and more.

Coming out in 1990, music of all kinds were trending in new and different directions. Grunge was on the doorstep of mainstream rock, metal was in pursuit of extremity, and everyone else in the middle was…well, pick a side – we either got bands like Metallica making their legendarily acclaimed ‘black album’ a year later which, while good, was a marked step down in intensity. On the other side, you could argue, was an album like Painkiller, one that was a step up in intensity relative to the band’s previous work – a no-holds-barred middle finger to adversity.

For the uninitiated, Priest had been the focus of a subliminal messaging lawsuit – another attempt to scapegoat metal and rock for things it wasn’t responsible for – that alleged their music was the catalyst that led one man to kill himself and another to attempt suicide. You can read more about it here – this is relevant because it delayed the release of Painkiller by a few months. While the album was certainly complete before the trial itself, the themes of overcoming tribulations and defeating your enemies was a little more poignant than perhaps originally intended. This made Painkiller’s fire and energy that much more earned and impactful.

The notion of a veteran band hitting any sort of apex on their twelfth, twelfth album is nearly unheard of, but I don’t know how you can’t listen to songs like “All Guns Blazing”, “Between the Hammer and the Anvil” or “A Touch of Evil” and not see them at the top of their game. Songs like “One Shot at Glory” were dramatic and celebratory, a conquering of perceived evil and wrongdoing. These are songs that could ring loud anywhere, from the gridiron to the karaoke bar (good fucking luck), and mean something to someone going through their own personal battles.

Rob Halford’s versatile voice was absolutely triumphant. Scott Travis brought a newfound toughness and speed to the band as their new drummer. The dueling guitars of K.K. Downing and Glenn Tipton vivisected us with their serrated edge. The deep bass hum from Ian Hill was as warm and reliable as ever. The stars aligned and the result was one of the best classic metal albums ever released, and the heaviest they would release since.

Up to this point, Priest had left us Screaming for Vengeance, Hell Bent for Leather, and riding the Sad Wings of Destiny into battle as Defenders of the Faith, but nothing they did was quite as eruptive, or disruptive, as this album. An album ‘faster than a laser bullet, louder than an atom bomb, chromium-plated boiling metal, brighter than a thousand suns.’

I am lucky enough to have cool parents that had a pretty good taste in music while I was growing up. My dad was a huge fan of early heavy metal and thrash, so I had an early introduction to some of the greats in Mötorhead, Iron Maiden, Black Sabbath, and of course Judas Priest. From an early age, Priest were always my absolute favorite of the bands my dad would regularly engage in listening to. He did a lot of work in the garage with my grandpa, so I spent many an evening fetching beers, holding lights, and jamming out to Painkiller. It’s weird for a bands ‘best’ work to come twelve albums in, and that’s not to discredit any previous work (a topic for another day, maybe), but that’s exactly what happened with Judas Priest in my opinion.

When out in the garage, we would often listen to earlier works of Judas Priest, but I always asked for Painkiller. The opening riff of the title track to start this crazy ass album off incensed me like nothing else in my youth. I would regularly be found jumping around the garage, yelling like a banshee along to the music while my dad and grandfather laughed. I’m lucky smartphones weren’t a thing yet, or I very likely would have ended up somewhere on YouTube.

I still find no shame in these antics, as to this day when I hear “Painkiller” I find myself tempted to just go wild. The thundering double bass and breakneck guitar riff pounding out behind the powerful and unmatchable voice of Rob Halford just does something to me that very few other acts can replicate. It’s a dash of nostalgia, mixed with the fact that Painkiller still holds up as one of the most well-written heavy metal albums to ever grace the Earth. There isn’t a single riff across the 55 minute runtime that isn’t memorable, and every second of this album shows this group of musicians firing on all cylinders together.

I briefly mentioned Halford, but he deserves another spot of recognition really quick. There are few people to this very day that have a voice as powerful and commanding as that man. The notes he can reach while maintaining such control and pushing out sound with such force is enough to love in my opinion. “All Guns Blazing” begins with a couple of iconic lines backed by no band that to this day makes my hair stand up: ‘Twisting the strangle grip/Won’t give no mercy/Feeling those tendons rip/Torn up and mean.‘ Nobody can play the frontman like Rob Halford does, and his few-year departure from Judas Priest were easily the darkest years for the band. Regardless of how anybody feels about them, it’s absolutely irrefutable that this is one of the most iconic bands to ever grace metal, led by an absolute legend and all-around badass in Rob Halford. If Arby’s has the meats, Judas Priest has the riffs. Just go listen to “Metal Meltdown” and have the time of your life!

What are your thoughts on/experiences with Painkiller? Are you a fan of Judas Priest, and if so, what’s your favorite album of theirs? Do you have any records you’d like to recommend for inclusion in A Scene In Retrospect? Leave it all in the comments if you feel like sharing!