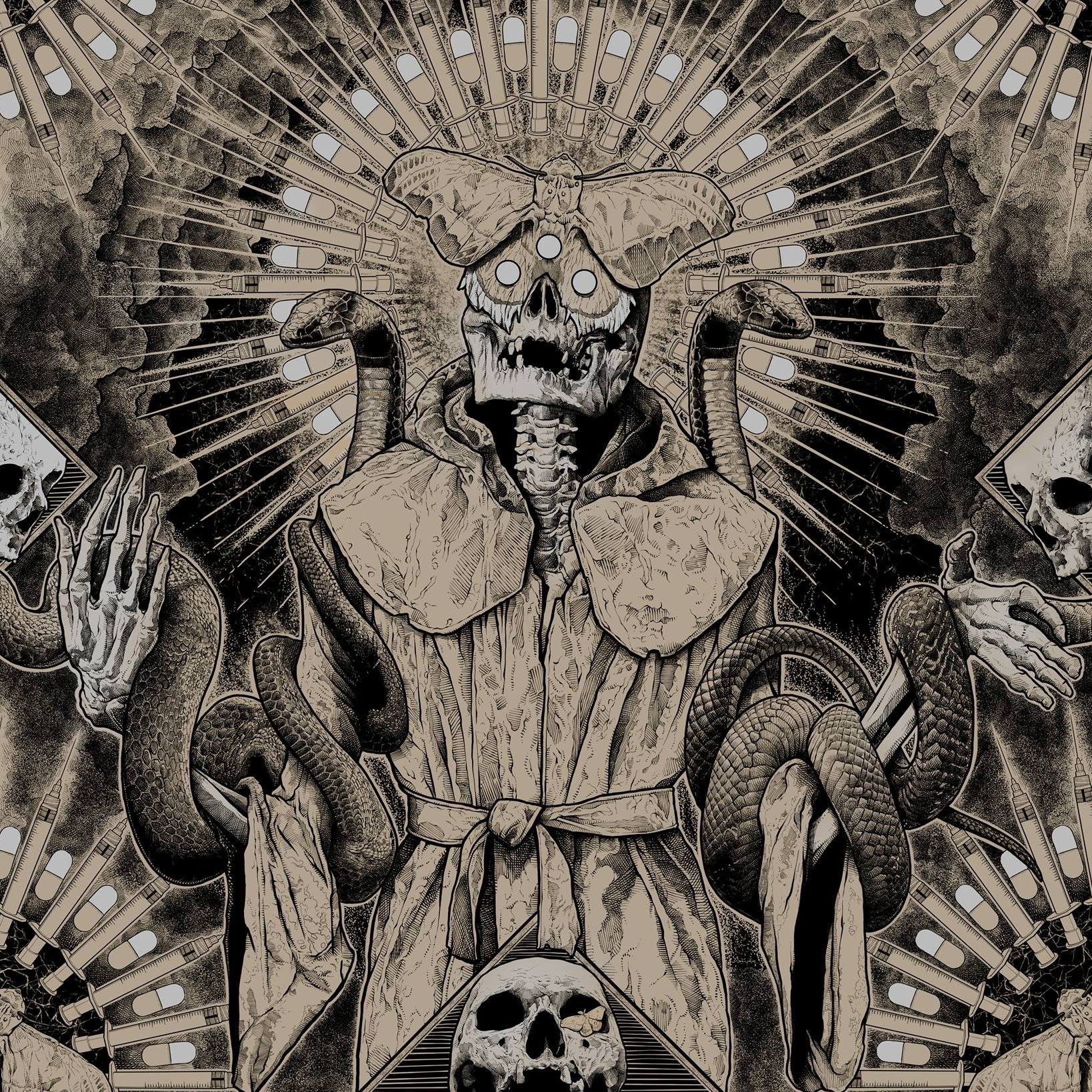 Get ready for a death/grind fireball to the chops, as this week’s featured artist is none other than the mighty Serpent of Gnosis, a supergroup consisting of some other heavily like-minded acts you may have heard of. Helping us dig deep into in the beastly mind of this act is Serpent of Gnosis‘s drummer, Darren Cesca, who was kind enough to fill in the gaps and tell us how this amazing project came to light.

At a lean 21 minutes, Serpent of Gnosis‘s debut album, As I Drink from the Infinite Well of Inebriation is a mega speedy and ultra noisy onslaught, which pounds every eardrum muscle into a soft muffle during its swift run-time. Break those tracks down into their individual lightning-bolt segments and you’ll hear a vast wealth of refined technique, and some superb crafting of metal music.

How does it manage to sound so slick and experienced? It’s because Serpent of Gnosis is an in-the-family meeting-of-minds, featuring members of Job for a Cowboy, The Black Dahlia Murder, Goratory, Despised Icon and Burn in Silence. It was recorded in Darren Cesca’s House of Grind studio, with each member recording individual parts in different locations, but all of them on top form for this new endeavor.

No surprise then that the result is exceptional.

‘I was going for a grindy death metal tone for the album. I wanted it to be powerful but at times, a little bit dirty. I also created the samples and soundscapes used on the album to help transition songs, to create a foreboding vibe to compliment the lyrical content.’

Let’s also make no mistake in clarifying that Serpent of Gnosis is collaborate effort, with each member putting in the work to create the blistering whole. It was, however, originally conceived by Darren and his Goratory and Burn in Silence bandmate, and guitarist, Al Glassman, also of Job For a Cowboy fame. It was from there that the songs were structured on a basic level, with enough room for the lead guitar work of Tony Sannicandro, the bass contributions of Max Lavelle, and the sublimely guttural vocals of Johnny Davy, to fill in the gaps.

The end result is quite something.

‘I think if we decide to do a follow up record someday, then the creative process may be a bit different, with everyone contributing in equal ways to the songwriting process since now we have an established direction for the band.’

Equally essential to the identity of Serpent of Gnosis, is the subject matter. As stated on numerous platforms, this band have opted out of dropping numerous demonic and macabre references in favor of something a little more mature and closer to home. Lyrically, As I Drink from the Infinite Well of Inebriation was conceived by vocalist Johnny Davy who, as Darren can testify, enjoys unifying the entirety of a record under one singular theme. In this case, Serpent of Gnosis‘s primary opus deals with the problems arisen from addiction, and the effect addiction has on the human body both physically and mentally. Whilst listening, one can gain a candid first-person perspective of the resulting tribulations arisen from this disease.

Through this, we also learn that the band’s name, ‘Serpent of Gnosis’ is derived from ‘The serpent of knowledge pertaining to spiritual mysteries,’ which is a direct reference to the near-godly control that substance abuse has over its victims. This very character is portrayed, for all to see, on the album cover.

‘We definitely wanted a medieval, occult feel to it, and I think the artist captured those concepts and rolled them together into one piece.’

It is also a wonderfully appropriate piece of art for the musical tone of As I Drink from the Infinite Well of Inebriation. The majority of the aforementioned bands, which the musicians of this project were involved in, dealt with tracks of a three to six minute nature, whereas the tracks created by Serpent of Gnosis average at two minutes apiece. This makes for some seriously controlled bursts of grind, which fully exemplify the classic saying of ‘less is more’. There are several moving parts to each song. Each track is a ravenous gem, and together they make a whole which blends more or less seamlessly from track one through ten.

Darren explains that it was a very likable idea, which made for a fresh perspective, whilst posing the challenge of creating something memorable within such a fleeting time span.

‘I think everyone stepped up knowing what structure that we were going for. We’ve all been in bands that write closer to 3-6 minute songs, but SOG was something different. It was great to see everyone come to together and embrace the sound of the band.’

All in all, As I Drink from the Infinite Well of Inebriation is an album to be enjoyed and absorbed. Darren recommends that you not only turn it up real loud, but to also read the lyrics as you listen. Through this, the music, the vocals, and the soundscapes in between, you can gather a real sense of what the band is striving to convey. You can then experience the Serpent of Gnosis journey to its fullest effect.

‘Albums are about an emotional connection and experience, and I think we really focused on that. From the artwork, to the production to the tones used on this record. We wanted to be unique and create a different sound through this ten-track journey.’

Alas, there are no immediate plans to take this blistering music to the live stage, though one can only imagine how crushing an atmosphere it would provide. The biggest snag in making this happen is that the band are so widely spread geographically. But let’s never say never, eh?

And that leaves only one big remaining question: What lies in the future for Serpent of Gnosis? Darren insists that this is entirely down to the fans. Should As I Drink from the Infinite Well of Inebriation receive the deserved level of praise, there is a distinct possibility of a returned venture. Let us hope that this will indeed be the case.

‘As musicians, we love what we do, and we work hard at it. I will always push my fellow musicians to achieve the best they can…

‘Nothing is planned, but everything is possible.’

As I Drink from the Infinite Well of Inebriation is available to hear on Serpent of Gnosis‘s Spotify and Bandcamp pages. For all other news and info, visit their Website and Facebook.