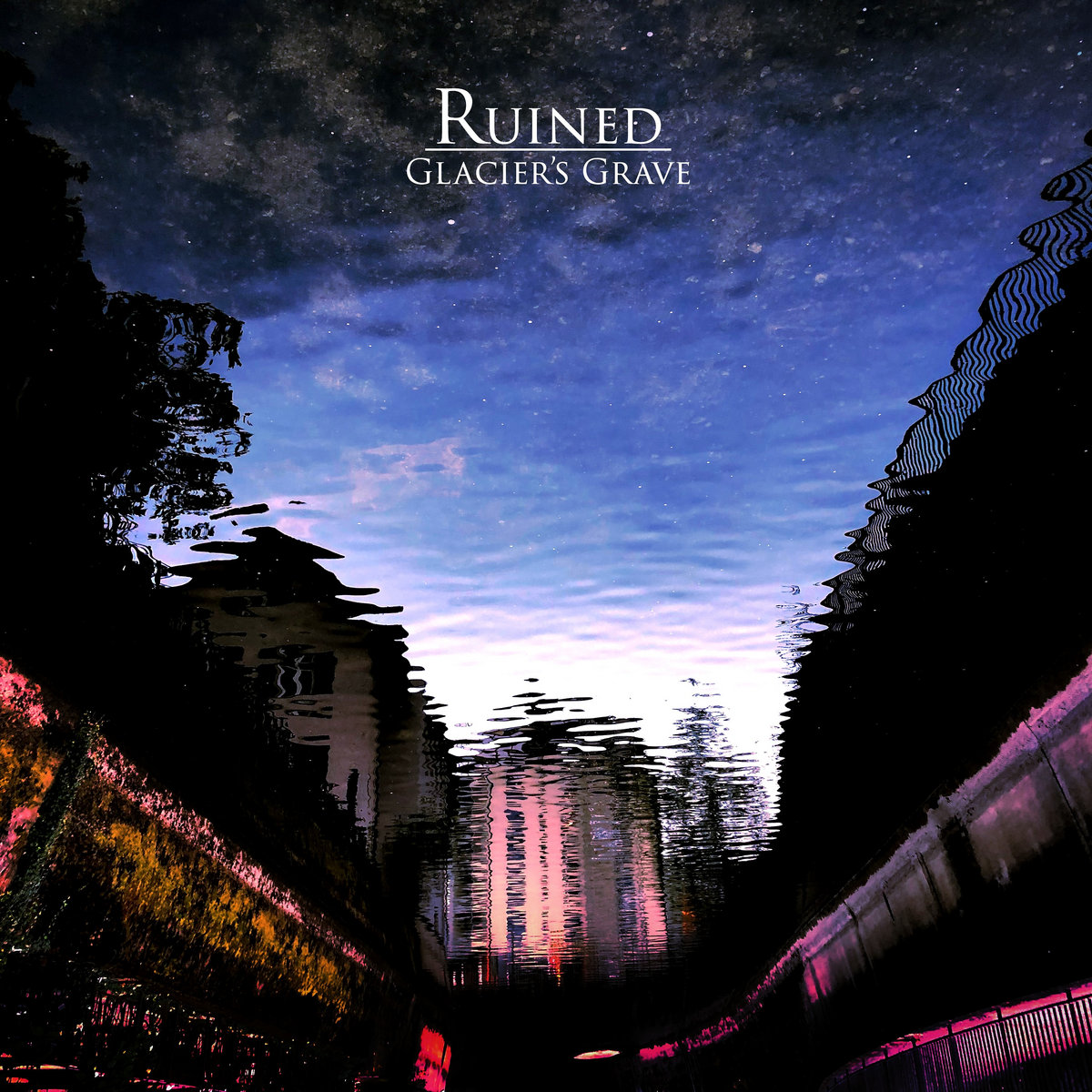 By Dominik BöhmerFebruary 24, 2020 No Comments

Doomgaze. You’ve probably seen this float around the blogosphere, thinking that it’s another one of those hip buzzwords us music journalists like to invent, but nope, it’s a genuine genre descriptor with its own defined set of sounds and aesthetics. Of course, its denominators aren’t entirely distinct from those of similar genres adjoined to its stylistic edges, and individual bands might bring in select outside influences as they see fit, but the elementary building blocks of doomgaze are doom/post-metal, post-rock, drone, and a whole lot of (you guessed it) shoegaze. Justin K. Broadrick of Godflesh fame basically invented – or at least popularized – this sound in the early 2000s with his Jesu project, which still remains the best entry point to the whole genre for newcomers, if you ask me.

One of the more underappreciated bands inhabiting this singular musical space are Ruined from Grand Rapids, Michigan. Well, perhaps is should rather say is Ruined, because at present, the band is only composed of its founder Zach Curze. Formed in the summer of 2013 after the dissolution of another project called Longing, which folded because his ‘ambitions always seemed to outpace most of the musicians I was collaborating with’, Curze set out to create a solo project. He then spent a few months working on material that eventually became the band’s first cassette release Vessel, before he finally felt the need to enlist a full-time drummer. This is where Sky Moy entered the picture; together, the two spent the next five years tweaking their unique two-man approach to doomgaze.

To tie things back to Mr. Broadrick for a second, Godflesh and Jesu’s impact on Ruined can’t be overstated, both musically and regarding the project’s eventual name, which is taken from the second track off the latter’s Heartache EP. Curze draws his influences from many of the usual suspects in general – Type O Negative, Soundgarden, Mogwai, Earth, Deftones, Wolves In The Throne Room, Ride, My Bloody Valentine, Slowdive, The Smashing Pumpkins, and Cocteau Twins to name a few – but has also admitted to taking cues from a few more, shall we say, surprising sources. For example, his bass playing is by his own admission hugely indebted to Les Claypool (Primus), while his lyrical style borrows from acts like Cat Stevens, Neil Young, Rush, and Jethro Tull. He’s apparently a huge fan of nu-metal as well, listing Slipknot, Static-X, and Korn amongst his formative influences.

Outside of music, Curze draws not only from his own life experience to inform his work (‘Ruined has always been a great catharsis for traumas I have experienced or witnessed. Pain can be an infinite well to draw from’), but also from the lore of fantasy settings such as Games Workshop’s Warhammer 40,000 as well as the poetry of W.B. Yeats.

Like their fellow purveyors of everything doomy and gloomy in Bell Witch, Ruined manage to carve out their monolithic sound using nothing but bass, drums, and vocals. Curze originally intended to exclusively rely on his own contributions (bass and vocals), but after playing a few gigs with Moy, he realized that they might have struck gold with the combination of their talents: ‘When Sky joined up we had such great live chemistry. He would hit everything so fucking hard that it really pierced through the low-end drone of my bass beautifully. I think this added a much needed ardor to the otherwise grim tones of both my bass and vocals.’ Thus the band’s preferred set-up was born, and even though Moy is no longer part of Ruined after moving away from Grand Rapids, his initial influence on Curze’s approach to the project is still tangible.

As I’ve mentioned earlier, Ruined have been around since 2013, but it was only in 2018 that I’ve personally taken notice of the project. Woven Shade immediately caught my interest with its mixture of borderline hurtful distortion and mournful melodies that pierced through that heavy veil of noise.

Everything Is Noise: When I first heard Woven Shade back in 2018, I felt like the album was distorted almost to the point of physically hurting, but it also had these somber, beautiful melodies that held everything together.  Is that balance what you wanted to achieve with your music, or was it just a byproduct of your writing and recording process?

Zach Curze: This release was the result of many years of hard work and frustration. Many of the songs we had been playing since 2014 and though we loved them we were ready to move on. The mixing also traded hands to three different people over the course of a year. We had, and still have a lot of trouble finding people who are comfortable working with our formula. We walk in and say, ‘Alright, we have only bass and drums. But beyond that the bass is going to be extremely distorted and delayed the fuck out while my pal here beats the shit out of their kit. We want all that really loud but balanced. Oh and also I am going to sing really subtlety and I want you to bury that shit in reverb. Get it done.’ I am not a sound engineer, but I can imagine that might be a stressful request.

But ultimately I think the record portrayed exactly how we were feeling: sad, pissed off, dynamic, hopeful, vanquished, tired and generally disheartened. I was very happy and relieved to bring this record to fruition and some of my favorite songs are on this record. But I had to take a break from this record shortly after it was released. Ultimately though I am proud of what we achieved and I hope others can share our pain we experienced during the creation of that record. So to answer your question I would say it was not our original vision but a byproduct of the nightmarish hellscape we had to endure to forge it.

EIN: Your most recent album, Glacier’s Grave, was released last year. Please tell me a bit more about how it was written and recorded.

ZC: This record moved much more smoothly. The main hurdle was the fact that Sky moved away, but my friend Keith was willing to fill in at least to complete this record. The majority of this record was written while waiting for Woven Shade to be released, so I already had a good head start. I also began to shy away a bit from writing ten-minute-long epic doom chronicles and focus more on pop-sensible material.

I tried leaning less on technical skill and more on general good songwriting. Though I think the mid-section on “Worse Than Usual” may be my favorite bass line I have ever written. Whenever I listen to that I have a moment where I think, ‘Holy fuck, I wrote that shit?’ But everything on this record including the title drew almost exclusively from growing up in Michigan, excluding the final track “Rust Is Killing Us.” I was really inspired by the philosopher Hypatia, and the title was actually coined by Thom from Planning For Burial and I asked if I could use it. Thanks Thom!  But overall I believe this record embodies more of the original concept I had in mind for Ruined back in 2013 and it was fun to bring that vision into light.  It was also the first record we added some synthesizer, and it was fun to explore that realm.

With a life well lived comes a fair share of good and bad times, and a band is no different in that regard. Curze especially connects the live setting to a good portion of is great experiences while in Ruined, saying that ‘it has been wonderful having people come up to the merch table after the show and share their stories and how they connected with the subject matter (growing up around alcoholism, abuse, etc.). Feeling comfortable being vulnerable with total strangers and having them reciprocate has been a hugely humbling experience that I have cherished.’ In turn, the worst band-related moments he has lived through include the day Moy announced his departure to him, as well as ‘the headaches we had finishing Woven Shade’. He wouldn’t have wanted it any other way, though, referring to the negative experiences as opportunities for ‘building character’.

At the moment, Ruined is somewhat hovering in limbo; there’s no full-time drummer involved at the time, and Curze himself is focusing on a new side-project called Drôw, which he is currently planning out a full-on tour for. Still, he was quick to reassure me that even though this might affect Ruined at present, he’s always looking to keep the band alive in some way, shape or form: ‘The future is unwritten but I definitely always have Ruined in mind.’ Curze is already looking into future recording opportunities, as well as pondering whether or not he might branch out into writing both bass and guitar parts for the project’s next release. It might be a while until we hear from them again, but there are exciting things to look forward to.

And this brings us to the point where I would like to give the floor to Zach Curze for one last time. I asked him if there was anything he’d like to say specifically to the Everything Is Noise readership, and this was his response:

‘I would like to share two sets of lyrics that have always inspired me to push ahead whether it be for musical endeavors or simply life goals. One being from Cat Stevens/Yusuf Islam: ‘From the moment I could talk, I was ordered to listen.’ Don’t let anyone conquer your spirit. And the other lyric is from the band Refused: ‘Rather be forgotten than remembered for giving in.’ Never compromise your ethics or humanity for anyone or anything. ACAB. Kill God. Peace brother, fuck you bastard. I don’t need your false friendship. If you’re 555 I’m 666. All that shit. If I can share any wisdom it’s that it’s better to stand against the current than to drown with all the other mouth breather drones. Fuck ’em.‘

If you like what you’ve read about Ruined above, and if the tracks I’ve embedded were to your liking as well, be sure to head on over to their Facebook and leave them a like. You can also listen to all their releases, including their early EPs, on their Bandcamp.