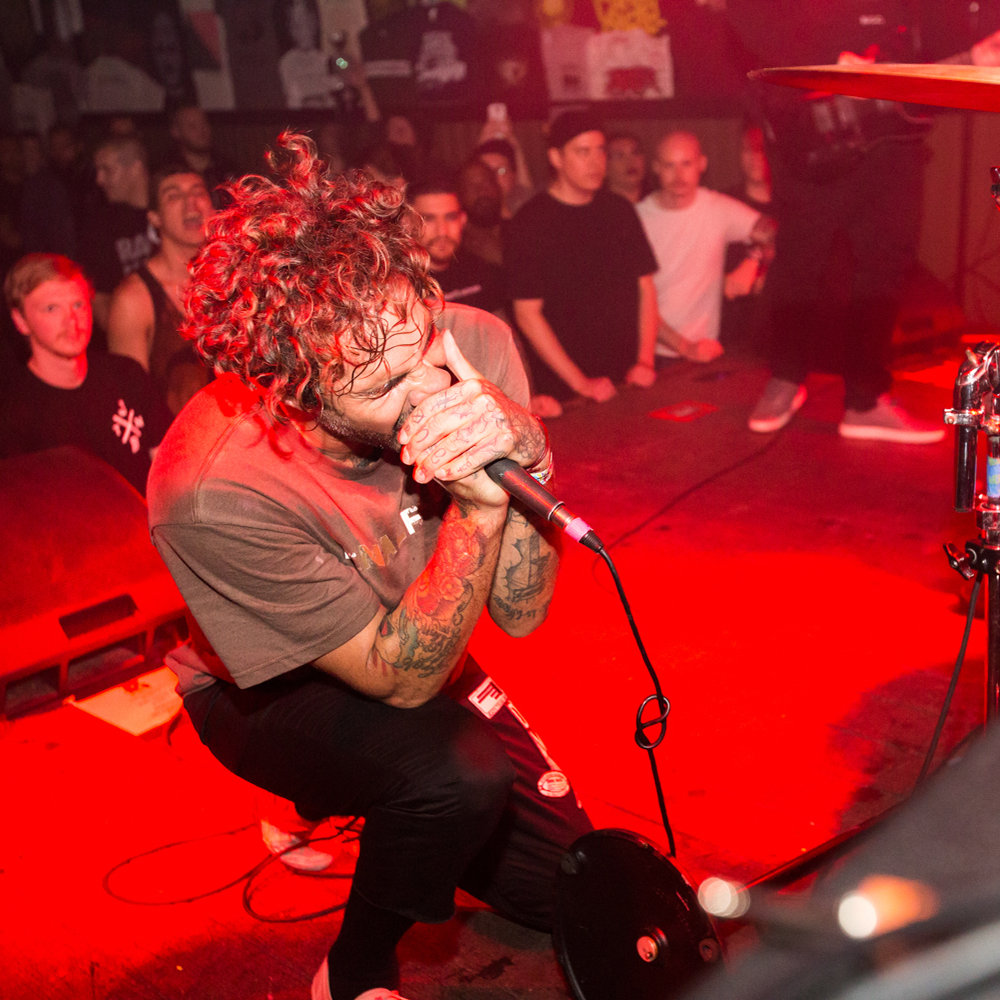 By Ashley JacobFebruary 3, 2020 No Comments

Tired and frustrated? Feel like you need a hit to the ears capable of simultaneously pounding a hole in the earth? Or perhaps you’re still in early January mode and you haven’t quite woken up to the new year yet. In either case, there is a medicine for your ailments. It’s a quick dosage, but it’s designed to last. The only catch is that it requires a rather strong constitution… but you’ll like it.

This week’s WFA brings you the thunderously hardcore sounds of Southern Californian five-piece, Pressure Cracks, a band so heavy that their music should come with a cautionary warning. Each of their recent releases provides a swift and devastating trip for the senses, and Everything Is Noise is honoured to dive in for a deeper look.

The band itself is comprised of five members, two of which are guitarists for that extra level of pelt, and none of them are strangers to the local band scene. Their past experiences have culminated in the Pressure Cracks product, and in this modern musical landscape, it could be considered the ultimate hardcore musical experience. Their debut self-titled release from 2018 is a high-energy barrage of punky nuances, merciless breakdowns and explosive thrashy riffs. In short, it’s brutality in the great tradition, and a distinct hit at that. Within the EP’s four track,13-minute run time, you get the works. Amidst the distorted chaos, the talent, showmanship and dedication is easily definable. Tracks “Collages and Collagen” and “Stay Inside, Stay Alive” in particular, demonstrate the band’s fangs-out level conviction, and the substantial bulk of the songs mean that Pressure Cracks‘ music might even appeal to listeners on the periphery of the genre. It’s a stunning debut.

Following on from this opening act, Pressure Cracks’ relatively young timeline continues to evolve. If you listen to the Pressure Cracks EP and you like it, then you’ll be well and truly blown away by the sequel, EP, This is Called Survival, which was released at the beginning of 2020. This is Called Survival builds upon its predecessor in just about every way imaginable. The riffs and tones are monstrously explosive, and the lyrical content serves as some hefty food for thought.

This is particularly notable in the opening track, “Like Father Like None” and this song is, in many ways, the band’s ultimate showcase. It features some marvellously nasty breakdowns and it’s level of precision-timed brutality continues in the following track “Ready For You”, which seems to grow progressively more intense across its 2:50-minute run time.

The technical prowess behind the band’s sound is easily detectable in the EP’s third track “Shhh”. The breakdowns found here are faintly reminiscent of the more bone crunching moments of The Dillinger Escape Plan, and they show off a sonic aptitude which is achieved through no act of laziness. This is Called Survival gets a speedy finish in the form of “Big T Youth”, which possesses a hell of a lot of fortitude in both the musical and lyrical department. In all, the EP, may be a short ride, but that’s to its advantage. To call it ‘wild’ would be an understatement.

Another highly distinct feature are the vocals, performed by the Pressure Cracks singer, Jason Butler. His voice is every bit as vicious as the guitar tones underlying it. There is often a prevailing tradition in US hardcore music, whereby the vocalist ‘orates’ rather than sings. Take for example the near out-of-breath hollers of ‘… Seven billion questions… You’re trying to tell me there’s one answer?’ and ‘Heaven might be suitable, but Hell on Earth is beautiful‘, both of which are found on “Big T Youth”. These conviction-etched words bulk out the relentless screams Butler provides over the rest of his songs, and boy does he scream? Listen for yourself to hear the evidence!

From an instrumental standpoint, the songs are remarkably technical in parts, with the riffs finely engineered to devastate. This means that when it comes to a live setting, there is no hiding any mistakes, even behind the wall of noise you can expect from this band. Lucky it is then, that Pressure Cracks are an extremely proficient outfit, and their live performances are near record-production standard. After all, this is American hardcore we’re talking about, and so the stage is where the music flourishes. Dig deep and you’ll find their delightfully nasty cover of “Sabotage” by The Beastie Boys. In all they are every bit as loud and energetic as one can imagine, and as far as touring goes, they show no signs of slowing down. Just to exemplify, Jason Bulter recently performed two dates in Japan, under the guise of Fever 333.

Ultimately, Pressure Cracks serves to remind us why some neatly crafted hardcore metal is an important tool in your weekly musical arsenal. To strip down, abnegate melody for the better part, and focus the entirety of your frustration and rage into one concentrated discharge is a healthy exercise. Perhaps it may help to think of the hardcore scene as a less of a platform for macho showboating and more an abiding place to let those angry nuances hit the ground running. As with all good music, it serves as an art form to behold, and also a reflection of the messy state of affairs that is everyday reality. The magic of bands like Pressure Cracks is the way in which they re-invent the wheel crafted by those before them. Hardcore punk, particularly through the flagship names of the US scene, has been going on for a while. The quality modern purveyors have, however, found a way to ramp up the heaviness.

It ain’t quite punk, it’s kind of not metal either, and it’s also a heroic dose of both. Confused? It’s just the nature of the beast, and Pressure Cracks are as beastly as they come. The fact that there are only two EPs to their name so far, will hopefully mean that there will be a wealth of new releases in the future. Bring it on!

To hear more from Pressure Cracks, check out the band’s Spotify and Bandcamp pages. For all other news and info visit their website and Facebook page.