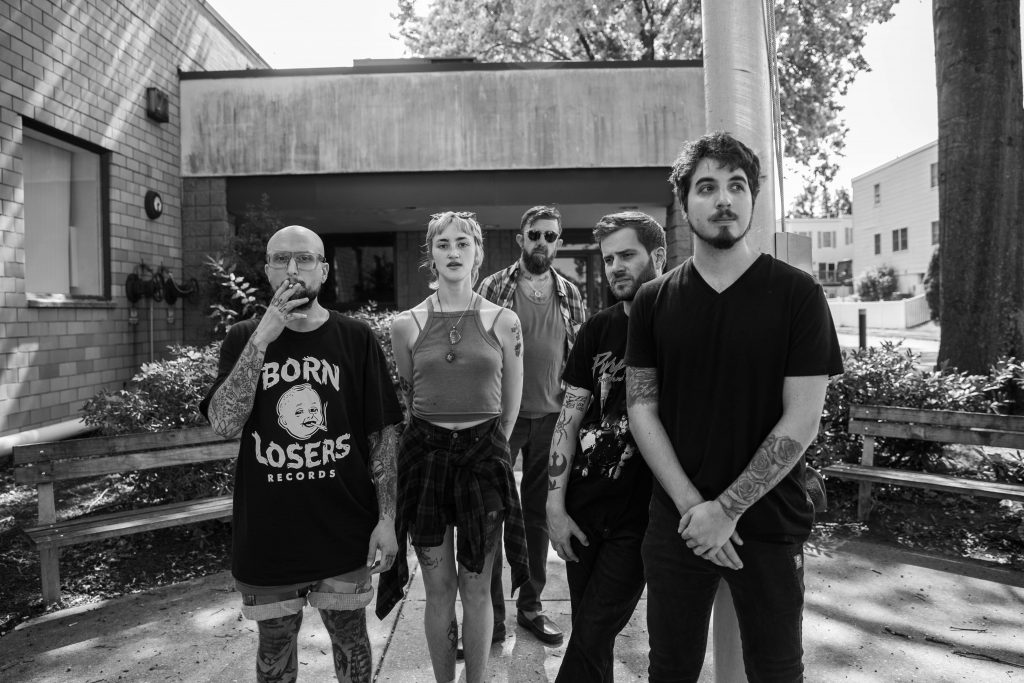 By Carlos Vélez-CancelJune 6, 2022 No Comments

There is no better sensation than discovering a band at a show for the very first time. There’s something so unexplainably primal yet intimate about this crucial encounter that is a set of musicians putting their heart on their sleeves and playing for an audience that is unconditionally willing to give and receive the energy only a concert can emit. The emotions are only amplified when the band in question sounds great – the kind where you can’t wait to get on your phone and check out more of their stuff after seeing them. This was exactly my experience with Cigarettes for Breakfast, this week’s Weekly Featured Artist.

I caught Cigarettes for Breakfast live a little more than a week ago, opening for shoegaze/atmospheric rock powerhouses Slow Crush and SOM on showroom for mausoleum-turned art venue PhilaMOCA, located at the very heart of Philadelphia. To be honest, I would go on and write a raving concert review because all the bands were truly fantastic, though I’ll just sum it up by saying that I could not have asked for a better lineup. Of course, the surprise of the night came in the form of Cigarettes for Breakfast and how, with such an unassuming band name, they were capable of unleashing such wall of sounds.

Precisely originating from Philadelphia, PA, Cigarettes for Breakfast was founded in 2019 by guitarist, songwriter and producer Matthew Paul Whiteford, with the endgame of continuing forth the late ‘80s/early ‘90s alt and shoegaze sound popularized by the likes of My Bloody Valentine and Ride and applying it to today’s music climate. Recruiting Tony Rossi on drums, and Cameron Kynnett and Becca Katz on vocal duties, Whiteford released the self-recorded, self-titled debut EP in February 2020 – a tight collection of songs that are satisfyingly grungy and lush in equal measures.

The band lets you know that right away with the opener “The Bee’s”, with its lo-fi approach to alt rock reverberating your surroundings with encapsulating riffs and enchanting vocals. The track, along with the rest of the EP, paints a hue of somberness that feels grounded (in contrast to the otherwise spacey soundscapes) and not desperate whatsoever – instantly compelling due to the overall performance and entrancing in execution thanks to the band’s focus on repetition.

“Daylight” follows Cigarettes for Breakfast’s knack for consistency, this time depicting a sonic time-capsule as the fuzzy distortion of the guitars and vocals kick in in stellar fashion. With just these two songs, I can vouch for their sense of melody and atmosphere; they are gripping but not to the point of finding yourself lost and completely unaware of the musicality of it all. Meanwhile, the last track “Patience” sends you further down with its doom – sludgy even – demeanor, with the vocals sounding more hypnotic than ever and a drum snare pop that is to die for. Indeed, what a stark yet welcoming sendoff to an otherwise dreamlike EP.

Of course, with Cigarettes for Breakfast kickstarting their career in 2020, they were not immune to the collective stagnancy caused by the COVID-19 lockdown. As such, their second effort, and debut full-length, Aphantasia would come to fruition because of this. Seeping its way to the world on September 25, 2020, its title alludes to the phenomenon of aphantasia, or the inability for someone to create mental images of people, places, or objects. According to the band’s bio page, choosing Aphantasia as the title ‘emerged from the stress of living in a world where people fail to see the big picture and struggle to wrap their heads around difficult concepts’. Undoubtedly, it is difficult not to equate this phenomenon – and the sound of the record as a whole – to the hardships brought forth by the lockdown and the resulting frustration coming out of it, prompting the release to portray ‘a story that leaves the listener feeling stuck – but then is ultimately left with a sense of hope’.

Aphantasia, then, is all about tension and release, and a band successfully harnessing a defining sound of their own. With just an EP and this album under their belt, Cigarettes for Breakfast managed to break away from being on their influences’ shadows and concoct a shoegaze sound that is, quite frankly, menacing as it is uplifting. There’s a certain aura of uncertainty on tracks like “Entitlement” and “Breathe” that feel rather urgent, with new (and present-day) vocalist Donnie CoCo providing an edgy yet mystical slant to this otherwise airy subgenre. The droning on both songs is feverish and the guitar leads and basslines are textured, making it intriguing for the listener to pick up certain passages or nuances and stick with them for the remainder of the songs.

Lead single “Home” acts as a linkage between the band’s harsher reveries presented on the aforementioned tracks and the more atmospheric, celestial sonorities that are found within the latter-half of Aphantasia. The appropriately titled “Quarantine” is the personal highlight out of the bunch (to which, in hindsight, is the song I heard live that ultimately sold me on this band) as Cigarettes for Breakfast brings back the doom sound heard on “Patience”, only this time laced with the intensity of post-rock, making for a listen that leaves you gratified. The vocal harmonization here is stunning and the dynamics coming from the drums gives such a personality to this already-superb track. The closer “If Someone Could Help Me, Please.” further ventures into the post-rock realm, even treading on ambient grounds as the track unfolds its pristine layers to unravel a wall of sound that is both riveting and calming.

The thing that struck me the most with Cigarettes for Breakfast, though, is their attention to storytelling. It’s not too common to find a band that takes great care in putting the pieces together to illustrate a well-crafted, well-rounded idea that manages to amplify their sound. This is exemplified in Aphantasia, as mentioned earlier, however on the early stages of the following year, they released the two-parter single Wait, a notable step-up to said attention to storytelling, both emotionally and sonically. Essentially portraying the scenario of two parents arguing through the perspective of their child, Wait captures both the tender yet bleak nostalgia and sense of escapism that surrounds this event. Whiteford further comments on the single:

‘I tend to conceptualize around big picture ideas for the most part. Sometimes they do end up being about specific people in my life… I think one of the beautiful things about “Wait” is that most people can relate to being a child and overhearing their parents arguing. What that means and what memories that brings up for you personally could be completely different than they are for me. This could be something that happened a lot or it could be something that only happened a handful of times. I think sometimes it’s important to remember that nobody is perfect. We are all human and we’re all floating around on this giant space rock together.’

You’re instantly pulled into the story with the first track “I Thought I Was Transforming Into a Butterfly but I Am Yet Another Moth to the Flame” (hell of a song title!): Heavy synths barrage you from both sides in an ebb and flow fashion as you hear the playful shouts of children and a percussion resembling a heartbeat in the distance. Evocative right from the get-go, the song really opens a mental veil that elicits feelings of innocence and of an embracing warmth, while at the same time sporting out a somberness that serves as a reminder of the fear and confusion that comes with witnessing such an event.

Following it is the second track “Wait”, an engulfing shoegaze cut that never loses its momentum. Here, Cigarettes for Breakfast sounds much fuller than on previous efforts, the overall orchestration exerting a confidence and a hunger that denotes a band eager to show what they are capable of. The cohesiveness displayed throughout comfortably competes alongside other songs from established shoegaze acts, and the reassuring tone of the lyrics and vocals crystallizes the song into a grand emotional listen.

Cigarettes for Breakfast‘s proficiency at making damn good shoegaze is evident from the start, but it is their attention to detail and their effort to make sure their music manifests itself as a truly resonating listening experience that sets them apart from their contemporaries. It’s pretty clear that the band’s fresh trajectory is on an exponential rise, and I am but excited for what they’re to offer in the near future. And, you know, it’s just a great feeling having had the opportunity to stumble upon a band like this live. At a time where things seem pretty much hopeless across the globe, moments like this give you that push to continue moving forward. Vulnerability aside, do not sleep on this band – this is just the beginning for them.

Cigarettes for Breakfast is:

It’s looking like the band is cooking up more shoegaze goodness for us to indulge in – I reckon it’s a good time for you to give them a follow on Facebook, Instagram, and Bandcamp!