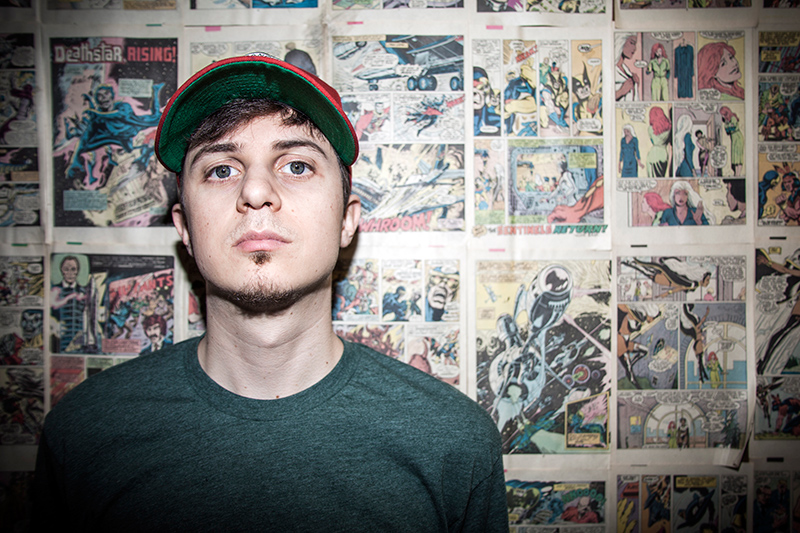 George Virden Watsky started as a slam poet and first got viral with 2011’s single “Pale kids rap fast”. At this time, he already released a record called Watsky in 2009. His sophomore release Cardboard Castles came out four years after. Two more records, All You Can Do in 2014 and x Infinity in 2016 were later on added to his discography. This year, he came out with his brand new album, Complaint. With his 2016 debut novel How To Ruin Everything, Watsky even entered the New York Times Best Seller list. Needless to say that this 32-year old American is talented when it comes to his work with speech and language, but how does it sound?

Welcome To The Family

The record starts with a slightly detuned piano and some proper rap before Watsky evolves his voice more into singing. He also maintains his skill to speak (in poetry slamming style), respectively to sing very fast. The instrumentals don’t vary that much but culminate in a very dancey and rhythm-changing chorus. Watsky’s very clear way to speak is pure joy, as one can understand each lyric and poetic twist that he works with. “Welcome To The Family” is basically about Watsky meeting someone who he’s about to fall in love with. He’s stating that it’s ‘not so bad to be a Watsky’ and he basically wants the person to be part of his family. This storyline continues in the following “All Like Whatever”. Watsky sings about daydreaming of a person (‘I dream of you and I’m all like whatever I got to do’).

The third song, “What Goes Up”, also catches up with a ‘love-story plot’. But the following songs show that there’s no lyrical connection between the songs and no coherence addressed, so Complaint doesn’t follow a storyline or concept. Musically, it’s the first track to feature some cloud rap elements that are mainly done with auto-tuned vocals. Singing about ‘getting high ‘til we both float away’ also shows a more distinct connection to nowadays cloud rap. This aspect even gets stronger on the following track, “Fuck It Up”. “Mean Ass Drunk” is the first track that really catches up with Watsky’s poetry slam skills and stands out with these as well. Bound in a very summer-vibey refrain, he manages to add a narrating aspect to the repeating bass lick and minimalistic groove. His voice first shows proper emotion and branches out of his comfort zone, whilst it does not hide behind autotuning.

At times, Watsky manages to even get cheesy, which can be shown in choruses of songs like “What Goes Up” or “No Complaints No Conversation”. Watsky‘s music isn’t hard; it sounds very soft and tickles our ears with soft synth pads and light grooves. His voice often ranges into a high falsetto singing, even if he could use his more spoken word voice more. It’s the fast and properly rapped parts that make Complaint interesting. The rest of the songs on this new album are a bit too formulaic, pop-structured and repetitive to really stand out on an artistic level that Watsky is able to deliver.

Sure, Complaints is a record that shows a high mass-appeal and seems to fit into the rising trend of hip-hop. Songs like “Feels Alright” try to catch up with an evil gangster-rap vibe in style of Eminem, but misses an intense culmination. An instance might be that the instrumentals build up but keep silent and careful, instead of breaking out of their cage. I think a song like “Feels Alright” could have more balls in its sound. For example, some early nu-metalish Limp Bizkit vibe, some shouts or screams, could’ve made for a better chorus. Sure, it ‘Feels Alright’, but really lacks some proper punch.

The repetition, omnipresent in a lot tracks on Complaint, makes the songs become stale and almost annoying, which is the case in “Limo 4 Emos”. The beat and synths sound as cheesy as an early 2000s song by your favorite boy-group. Also, I want to say something “Whitecaps”, which is the last song on Complaint. This song sums up each element that Watsky worked with on this album. He creates a psyche R’n’B mood that sounds similar to Twenty One Pilots, whilst some trap elements add to the rapped bridge. But as in the previous songs, the song’s structure and Watsky‘s treats get very repetitive during playtime.

Complaint isn’t a bad album. Watsky knows how to handle his lyrics. He has a great voice and is skilled when it comes to singing, spoken word, and rapping. It feels like he didn’t dare to break out of his cage, even if he could. Like a lazy lion that was caught in a trap. He basically can leave easily but feels too comfortable to do so. The songs on Complaint are very safe in their structure and deserve to be called good pop music. But there’s always this one thing in my mind: Watsky could’ve done so much more.