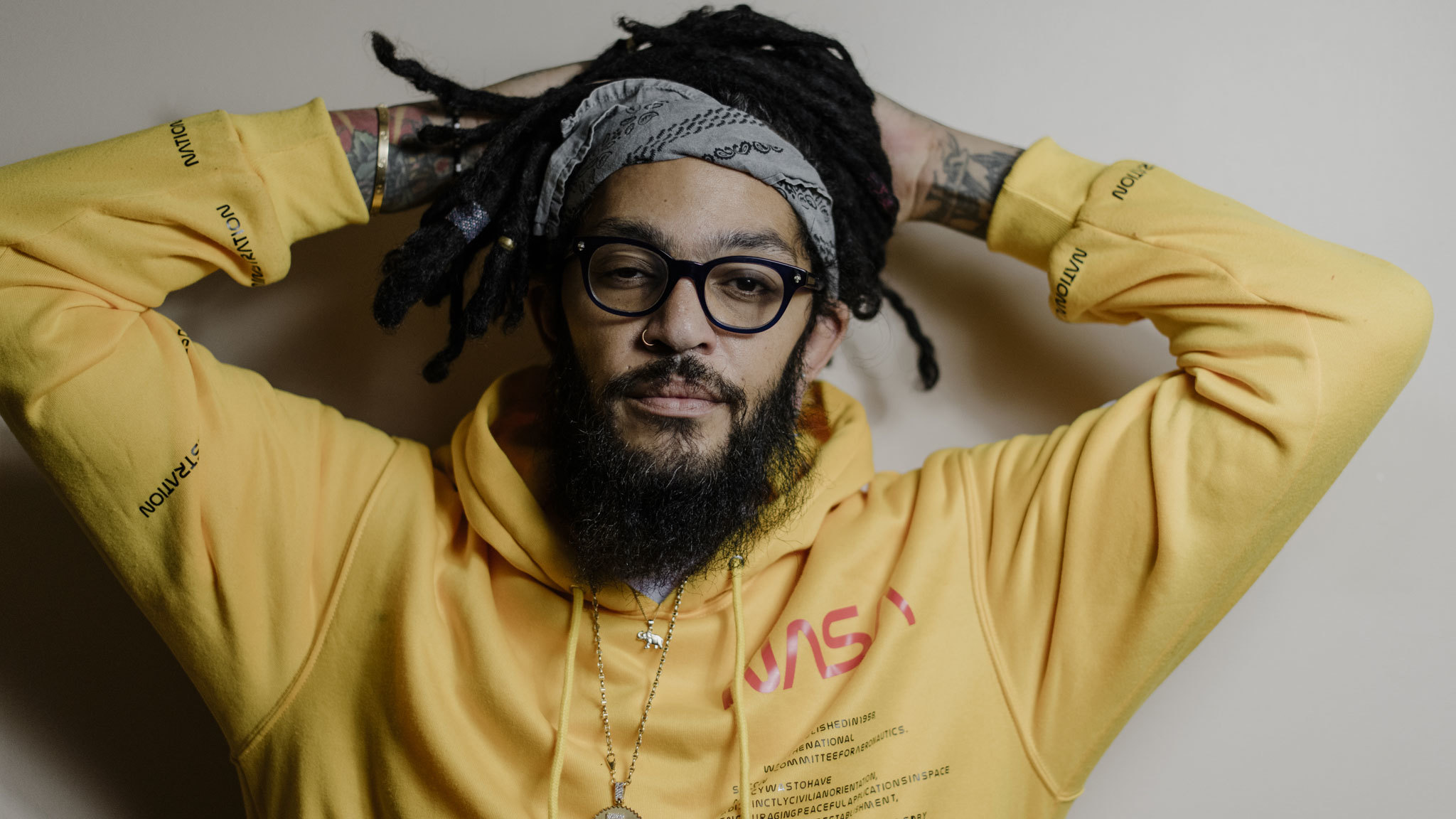 By Shaun MilliganAugust 14, 2022 No Comments

Never Slept Better showcases Travie McCoy at his most marvellous yet. Returning after several years of tumultuous absence, the wait proves worthwhile as both music and man are stronger than ever.

Remember Gym Class Heroes? It’s been a while since they produced anything (something that doesn’t seem set to change in the near future according to multiple sources), but there was a time when their hip-hop-infused radio rock seemed to permeate every available media outlet. Whether it was ruminating on their pride in a partner who makes them pancakes or likening oneself to audio equipment, their catchy, well-written tunes brought them undeniable success and respect at the time from peers, critics, and fans alike.

Frontman Travie McCoy actually began forging his own solo music adventure prior to GCH‘s last studio album all the way back in 2011. The charismatic vocalist’s more rap-oriented musical direction was displayed on his 2010 record Lazarus – a debut LP that would, in fact, become McCoy’s last full-length for over a decade. Features and popular singles have appeared since then, but Never Slept Better is Travie McCoy returning victorious and at full capacity to delight our ears with singlehandedly crafted, infectious tunes that definitely match – and I would argue surpass – the historically popular output he helped create with GCH. The album’s title is a reference to The Most Dangerous Game by Richard Connell. It’s a narrative in which (spoiler alert) the central protagonist is triumphant in the end, and couldn’t be more fitting to McCoy’s current situation.

You see, not only is McCoy rightfully enjoying the rewards of years of hard toil and tribulation, but right off the bat, the crucial components of a winning record are here – the rhymes and rhythms preceded by a narrated introduction that sets the scene amidst atmospheric pads. Then, as “Stop It” jumps in, it becomes readily apparent that the Travie McCoy you may have read about or been expecting has been completely rebuilt and refined. His reflections and intention are clear, and the implementation comes full force: ‘Past years, it was all about my girlfriend/Last year, I was caught up in the whirlwinds/This year, I’ma change all that‘. And boy, does he mean it.

“Stop It” carries soulful keys and an endearing lyricism that sits crisply in the mix. Across the record, each of McCoy’s uttered syllables are enunciated and energetically delivered. They jauntily drive us forward, never struggling for attention but rather finely woven into the instrumentals throughout the album. It’s a good thing, too; the majority of Never Slept Better revolves around relationship – to others as much as to oneself – but the mature frankness of McCoy’s penmanship is supported by uplifting musical backing and splashes of wit and humour. The record is even populated with a few interludes that offer light-hearted anecdotal moments. They are brief, but even here you’ll find evidence of McCoy’s imaginative verbosity.

“Loved Me Back To Life” brings disco funk to the foreground in an amorous track that is utterly danceworthy and overflowing with good vibes. Powered by warm keys, a simplistic guitar riff punctuates the copious electronic flourishes, conjuring whimsy and charm. It’s far from the only track to possess upbeat tones, although Travie McCoy does a stellar job of utilising such optimistic instrumentation to backdrop what might otherwise be difficult prose to swallow. Just take “Down and Out in L.A.”, where McCoy admits:

‘C’mon Usain who?
I’ve been bolting from my problems since the age of 22
Dodging responsibilities like no thank you
Sorry man I’m on some other
While my fam was thinking
‘Damn why can’t he be more like his brother?’‘

Later on, “A Spoonful of Cinnamon” offers another laid-back number, relying primarily on a bassline to propel its relaxed bars before giving way to the contemplative, cheerful chill of “Another Round”, wherein McCoy’s cadenced lyrics are sung rather than said. Tuneful and pondering, it’s a vibe that spills over into “Full Monarch”, although the melodies on the latter take a backseat as the artist’s familiar, punchy flow returns to the foreground.

It’s not all fun and games, however. Despite the aforementioned tonal tendencies, the drums that pilot “Déjà Fait” do little to prepare you for the striking bars and poignant piano that lie in wait, demonstrating impressive introspection again as McCoy calls out to those who ‘…say they skipped school but they never missed Gym Class‘. For those who crave or miss GCH‘s signature sounds, the likes of “Best Part of Revenge” and “Broken Barometer Blues” will surely help scratch that itch.

Moreover, while I adore the juxtaposition of the lightened instrumentals and weighty lyrical matter, there are countless highlights found in the more serious tracks. “I Am Pagliacci” is captivating – its title inspired by a 19th century Italian opera. Cataloguing an ongoing war with self-image, it brings the endearing and creative lyrical honesty McCoy displays throughout Never Slept Better to a thoroughly relatable peak (‘When every morning’s like stepping on a bunch of loose Legos/Nothing sentimental when your own body feels like a rental‘) with reverberating piano and a toe-tapping beat laden with hi-hat. I’m also compelled to mention “The Bridge”, which offers up lo-fi-esque rhythms to complement the beautifully sopranic accompaniment of featured guest Elohim in the chorus. It’s mildly haunting, blissfully mellow, and a standout song for sure – tied for favourite with the equally commanding and pensive closing track.

Travie McCoy has every right to enjoy great success with Never Slept Better. His latest album is a fine feast of beats, bars, and the intense battle towards betterment and healing of oneself in the wake of turmoil. McCoy refused to give in despite coming close – a fact documented with attitude and aplomb across the album – and the result is a resolute record forged from hard work and hardship. His last album may have been titled Lazarus, but Never Slept Better proves that Travie McCoy has returned to us more alive than ever before.