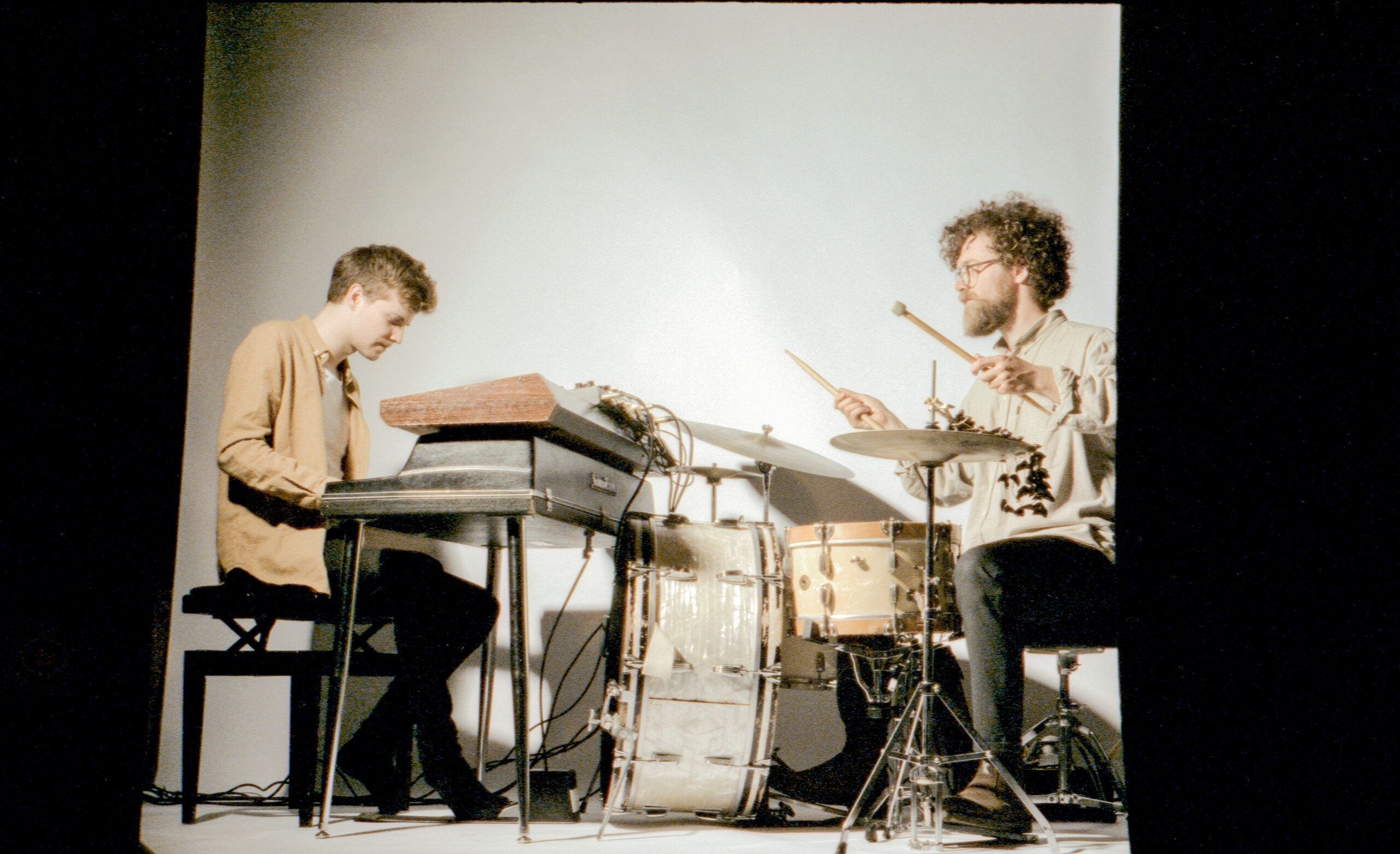 By Dominik BöhmerNovember 1, 2022 No Comments

Svaneborg Kardyb effortlessly cleared my lofty expectations for Over Tage like seasoned pole vaulters. What an album.

Danish modern jazz duo Svaneborg Kardyb have been making a lot of waves throughout the music industry ever since their NPR Tiny Desk session was released back in May. I’ve seen it, you’ve seen it, hell, your grandma’s probably seen it. For those of you who haven’t caught it for whatever reason, I’ll embed it down below. I’ll even wait for you to finish watching it. Go on, then.

That was great, wasn’t it? Don’t say I didn’t tell you so. I can’t decide what’s cozier: their music or the living room they played it in. The mixture of sounds and visuals really made this session stand out for me, and it now rests comfortably among my favorites from that series.

Svaneborg Kardyb is the musical partnership of Nikolaj Svaneborg (piano, synthesizer, Wurlitzer) and Jonas Kardyb (drums, percussion). After independently releasing two records – Knob in 2019 and Haven in 2020 – and winning the Danish jazz equivalent of a Grammy in two categories, Over Tage (‘above the roofs’) is their first record for English modern jazz label Gondwana Records, which most of you will undoubtedly associate with groundbreaking artists such as Portico Quartet, Matthew Halsall, Mammal Hands, or Hania Rani.

Combining their different backgrounds (Svaneborg coming from the Scandinavian jazz tradition and Kardyb from blues and folk music) into a fleet-footed, spellbinding sound, Over Tage is an exploration of Danish folk motifs and Nordic jazz, while incorporating subtle influences of electronic and contemporary classical music as well. Theirs is a sound that’s intricate but light as a feather, pillowy enough for you to let yourself fall into, eyes closed, completely in the moment.

‘We started in the earliest of mornings over the blackest of coffee, sometimes even without talking, just music. Immediately we felt a connection between our personal style of playing and the compositions emerged like out of nowhere.’ This intuitive interplay between our two protagonists can be felt in every song on the record, their differences in musical upbringing falling to the wayside to let their ideas fall into the fertile soil of their shared imagination. It’s not hard to imagine them jamming out these songs, completely in tune with each other as the music simply flows from their fingertips.

Besides the main duo of Svaneborg Kardyb, you can hear three other musicians at various points of Over Tage, namely guitarist Sune Pors and trumpeters Jakob Sørensen and Jonas Scheffler. One such instance where you can actually hear all of them on one track is “Fragt” (‘freight’, close to the German ‘Fracht’), where their presence humbly accentuates the background ambiance without distracting from the chemistry of Svaneborg and Kardyb. The following “Orbit”, which we’ve heard in a slightly stripped-back version on the aforementioned Tiny Desk, also benefits from their talents, supplementing what we already knew of the song’s core dynamic with new impulses.

It feels strangely sacrilegious for me to have a single favorite element on a record where everything flows into each other so beautifully, but I have to single out Kardyb’s drum work all the same. From the almost comically large kick drum (which sounds incredible) to his assortment of little percussive knick-knacks, his versatile yet meditative approach perfectly underscores the somnambulant melodies Svaneborg weaves all across Over Tage. My favorite drumming moment would be “Orkaner” (‘hurricanes’), where Kardyb places perfectly punctuating cymbal hits, bells, and side clicks into his patterns, building a bustling beat for the keys to blow over like a gust of wind.

“Ubemærket” (‘unnoticed’, also close to the German ‘unbemerkt’) supposedly ‘materialized itself into a quiet and shy being sitting in the corner of the room’, and indeed it sounds like a benevolent creature timidly lingering in the corner of your eye, just sharing your vibes. Warmly enveloping synths meet understated percussion – stunning track. The closing title track then transports us above the roofs, levitating towards the peach-colored clouds at dusk. I love the little motif Svaneborg lays down that marks the song’s second half, especially set against Kardyb’s calmly energetic drumming.

Jazz, especially of the (Northern) European variety, has a special place reserved in my heart; this commitment comes with a certain set of expectations, though. Admittedly, I was prepared for Over Tage being great, but what it turned out to be is so much more than I had envisioned. Svaneborg Kardyb were able to take my hype, settle it down, and turn it into a relaxed but genuine appreciation for their mellow vibes and outstanding musicianship. What’s more, they made it all sound effortless, as though this music simply poured forth from their hearts and minds like water from a clear mountain spring. Exceptional, utterly exceptional.