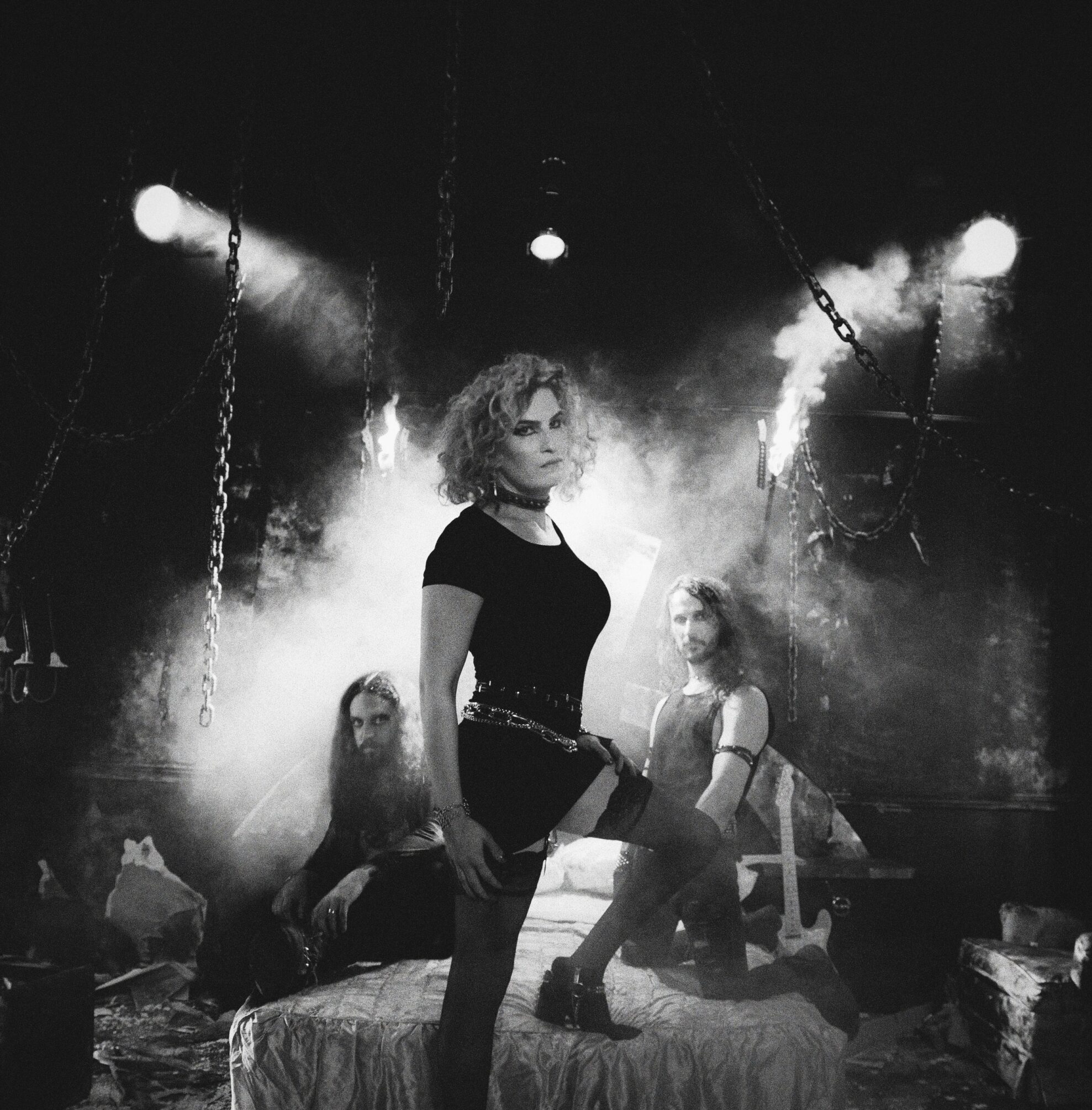 By David RodriguezOctober 22, 2022 No Comments

Sonja arrive loudly on the scene with their attention-wresting heavy metal, reimagining its tenets as darkly feminine ordeals of endurance, sex, and power.

I think we as big-time music enjoyers (I mean this in terms of nerdiness and devotion more than anything else) underestimate the power of the Vibe™. Music doesn’t always have to push an envelope, have the best and most forward-thinking writing, or possess any other sort of hook to be enjoyable and worth your time. Sonja are exactly for the Vibers™, but it also has a great point. And look, anything I’ve said up to now shouldn’t be viewed as pre-emptive criticism or concessions that are needed in order to like what the trio’s doing – Sonja are doing great things and are highly likable if you can just… relax a bit and have fun.

Sonja are made up of Melissa Moore (vox/guitar, formerly of Absu), Grzesiek Czapla (drums, also of Timelost), and Ben Brand (bass and synths, ex-Tombs) – that sort of pedigree gets wilder to think about when you first hear “Nylon Nights”, a veritable viber of a track with much ado, with heavy metal and some gothic rock tones. It’s dark, foggy, and sleazy in the best way possible, like a possibly-not-up-to-code sex nightclub or something.

Maybe that’s a matter of perception though, or even a misuse of my own vocabulary. What I’m sure of is that there’s an air of debauchery to it all, a marked defiance of decency and norms, and an embracing of the macabre and primal, just not quite in a way you might think. An example that might immediately contradict my point is “Moans from the Chapel”, which is a song quite literally about a woman having sex one last time with her lover. Who’s in a coffin. Dead. Necrophilia. It’s about necrophilia. It’s shocking I suppose, and yet it’s also conveyed in a way that’s emotional and endearing, conveying a sense of longing and desire to its illogical conclusion. It’s passion to the nth level, however icky it is when you think about it for too long. Whatever, it’s art.

There’s also an aspect of power here. Loud Arriver is a collection of specific expressions, celebrating strength, standing as an affront to authority and death itself. It’s much like the archetypal femme fatale – a soft, curvy figure in thigh-high nylons with a garter belt, lace undergarments, short clothing over them, and so on, but there’s a knife in their boot and a snub-nose in the pocket of their midriff-baring, jet black leather jacket. Underestimate them and you’re laying in a street gutter for some pigs to find later on. More literally, it’s a moment for Moore to (re)establish a sense of self, safety, and space in a world that hardly ever affords trans women those things.

Pretty much every song on Loud Arriver exhibits this to a degree or from a certain angle. “Nylon Nights”, the album’s stellar lead single, is swollen with infectious verses and electrifying guitar work, lyrics about wearing your sluttiest outfit possible, and the scene of an unforgettable night as a backdrop (if the video’s any indication, this isn’t exactly in a positive manner). “Wanting Me Dead” is an urgent track about living life with a target on your back and fighting against would-be assailants before they get their way.

“When the Candle Burns Low…” and “Pink Fog” see Sonja commune with witches as they are hunted, an apt comparison. The former track has a nice gallop to the bass as it builds up to the chorus; a fiery opener for sure. The latter is suspenseful and vast, really taking the time to tell a story of uncontainable might with neat, reverb-laden atmosphere. One of my favorites though is “Fuck, Then Die”, a song that has its priorities straight for when the world is ending.

Everything about Loud Arriver is anthemic and demanding of your attention. There’s not a single weak track among its eight total, each is endlessly singable, and Sonja do all they can to win your heart – and succeed. They captivate in ways that other bands can’t. The skill and spirit among the members speak for themselves. Moore’s singing is dazzling, her fretwork exemplary of the catchiness/heaviness combo that heavy metal was built on; Czapla’s drumming is fierce and commanding, tempos conjured as easily as words from lips; and Brand’s bass is lovingly handled in the mix and adds a level of groove that can be sorely missing from ass-beating music like this. In other words, it’s the full package, and then some.

Heavy metal used to be a very masculine, unwelcoming culture for a lot of people – still is in some ways. Seeing Sonja do what they do in the ways they are is refreshing, not to ignore the many others that have predated them and won those hard battles of belonging and representation. It’s like how Biff Tannen hid a naughty Ooh La La magazine in the cover of Grays Sports Almanac in Back to the Future Part II. Behind the tougher exterior of the music is a take on sex, perseverance, and feminine power rooted in the arcane and personal lived experience alike. Sonja are a Trojan horse of magic, cigarette smoke, stripper heels, hope, and resistance. It’s good. It’s fun. It’s a Vibe™. It’s some of my absolute favorite kind of music.