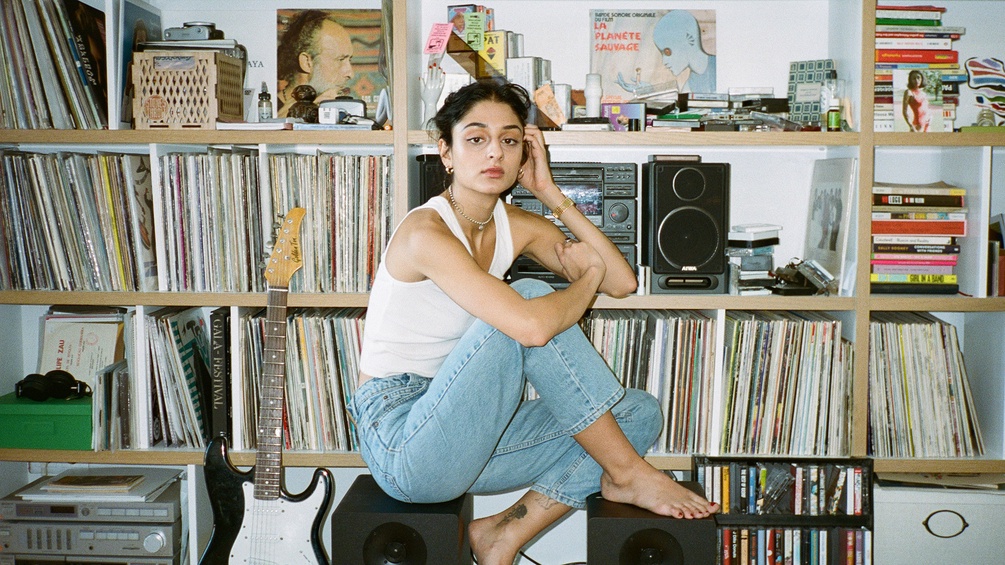 Cult Survivor is Vienna artist Sofie‘s debut indie pop album. Balancing bright synth sounds with her mellow voice, she is able to create simple ballads that are pleasing to the ear.

Sofie Fatouretchi, known as Sofie, is a young artist from Vienna. Her debut album, Cult Survivor, is a collection of mellow indie pop songs. Sofie’s singing is backed by simple instrumentation and seems to float in a dream-like setting. She did not write each song with the purpose of creating an album, but eventually had enough material for what has become Cult Survivor. Being a multi-disciplinary artist, Sofie is constantly creating. She is a classical violinist, painter, and DJ, amongst many other things like the radio show she hosts on NTS of London. Having many different creative outlets, she is constantly able to experiment, which is evident in Cult Survivor.

The album as a whole is quite simple, featuring synths and a bright guitar. She adds soft harmonies at times, which caress her alto voice. The vocal production muddles her voice throughout the album and adds to the dream-like sound. Sofie has stated that does not consider herself a singer, which may be cause for the heavy production on her vocals. Her melodies all seem similar and periodically seem to lag on, but give room for the lyrics to breathe. She experiments with a spoken verse in “Baby” and succeeds in creating a song that stands out. It differs from the rest of the album and is a nice change-up in the middle of Cult Survivor. Although she is not a trained singer, Sofie‘s vocals are the highlight of the album, standing out the most when she adds slightly clashing harmonies.

Sofie released five singles before the album, creating lots of anticipation. The final single, “Guest”, is one of the longer tracks and features heavier synth and a vibraphone sound. She writes lyrics that are descriptive and ambiguous, letting the listener create their own images to go along with the stories she is telling.

‘I’m always falling for the wrong body,
Those not comfortable near mine.
A hundred of us sway or sigh,
In the air that is too cool.
I wanna say to you dear heart,
Wanna breathe in this world that’s falling apart.
I am too old to learn your name in any other language,
I am on road almost there, but not home.’

The single includes a creative music video with the lyrics running across the bottom of the screen. The lyrics often blend into the picture which makes them difficult to read at times, but is one of the artistic choices that makes the video stand out. It is influenced by ’80s-style production and looks similar to an old VHS tape. It is visually pleasing and creates an accurate atmosphere for the song to float through.

The second last track on the album is called “Interlude” and is a fifty-three–second dedication to something that sounds like the tuning of a pipe organ. Although it does not fit in with the rest of the album, it demonstrates Sofie’s fearlessly creative mind. She did not sacrifice her vision for audience interest, which is admirable. She includes “Interlude” at the end of the music video for “Guest”, but chose not to tell anyone that it is its own track during the release of the single.

The album ends with a dance track called “Happen 2 B There”. The upbeat track is a great addition and works well with Sofie‘s sound. It has her own flare and demonstrates her musical ear with more weaving parts that usual. The track has a thirty-second synth outro that finishes Cult Survivor nicely and ties the project together.  Throughout the album, Sofie uses synths to add colour and create melodies, letting her voice stay somewhat monotone. I find her simple voice soothing and nostalgic, specifically when she embraces her full lower range. She is able to produce a ’60s pop ballad sound on tracks such as “Hollywood Walk of Fame” and “Georgia Waves” which works well with her voice, and are enjoyable to listen to.

Cult Survivor paints a picture of the bold and diverse artist Sofie is. She is not afraid to step outside the guidelines of pop music and construct new ideas for listeners. The album involves lots of twists and turns that are a nice contrast to the simplicity of her songs. I think she has curated a specific sound that branches out enough to add lots of intrigue, but keeps the majority of pop music listeners interested. Her alto voice is matched with glowing synth and trades off melodies throughout. This album lays a solid foundation for her music career and creates lots of opportunities for her to build off of with her sound and artistic style.