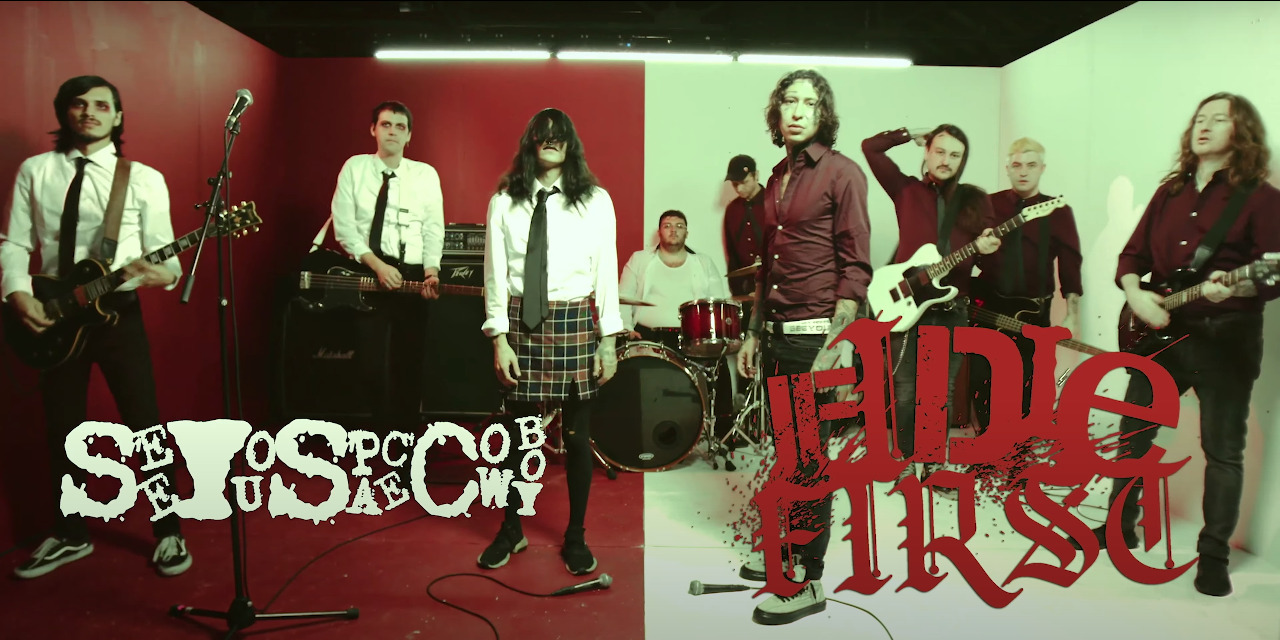 SeeYouSpaceCowboy and If I Die First’s first ever collaboration, A Sure Disaster, results in a split EP that delivers a medley of fun and energetic vibes, bringing a mixture of 1990s and 2000s metalcore with elements of mathcore and catchy emo/post-hardcore traits that we can all reminisce on.

It’s been a while now since we’ve seen that mix of emo and metalcore from the late 1990s/early 2000s really hit the big time; since then, the genre has gone through a wave of changes. Taking things from that 2010s Myspace era with artists such as Woe, Is Me and Attack Attack to going full circle with bands such as Code Orange and Knocked Loose who look to be taking metalcore back to its hardcore-infused roots. Whatever you may remember about the genre’s infamous rise to power, metalcore now seems to be at a point in which it has become nostalgic and sentimental for the many who grew up listening to it. With this nostalgic embrace, a call for artists has been much needed to project metalcore towards a new generation of listeners – that’s where SeeYouSpaceCowboy and If I Die First take centre stage, and they have proven themselves with A Sure Disaster.

The split consists of five pumping tracks, with the first two by SeeYouSpaceCowboy whilst If I Die First take over for tracks four and five. However, before getting into the individual efforts by both bands, the EP’s third track “bloodstainedeyes”, which sees a collaboration by both artists, is very much the central track that seems to showcase what A Sure Disaster is all about. There is a handful of subtle references even as the song begins; the drums encompass a somewhat 90s metalcore feel through their production (similar maybe to Bleeding Through), whilst the dissonance from the guitar riffs demonstrates the more mathcore-esque side of things. The vocal duos between Connie Sgarbossa and Lil Lotus are another strong addition, in which the interplay between the clean and unclean vocal lines match up creates both a raspy yet sweet feeling. This is particularly notable two thirds into the song, where what seems like a softly imbued outro takes place. The vocal harmonies have a distinctive poetic feel that could easily be featured on one of those classic 2000s post-hardcore era records like Underoath’s Define the Great Line or Poison the Well’s The Tropic Rot.

The first song on A Sure Disaster begins a trend of implementing poetic, emotionally themed lyrical titles with “Painting a Clear Picture from an Unreliable Narrator”. There is a certain mathcore feel about this opener, particularly in the verses where the guitars encompass various dissonant, panicked chords with an almost Dillinger-like quality to them. The choruses, then, take on a more emo, pop-oriented direction, allowing SeeYouSpaceCowboy to promote that trademark ‘sasscore’ style with clean vocal hooks and damaging breakdowns that spill over into the latter of the band’s sole tracks “Modernizing the Myth of Sisyphus”. The lyrics further encompass that early 90s emo-screamo interpretation, with lines such as ‘from thoughts of redemption and choking on words that just fall apart’ and ‘favour no solution aim for the same conclusion’ that could even be argued to reference the lyrical themes found in that of Saetia or Off Minor perhaps.

Once we’re past the record’s mid-point, the final two tracks then introduce If I Die First to deliver their contribution on this emotionally nostalgic thrill ride of a split. The first of the two songs, “Mirror, Mirror This Is Nothing Like You Promised”, features a heavy build-up that promises to be intense through the layered use of breakdowns, and genuinely expressive vocal sections that emphasise the heartfelt articulation of bands like Glassjaw with the heavy technicality one may explore in the early mathcore sounds of Botch. “My Nightmares Would Do Numbers as Horror Movies” soon follows this opening with electronically infused rhythmic sections and ambient guitar riffs, which are nicely implemented. The vocals continue to encapsulate a strong emo vibe that becomes familiarly indictive of Senses Fail, but with the articulation leaning more towards that of Thrice’s The Illusion of Safety. Lyrically, If I Die First also demonstrate a poetic and emotionally expressive feat similar to that of their collaborators. For example, the line ‘a silhouettes all that’s left of a flame that flickers out shadows dance’ conveys the same philosophical emo interpretation of those early Washington DC bands like Rites of Spring, who paved the way for this kind of expression and sound.

There is something genuinely authentic and natural about A Sure Disaster, even with the countless throwbacks to many classic metalcore, screamo, post-hardcore and emotional hardcore bands of the past 20 years. Both SeeYouSpaceCowboy and If I Die First are successful in highlighting these old school vibes, avoiding the risk of becoming stale. There is also something interesting happening in the modern world of metalcore with its constant collaboration with emo rap and other accompanying subgenres, where both artists are leading the way in elevating this style of music onto a new platform for a new set of fans to discover whilst subsequently going back and listening to the countless others who have greatly inspired this modern reworking of metalcore nostalgia.