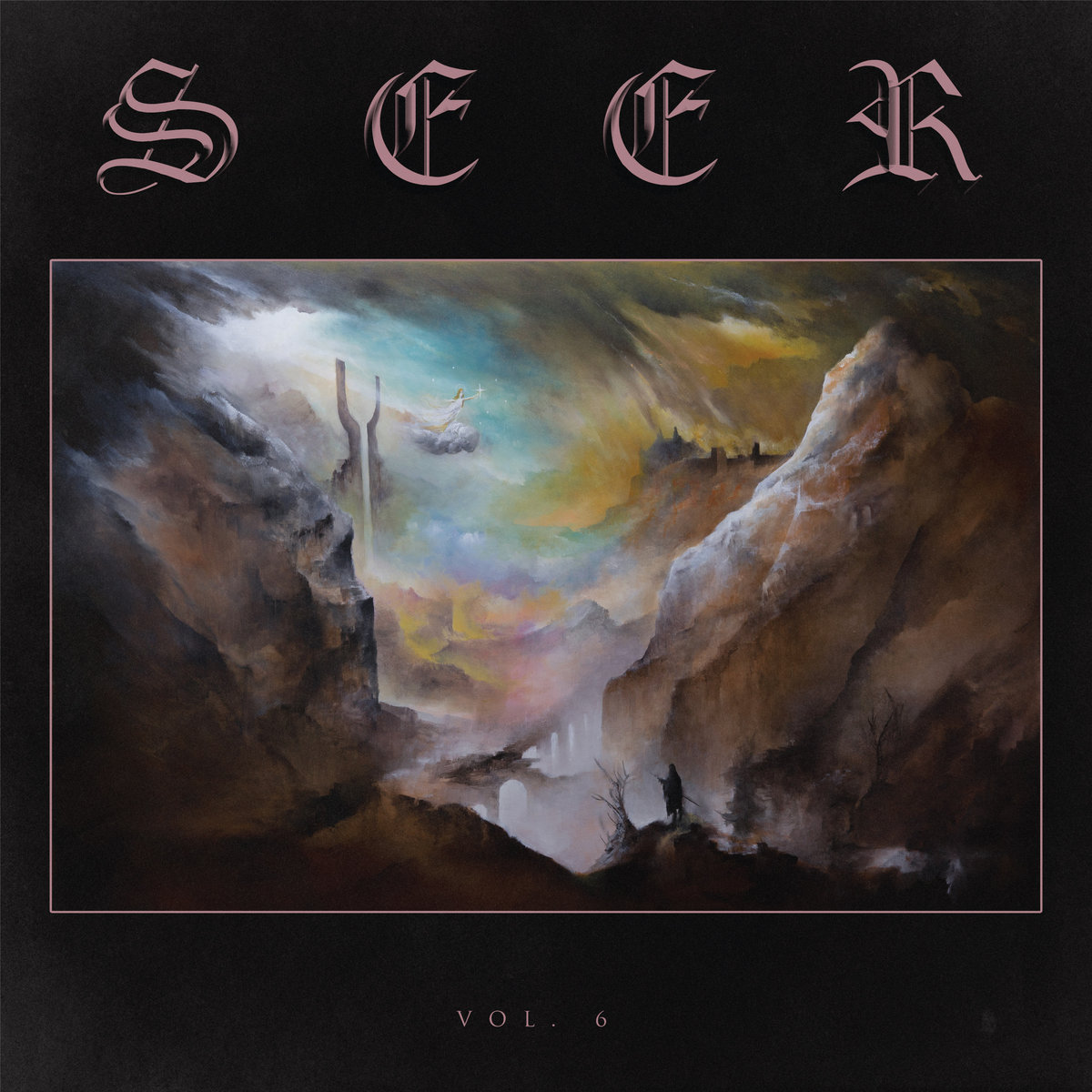 By David RodriguezMarch 7, 2019 No Comments

Seer are equally concerned with furthering their own original story and making great music to support it. Vol. 6 sees them succeed on both fronts with catchy, deep, and expansive doom metal.

Somewhere between URSA and Bell Witch exists a space in doom metal where we get both melodic catchiness and the vastness of the natural world (or perhaps a realm akin to the natural world). The best of both worlds, so to speak. Seer is profoundly, almost stubbornly, in that middle ground. As if on rails, the Vancouver five-piece are quite capable of riding in one direction on the tracks of doom, then speed in the other direction on the next. It makes for a diverse and interesting album in Vol. 6, their fifth offering (Vol. III & IV were one album) and second LP so far.

It’s not that Seer can’t decide what they want to be here – there’s enough binding threads to make Vol. 6 more than cohesive – but their tendency to not stick in one place terribly long created some interesting reactions to this album. I found myself wanting more of various parts of their compositions, only for it to shift into something different short after. This led me to ask myself one question that would guide the tone of this review: did I get enough of what all Seer had to offer, or were they a tease? The short answer is, yes, I did get enough. Really, it comes down to if I want more of a particular thing, I can simply listen to another band that relates to those desires a bit more consistently instead of the luscious middle ground that Seer inhabit.

The first part that really stood out to me in this regard was the instrumental break after the first verse in “Iron Worth Striking”. It dips pretty deep into the sludge muck for a thicker, dirtier guitar sound than usual. The instrumentation rumbles low, but that heaviness doesn’t betray the catchiness on display. There’s also a vocal ‘ooh!’ and ‘ah!’ that chant in the background every other bar, which is a little endearing. This song embodies a lot of the melodic structure that they use, but I think the best example of that structure is “Seven Stars, Seven Stones”. This track makes the most of the band’s skill set: entertaining progressions, melody, and a grandiose epic feel, something that comes to define Vol. 6.

Ultimately, Vol. 6 is unequivocally epic doom delivered a number of ways, not the least of which are the fantastical lyrics (Seer‘s works all build upon the same story and lore, hence sequential numbering in their projects). Just take a look at this verse from “Iron Worth Striking”, which reads like dialogue from a Tolkien novel:

The vocals are also quite appropriate for the epic tone of the music and lyrics. The clean vocals are vast and projecting, aptly filling all the space allotted to them. The harsh vocals are beastly, screeched cries that are nigh indecipherable, even with the help of a lyric sheet. With this music telling a story with characters and plot devices, it’s like you’re really listening to different beings converse with the variance in vocals.

With that, though, we also get a supremely cavernous feel. These songs sound like they were recorded, produced, mixed, mastered, and distributed from a cave deep in a mountain. Atmosphere may take a slight backseat to the catchy and melodic meat of Vol. 6, but it still accounts for a lot of my favorite moments in the album. There’s an interlude separating “Seven Stars, Seven Stones” and “Frost Tulpa” with barking hounds in the distance and whistling wind. It’s a great lead into the latter track, which is more progressive and psychedelic in structure than the rest of the album. The intro track “Oath of Exile”, referenced in the lyrics earlier, is a delightful beginning to the whole album, with tinny chimes sounding off up front, wind in the back, and deep hums of bass below it all. You can practically see yourself on the frostbitten foothills of a region lost to time, overlooking the seemingly limitless expanse of land before you. A large eagle companion is perched on your shoulder. His name is Ra.

Vol. 6 is a story, a gaping wide mythos rife for exploration, especially considering the relevant backlog. Even with this being my entry point into the band, I felt motivated to dig into the lyrics and attempt to decipher what was going on. The music here has a legendarily fantastic feel to it, and the energy it brings is infectious. In the end, I don’t fault the band for operating in that pesky middle ground I’ve referenced a few times, because they took command over it to give listeners a diverse doom experience that both pummels and delights. This is one sequel you can jump in with and still enjoy it for what it is.