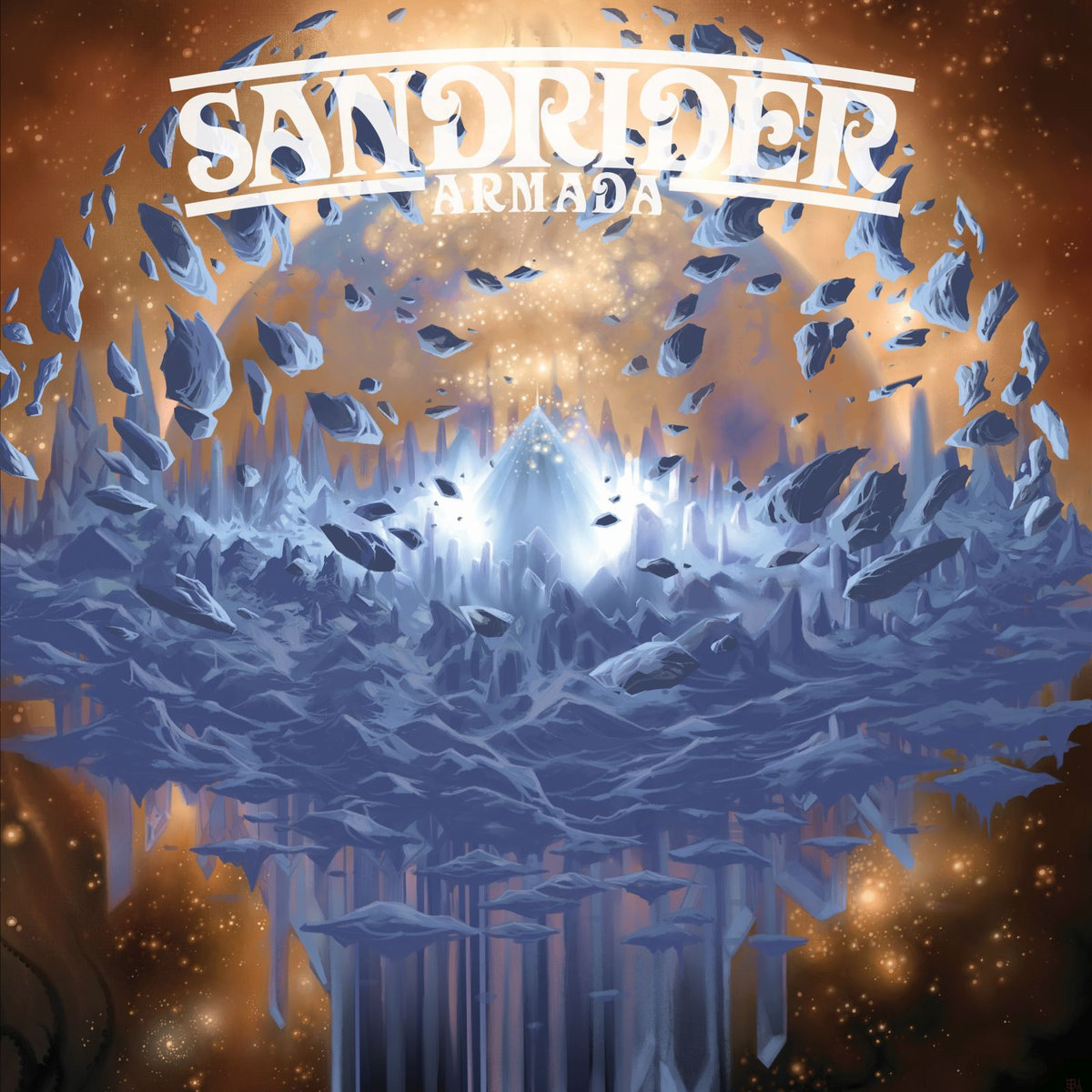 By David RodriguezAugust 16, 2018 No Comments

Sandrider are one of the best stoner rock bands out right now and the Seattle trio make that apparent with their best album yet, Armada.

Self-described ‘best band in the universe‘ Sandrider are one of my favorite acts out right now. Three albums (and a split with Kinski) deep into their career, they’ve grown and evolved their deserty, stoner rock sound into something truly monolithic. The Seattle trio now deliver Armada to us, a ten-track adrenaline injection of an album that is pretty much everything I expected from the band and more.

Sandrider have always been supremely energetic and this album is no exception. Their music sounds like an adventure with a healthy sense of daring and danger. The guitar focuses heavily on melody, with a moderately clean tone for the genre. The drums are a vibrant powerhouse that propel each song forward like liberally applied injections of turbo. And the vocals? Oh man. They have always been placed well in the back of each song, but that’s the comfort zone for them. The singer sustains yells at registers I find hard to believe. If the vocals were any further up in the mix, it would likely drown out the rest of the track. The trade off to this is that the lyrics are a little hard to hear, but coming to Sandrider for a coherent storytelling experience is a losing move. You come to rock the hell out; you come for the serotonin rush.

Front and center on Armada, you get “Hollowed”, which is an exemplary song for the band’s style. It’s one of the longest tracks on the album and comes out of the gate at full speed, a far cry from “Ruiner”, which opened their previous LP Godhead and progressed from 0 to 60 over the course of a couple minutes. No, “Hollowed” pins the gas pedal down with a cinder block and stampedes forth with rugged percussion, soaring vocals, and dynamic guitars that flirt with sludgy tones and anthemic rock riffing.

One of Sandrider‘s many strong suits is their penchant for catchiness. “Creep” is a wildly fun track in this regard, from the erupting intro to the song’s backend that slows things down ever so slightly for a deliberate, melodic ending. “Banger” is true to its name; it has a very palatable approach with groovy riffing and the cleanest vocals on the album. I could see this getting played on the radio. The title track is an immensely intense song with everyone playing at one-hundred percent. It’s the perfect song for a drive down a highway with friends.

Wholesale aggression is something that the band doesn’t regularly indulge in. Despite strong, commanding vocals, there’s not much along the lines of aggression you would associate with metal, but “Brambles” flips the script a bit and is appropriately prickly in its presentation. The vocals throughout the track are low bellows, something I would expect out of darker sounds, like doom or death metal. Harmonies are built with cleaner vocals tones for the chorus and it’s beautiful. “AAApe” is pretty aggressive in its approach as well. It has a vaguely menacing and suspenseful guitar melody and consistently peak-high yelled vocals.

I caught myself; I’m trying to talk about nearly every song again. Can you blame me? So much of this album is just unmitigated fun. You can tell the trio had a ball making these songs, and that same energy shows both in the songs themselves and how infectious it is to listeners. Sandrider have been getting better with each release and, as such, this is their most powerful outing yet. I tend to have a wide smile on my face when listening to this album; music that brings this much joy to me is pretty rare. The only ‘meh’ part I could even think of is “Industry”; it’s a fine song, but much of what the song tries is done better elsewhere. I do like the transition from this song to “Creep”, though.

Armada shows a band that’s always been good growing into something even greater. The songs are tighter, the performances filled with more vigor, and less time is wasted or at least capitalized on better. I absolutely love Sandrider‘s progression and can’t wait to see what they do next, even if it takes another five years. This is fast-paced stoner rock that should be relatively accessible to most people. So, please, I implore you to give it a try, because as it stands, this is one of my favorite albums of the year. It’s music like this that truly fuel my passion for the art form. I love this so much.