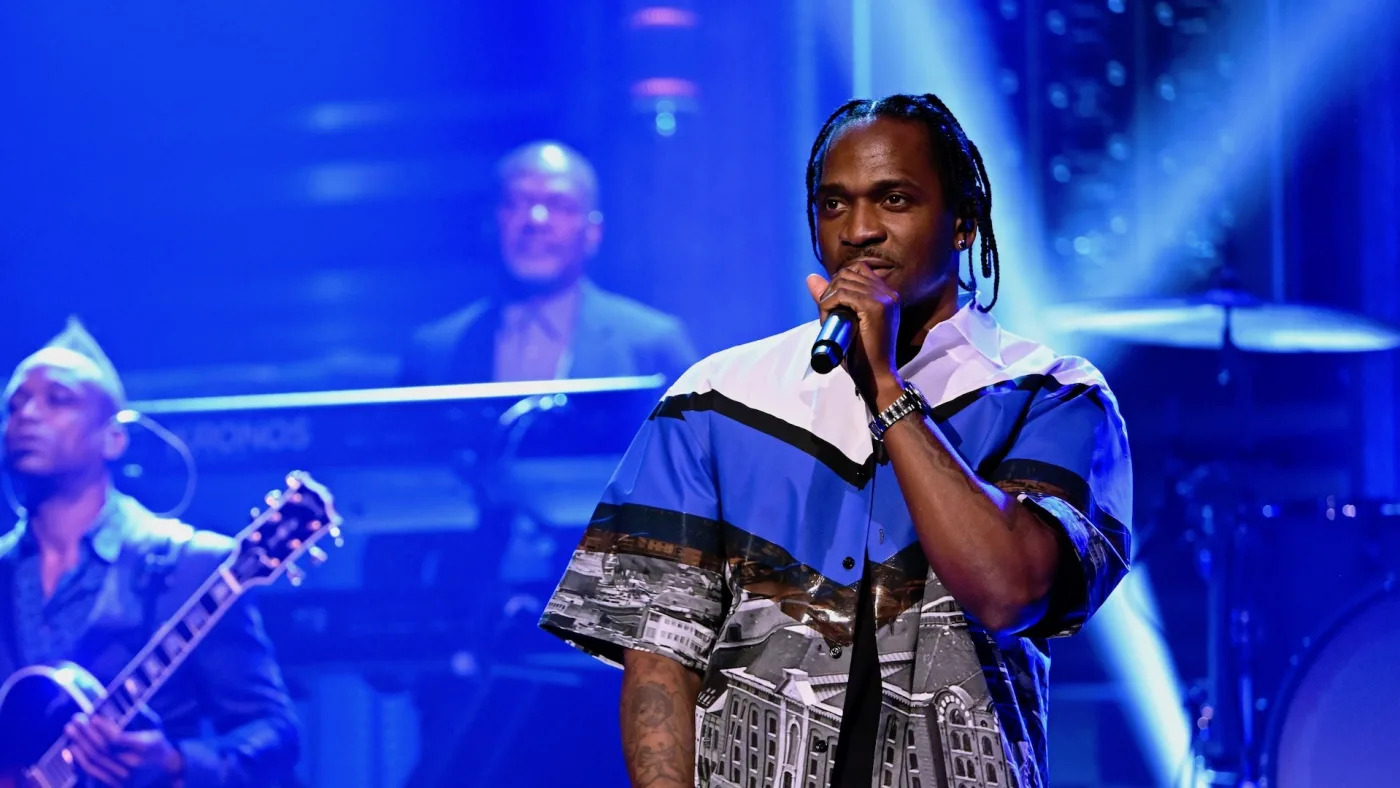 By David RodriguezMay 3, 2022 No Comments

The work may be almost dry, but Pusha T proves his lyrical ability and charisma is anything but as he delves even further into his drug-dealing past on It’s Almost Dry.

Pusha T gets flak from some rap fans for being too stubborn. ‘He only raps about coke’, they say. Many wouldn’t challenge his classic status – he’s been doing this for almost three decades, starting with his older brother (No) Malice in the Virginia duo Clipse – but yes, his themes have been locked in since about that time due to that being his reality. He sold drugs with his brother as a teen to get by before pivoting to rap as a career, a path we hear about often in the game to build a better life.

For me, Push has been one of my favorite rappers during his solo career since Fear of God II: Let Us Pray, consistently improving, choosing great beats to rap over, and finding new, fresh ways to bend his coke-focused lyricism. He also lyrically assassinated the shit out of Drake a few years ago with one of the most calculated diss tracks of all time, which earned him great favor in my eyes. It also helps he’s gained a new level of prestige from being the president of Kanye West’s GOOD Music label imprint since 2015. Since then, he’s taken on a bit of a mogul persona, but never left the drug game behind and why would he? He’s made a name for himself with it and that loyalty and legacy will go to the grave with him whether he likes it or not.

For It’s Almost Dry, one of my most anticipated albums for years, King Push hasn’t missed a step. I imagine, at this point, coke rap is like riding a bike for the dude. Two big names assist in making this album as grandiose as it is. First is Pharrell Williams, who produces half of the album’s 12 tracks. Pharrell goes back hella far with Push and Clipse as he produced a lion’s share of their albums with Chad Hugo as The Neptunes. I’ve always loved his production and it’s in peak form here, as we’ll get into. The second is, of course, Kanye West doing business as Ye now, a very polarizing figure in hip-hop, and he continues to make it as hard as humanly possible to be a fan of his (literally google any-fucking-thing involving his estranged wife Kim Kardashian and her new partner Pete Davidson to see why). I like his production too, at least some of it, in spite of his abhorrent behavior, but I’m far past the point of being able to comfortably support him as an artist until things change. Good thing then, as his production here is definitely the weaker of the two with some highlights I’ll cover.

Leading off with a Pharrell cut, “Brambleton” is an eerie, trippy track with some nice-ass rhyming and storytelling that references his earlier years in Virginia, one-time Clipse manager Anthony ‘Geezy’ Gonzales, and the feeling of betrayal felt by him working with cops to keep his family safe, particularly after a tell-all interview with VladTV in 2020 (you’ll never convince me that DJ Vlad isn’t the feds). In other words, very real shit, and you get the impression that while Push has moved on, perhaps even forgiven those transgressions, he has not forgotten. The end of the first verse is particularly poignant:

‘You and I, we were different like the two got mixed
Buyin’ biggies, but was ridin’ on some 2Pac shit
We was both hurt when we see how Q dropped Bish’
Said we knew the ledge better, we thе new plot twist
Who knew your face bеin’ all across the news outlets
Would mean forever I would never talk to you ’bout shit?’

The next song, another Pharrell-led joint, is the best song on the album. “Let The Smokers Shine The Coupes” has S-tier lyricism and production, the knocking bass drum lining up with Push’s vocals to give it all more punch without drowning him out. The stuttered choir sample mixed with the piano in the space before the second verse gives it a regal feel while still feeling hard as hell. On the hook is one of the most quotable lines of the whole album, ‘I got ’em, baby, I’m Jim Perdue/Cocaine’s Dr. Seuss‘, which is a wild truth unto itself with how sharp his rhymes can be.

Ye is up next with “Dreamin Of The Past” which uses a sample of Donny Hathaway‘s cover of John Lennon‘s “Jealous Guy”. It’s a powerful sample that threatens to overtake Push, but his unique cadence holds strong as he gets reminiscent with some choice bars like ‘My weight keepin’ ni**as on the bikes like Amblin‘ and ‘You hollerin’ ‘top five‘, I only see top me/Award shows the only way you bitches could rob me‘. Another Ye beat on “Just So You Remember” fares better – a sample of Colonel Bagshot‘s “Six Day War” is a bit more understated and breathes more for Pusha T to get fierce against his competition on:

‘Millionaires were made out of middlemen
That hole in the attic was not for a ceiling fan
Army Celine, the wardrobe is militant
And army fatigue when I talk pyramids
Just so you remember who you dealin’ with
The purest snow, we sellin’ white privilege
Designer drugs will turn ni**as limitless
Designer clothes, these hoes losing innocence
The book of blow, just know I’m the Genesis‘

When Push says ‘just so you remember who you dealin’ with‘ in the middle of his verses like above, you can hear that he’s rapping through gritted teeth, a scolding tone so you never forget who the king is that sticks with you for quite a while after. A much shorter second verse proves to be just as impactful and shows that, no matter how far and deep Pusha T gets in the rap game, he wouldn’t be there without the dope game: ‘The needle is sharp, but they ain’t shootin’ insulin/You missing the point, these drums ain’t Timbaland‘s‘. I’ll shout out “Call My Bluff” as well, which is a savage track where Push really flexes those drug lord muscles in a way that oozes dominance and power rarely seen by him on this level – another favorite track of mine.

For an album so indebted to the past – running from as much as it gets nos(e)talgic for it – it was only right, though unexpected, that Push reunited with his brother, now a born-again Christian and leading a much cleaner life, who added a No to his pen name of Malice to show everyone what he’s about: No Malice. Interestingly though, he’s credited only as Malice here, which makes sense when you listen. “I Pray For You”, a Ye track of course, uses bombastic church organs and a Labrinth feature on the chorus to make the song larger than life. Malice has one of the best verses on It’s Almost Dry and of his whole career, putting on display the tug-of-war of his drug-dealing past with Push and his desire to leave it all behind:

‘X told you hell is hot, I told you ‘Repent‘
Faith never waivered as I walked along the fence
Faith moves mountains, so what are you up against?
Watch my brother ’round you bitches, I know he pretends
I greet you with the love of God, that don’t make us friends
I might whisper in his ear, ‘Bury all o’ dem‘
Light another tiki torch and carry it again
Back up on my high horse, it’s chariots again
Put the ring back on her finger, marry it again’

Malice‘s legacy ensures that desire will never truly be possible (‘Today’s top fives only strengthenin’ my myth/Belong on Rushmore just from chiselin’ a brick‘), especially as long as his brother – who he loves and supports unconditionally, enough to jump back on a track like this – has cracked rose-colored glasses on regarding their past that pays him in the present through his art. It’s a sweet dynamic, one you can’t fake or imitate – these are two brothers that have been through hell and back (‘Vietnam flashbacks, I get triggered by a sniff‘), who had to get it however they could, and that sort of bond is near-unbreakable, even if they went on to choose different paths in life. Though after this, maybe Push and Mal realize they’re still a lot closer than appears.

It’s Almost Dry is a momentous album. Lots of discourse among fans over what’s better, this or DAYTONA, this or King Push – Darkest Before Dawn. It’s not so much about that for me – each album is a snapshot of where Pusha T is, distilled through his obstinance with the drug game, and contextualized by where he’s at in life at the time. The funny thing is, with every new album he seems to be on the top of things, so convinced by his confidence and technical prowess, and aging like wine (44 is practically a pensioner in hip-hop years). It really all comes down to whether or not you’re willing to go skiing with Push or not. I’ve had a season pass to the mountain for years so to speak, and the powder’s always been fresh. This is a great album for existing fans, but rap fans in general will find a lot to like here, especially on Pharrell‘s tracks. He doesn’t go by King Push for no reason.

Though, I will say I was disappointed by no ‘yuugh‘ adlibs on this album!