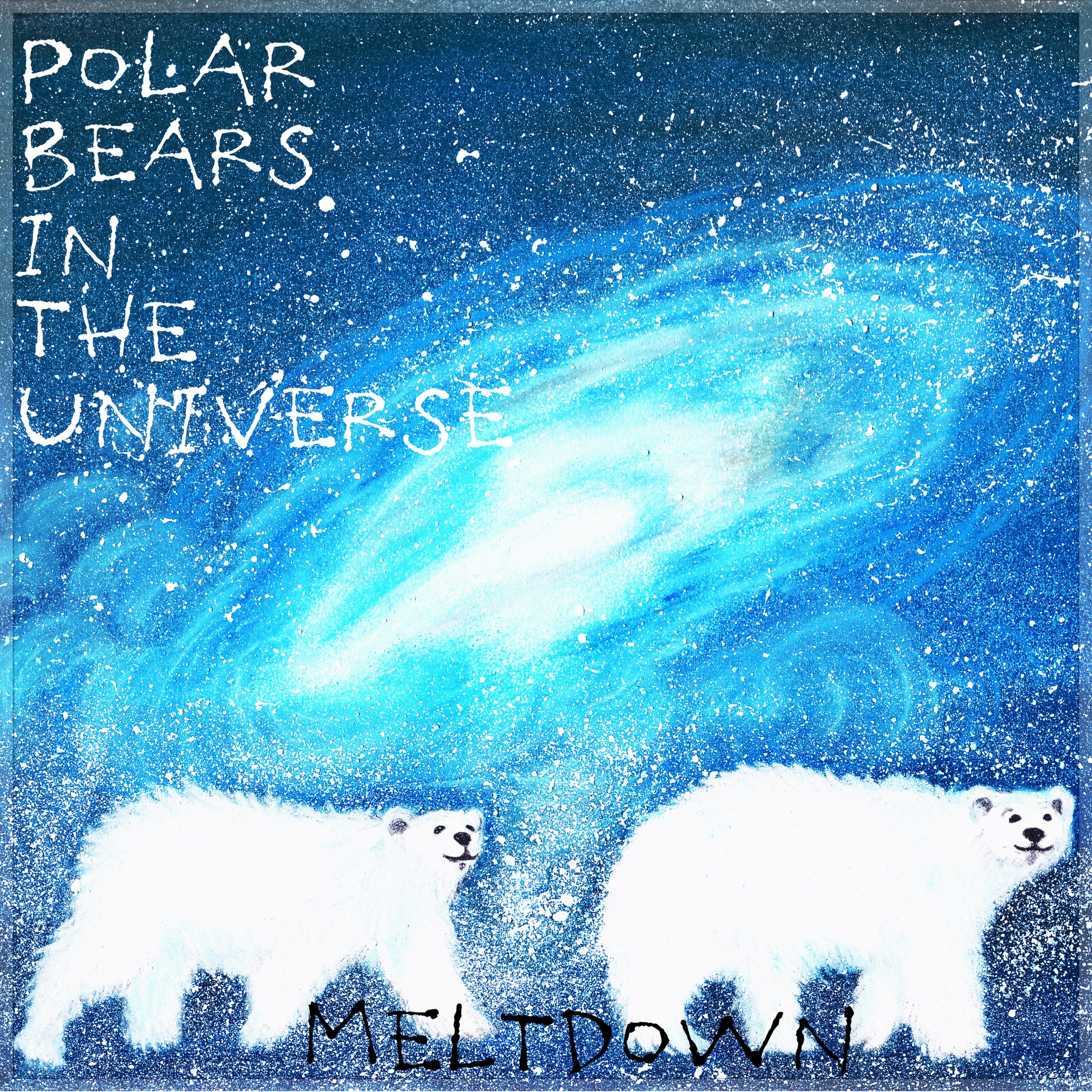 Polar Bears In The Universe – “Meltdown”

By Dominik BöhmerDecember 27, 2016 No Comments

Grab a cozy blanket and a nice cup of tea. Settle down. This one’s for all those beautiful, crisp winter afternoons we still have before us.

Instead of what would’ve been just another regular review, the music on acoustic/post-rock/electronic outfit Polar Bears in the Universe‘s latest record Meltdown inspired me to write the short story you see below. You can listen to the record here, and I strongly suggest you to do so while reading the text. Enjoy!

It was the last day of school before the holidays. All the children were sitting at their desks, gleefully anticipating the year’s final ringing of the bell and the joyful times of freedom and mirth it was soon to announce. The clock’s hands had a different plan altogether, moving almost painfully slow. Getting more and more antsy by the minute, the children began fantasizing about cavorting through the snow, adorning the Christmas tree with glittering ornaments and whatever fond expectance crossed their restless minds. One boy, however, seemingly not affected by neither time nor anticipation, just sat at the window, watching the soft white snowflakes dancing in the gentle breeze, his eyes glistening at the sight of these fragile entities warily making their way to the frozen soil below.

At last, the treacherous bell rang, much to the relief of the children, who were now beginning to pack their bags. Cheerful chatter began to fill the room. “One moment please,” exclaimed their teacher amidst the turmoil, “it is I who releases you, not the bell.” Incredulously beholding her, the children were on the brink of loudly protesting when she began to speak again: “I’m only joking, of course. Happy holidays, kids, see you next year!” Hearty laughter arose, and in that joyous spirit they all gathered their belongings and left the school building, either to enter the buses or to get picked up by their parents. Some of the children decided to make the most of the delightful snowfall and went home by foot; among them was the boy who was lost in contemplation of the weather mere minutes before. With a lively pace he strode towards the forest.

Deeper and deeper he went into the woods. The afternoon sun’s golden glow shone on the leafless treetops. Once green grasses laid under cloaking layers of hoarfrost, and were now crunching under the boy’s feet. Bustling birds filled the air with their songs, searching for food and shelter for the fast-approaching winter. All this was familiar to the boy, as he had a habit of roaming these parts no matter the season. But when all laid barren, silent under the weight of shimmering frost, the old familiar ways magically turned into realms of endless wonder. Even the ordinary sparrows crossing his path, roused by his presence, who were now settling down in the forlorn trees, appeared to him to be the epitome of grace and amenity. The boy looked around himself for a moment, standing still beneath the falling snow. He smiled. He knew exactly where he would go next.

Every being has got its own ‘special place’ it seems, a certain space in the world apparently allotted to nobody but itself, where it can feel perfectly at peace. And the boy was well on his way to arrive at his. Looming between the outstretched branches of two particularly old and withered trees, he could already feel its presence. A simple wooden plaque, hammered onto a plain pole, proudly stood at the end of the forest road, announcing this peaceful haven as Lake Helevorn. Just before the place where the waters met the shore, the boy halted.

Completely frozen over, the lake had nearly completely disappeared under a thick, fluffy coat of snow. Where the sun actually managed to shine its fading light on the cold surface, however, it created a luminous reflection of blazing gold and orange. Breathing in the cool air under the warm sunlight, the boy stood taking in the scenery. Although he had visited this place so often in his life, he was taken aback once more by its beauty, so much so that he didn’t perceive that the evening was fast approaching.

The sun began setting behind the conifers along the horizon. Suddenly realizing his tardiness (it was almost evening by now), the boy was disheartened. For him, it felt like not even an hour had passed since he arrived at ‘his’ lake. Bidding farewell to the beautifully familiar surroundings, he went on, resuming his way home, if somewhat downtrodden. Fittingly, the clouds were getting ever darker, and the temperature was dropping perceptibly, seemingly by the minute. Snow was falling heavily now, the tiny crystals of yore morphing into thick white flakes. Not a single thing appeared to be moving in the entire forest except for the boy, not even the birds who were flying to and fro mere minutes earlier.

An eerie silence had befallen the world. Between the deserted skeletons of the treetops in the sky and the brown remains of their erstwhile foliage on the ground, no sound was to be heard. Only the crunching of the snow beneath the boy’s feet dared to disturb the forest’s solemn hush. He looked up to the sky. No sunlight passed the heavy clouds now; the orange glow had been replaced with a faded grey sheen. After a while, the road came to a fork in front of him. Adjusting his gloves and beanie, he stood still for a moment. He rubbed his hands together, for it was bitterly cold.

The left hand road was the one to take, and the boy knew it well. He could already make out the lights of the small suburb he and his parents were living in; no more than 700 souls could have possibly lived there. A tall figure drew closer on the road towards the end of the forest, accompanied by a much smaller one. Initially startled, the boy sighed in relief, as he made the figure out to be Mr. Campbell, his neighbor, who was walking his dog Emma, a spry golden retriever; hence the second figure. He nodded at them politely. At long last, he had left behind the woods.

More running than walking now, the boy paced the dimly lit streets. Smoke rose from the chimneys of the houses he passed. Only few people were still about; the weather was better suited for a pleasant evening inside anyway. He felt worried. How would his parents react to his prolonged absence? Slowing his pace as he turned into his street, he saw his home: a modest, cozy red brick house. Colorful lights were in the windows, and snow covered the otherwise black roof. But more importantly, he saw his parents standing in the door smiling, as if they had been waiting mere minutes for his arrival, waving at him.

A fire was burning in the chimney, crackling as it consumed the firewood. The delightful smell of pine and incense filled the air, and the whole living-room exuded a languorous warmth. Several ornamental figurines were spread across the room; a jolly little snowman was placed on the windowsill. Next to the yet undecorated Christmas tree, a chair stood in front of the window, looking out. The boy sat in the chair, covered in a blue and white knit blanket and holding onto a cup of hot cocoa. His mother stood beside him, stroking his hair with her left hand. “We were worried about you”, she said. “But not too worried, I might add,” his father chimed in, leaning against the door frame, “you’re a big boy now, after all.” “That he is,” she admitted. “Just be a little more punctual next time, okay?” The boy replied: “Okay!”, smiling at his parents. “Now, who wants to help me decorate the tree later?”, asked his father gleefully. “Me, me!”, shouted the boy, giddily standing up from his chair. He looked out the window once more, his eyes glistening as he watched the snow fall.

Thank you for reading! I hope this gave you at least some kind of understanding of the atmosphere Polar Bears in the Universe create on Meltdown; it’s a chill, laid-back record, perfect as the soundtrack to your next daydream.