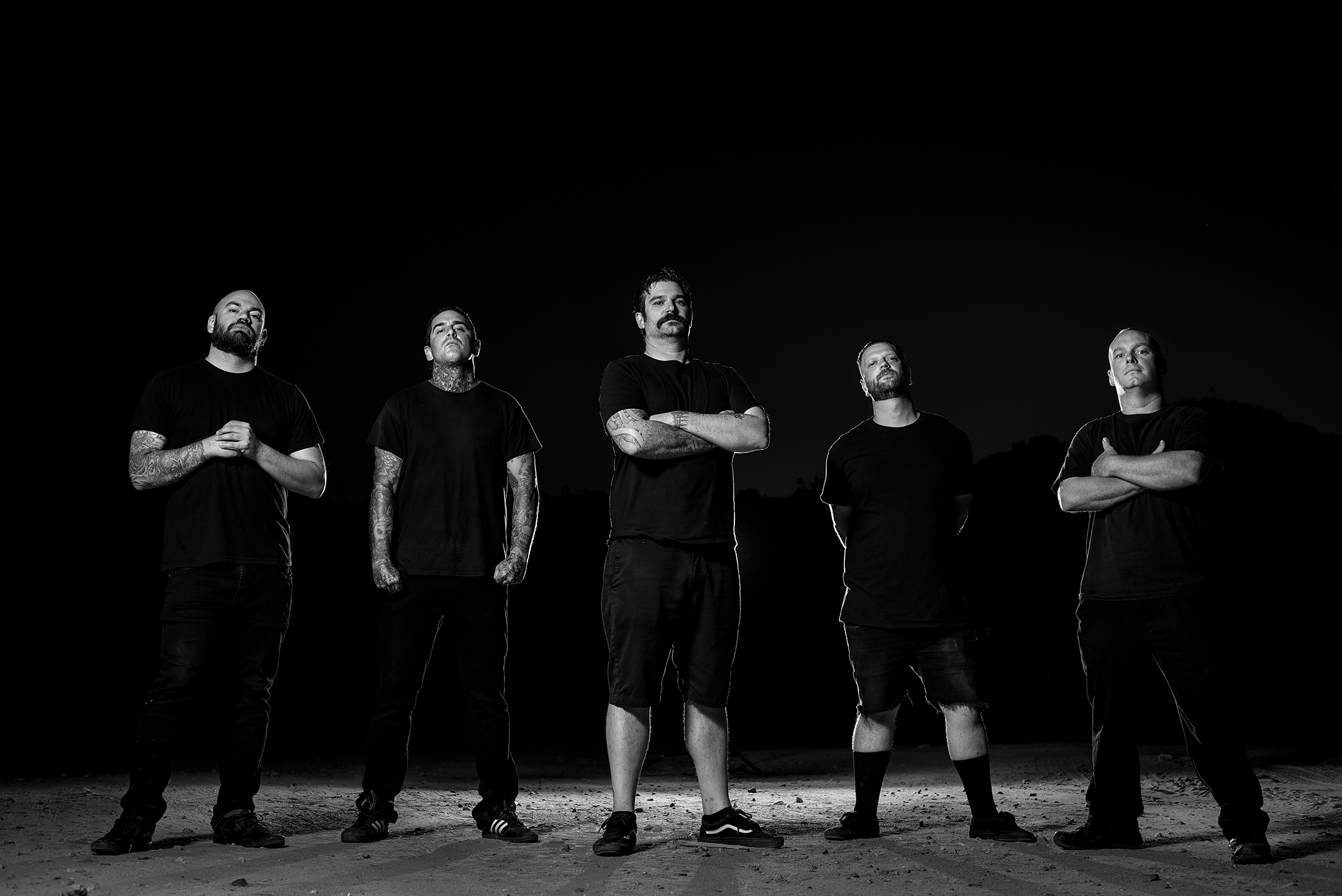 By David RodriguezOctober 14, 2019 No Comments

What’s in a name? In the case of Pissed Regardless, it’s my entire life’s motto. Nearly any amount of worldly perception is enough to doom you to be forever mad, even if your own life is going well. That’s good – we should be mad. We should be pissed, but a lot of us aren’t capable of being as pissed as this San Diego quintet. Their debut album Imperial Cult picks at the blisters of society and the world at large with some dense hardcore with strong forays into genre progenitors like punk and thrash metal.

Playing hardcore comes with some baggage, mostly pertaining to how the genre came to be. Mixing punk and metal might have always seemed inevitable, but nowadays bands are more likely to dance more on one side than the other. Pissed Regardless have this wild ability to be everything they can be: a fine mix of styles, but also lunge out to either side and grab its stylistic influences by the throat only to be dragged into the fray that this band kicks up. Double bass drums, mean-ass riffs, and a careening speed that’s barely held on the rails – the first two tracks and lead singles “Three Decades” and “Halls of Hate” show hardcore blended up into a bloody paste, slung onto the walls in a rage.

If any track is truly bloody, though, it’s “Bleeder”. It shows off the band’s punk roots the most within the vocals; they’re made up of a harsh gravelly wretch and almost have an English lilt to their delivery. The hook is stone cold punk intensity, while the riffs actually call back to 2000s-era metalcore to me. You’ll find that other tracks like “Dichotomy” lead with similar approaches as well – vocals at the forefront and guitars more melodic than hardcore may aim for on average. Real solid stuff, and a slight change-up from their first EP Feed the Birds (released last year), which was more hardline thrashy hardcore.

On the more stringently metal side of things, we have songs like “Castrated”, which is just straight-up thrash distilled into 90 seconds of fuck-off power. This is the band at their most pissed. There’s a steep darkness on this whole album that I haven’t really touched on yet, but every song here regardless of approach has a blackened tinge to it. This is even more apparent when compared to their previous work, where the band took on a tone more akin to Iron Reagan; that is, heavy and calculated, but also purposeful and almost fun.

Everything comes together well, even when Pissed Regardless skew a bit to show off the parts that make up that sum. This is modern metallic hardcore through and through – the absence of bands like Trap Them, a favorite of mine, allows them fill a void that others aren’t capable of filling in quite the same way. Still, there are some points where I feel like Imperial Cult is a little rare and could have used more heat to cook. All the elements for a great album are here, but they are constructed in ways that overlap some from song to song and create some unsavory repetition. The biggest surprise we get here is the album closer, “Hell’s Coming With Me”, which starts off slow and menacing, but builds to a head that only wishes to collide with your own bone to bone. The final lyrical condemnation of ‘fuck your modern world‘ pretty much sums it all up.

Pissed Regardless aren’t here to reinvent the wheel – they’re here to run you over with it. Your inclination to pit-ready rage and hardcore sensibilities will determine your enjoyment of this album. Suffice it to say that if you’re looking for a mad time, you came to the right place. Imperial Cult is melodic without sacrificing heaviness, and pointed without pulling any punches. It’s a real fun time, keen to help you blow off some steam and rearrange some furniture should the mood strike you. Hope you got good home insurance.