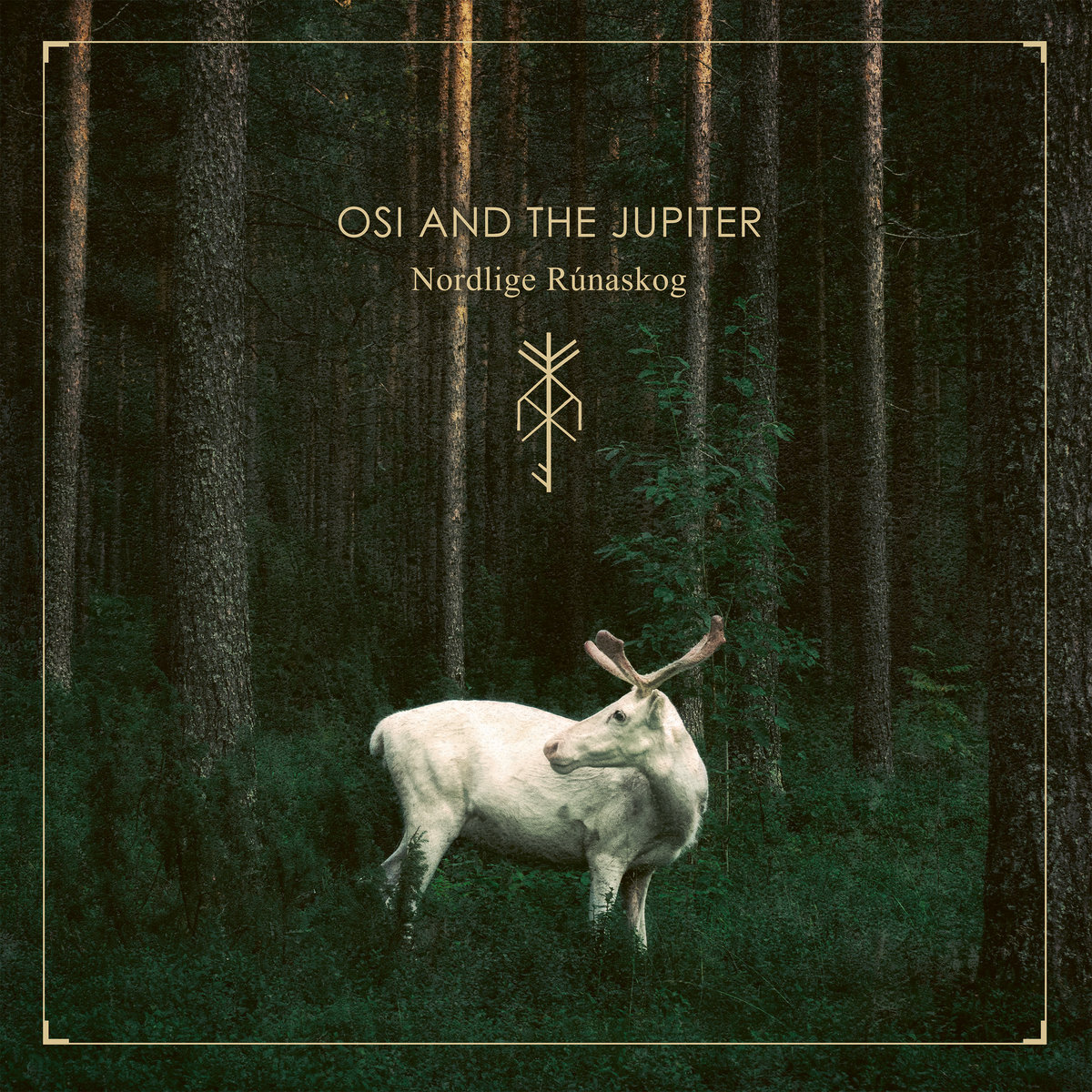 By Robert MiklosDecember 20, 2019 No Comments

Norse mythology comes to life in the scintillating aural journey that is Nordlige Rúnaskog – I think this concisely summarizes the essence of this record.

Osi and the Jupiter is the brainchild of Sean Michael Kratz. In Osi and the Jupiter, Burial Oath, Witchhelm, Ulven, and Black April he goes by the moniker Sean Deth. He is also fronting another project named Lucian the Wolfbearer, where all the compositional and performative effort is credited to him; there he dons the stage name Lucian. It’s obvious then that Sean Deth is quite a prolific artist, focusing primarily on folk and metal ideas that revolve around norse mythology and old germanic paganism.

Nordlige Rúnaskog is the third Osi and the Jupiter release, and it goes further down the path of evoking the full-bodied essence of norse mythology with stark authenticity. The title means ‘northern rune forest‘ in Danish. Nordlige Rúnaskog comes in two versions: the regular one featuring ten tracks, and the deluxe edition featuring three extra tracks. I will also include those, as I feel it does the music more justice when looking at the album as a whole. Before I delve into the record, though, I would like to quickly underline that I very much enjoy the level of detail that went into the creation of this record, complete with Norwegian song titles and their respective mythological references, which I will detail in the following.

“Fjörgyn”, the album opener, is the name of the mother of the thunder god Thor, son of Odin; she is also known as Jörð. The song starts out the album with a smooth, expansive, and profound tone that is comprised of a nigh-tribal percussive backbone that is spun forward by the ethereal strings and the shimmering ambient textures. The song exudes a primeval vibe that accompanies us throughout the entire run time of the album. Second track “Lœra∂r” employs an alternate spelling of Læraðr, which is the Icelandic name for Yggdrasil. Along the course of the song we are driven across the mist-drenched landscapes of times long gone, or even times that never were. The slightly distorted vocals that glide about ritualistically change into mystical chants as we arrive at “Dødelig Fartoy”, which translates from Norwegian as ‘deadly vessel‘. We also see the droney elements dimming out giving way to a more folk-infused instrumentation.

“Much Wisdom is Such Grief” takes the journey forward through the cold forests that feel indivisible from the album’s mystical setting. This mellow, acoustically driven interlude, though short gives the listener plenty of time to visualize the surrounding nature and be enthralled by its primordial magic. Following closely in its trails is “Ettr Storman”, which would mean ‘superior starman‘ in Hindi. It seamlessly carries forth the action, hearkening back a little to how “Lœra∂r” chose to unfold itself. “Nordlige Eik Tre” (‘northern oak tree‘ in Norwegian) is a supple and feather-light display of melodic weaves that are layered carefully on top of soothing textures. It contrasts the previous track beautifully and takes example from how the opening track was put together. The vast expanse explored within the confines of this song truly resembles the stalwart stature of an old northern oak, resting gently as a massive edifice of nature.

“Grå Hest” means ‘gray horse‘ in Norwegian, and throughout this song we are carried away yet again by those nigh-ghostly mythic chants that evoke a strong sense of ritualistic communion. “Det Hører Til Skogen” (Norwegian for ‘it belongs to the forest‘) hints at the pagan beliefs that are held as a leitmotif, as well as at the fact that we are as much a part of it as it is a part of us. The cadenced percussion steadly drives us ahead as we approach the end of the album. “Galdrafö∂r” is an alternate spelling for Galdraföðr, one of the many names given to Odin. This particular name means ‘Father of Magical Songs‘, which makes it a rather fitting title for the song, especially because of the way it opens with rain sounds dripping about the tribal beginning. Here we are treated to a more simplistic approach that prefers to rely almost solely on percussion and vocals.

“The White Elk”, the longest song on the album, leaves the previously established territory of profound and sullen atmospheres for a more light-hearted, brighter vibe. The way this manifests itself is that the song takes a little from each of the elements presented thus far, creating a comprehensive, nearly epitomic song with a truly epic approach that excels in its breadth and breath. “Fylgja I (Blood of Yew)” refers to supernatural entities from norse mythology, alluding to their purpose with a steady and monotonous delivery that takes on a trance-inducing shape. “Ymir”, representing the ancestor of all jötnar, musically goes further into the mythical mist, reaching higher beyond the earth from which we have left at the beginning, finally bringing us to “Fylgja II (To Tread the Path of Fire)”. This mostly ambient coda wraps everything up in what is a somber and deep display of enrapturing soundscapes that feel like they are guiding us outside of the boundaries of this perceived reality.

I honestly don’t know what more could I possibly say about Nordlige Rúnaskog. It is an enchanting journey throughout an era that is far beyond any sort of modern grasp. If one would like to teleport there but lacks the necessary equipment to do so, a pair of headphones/speakers should suffice in its stead, if only this record is being played. This is one of the most authentic records I’ve come across this year, and easily one of the best in this niche.