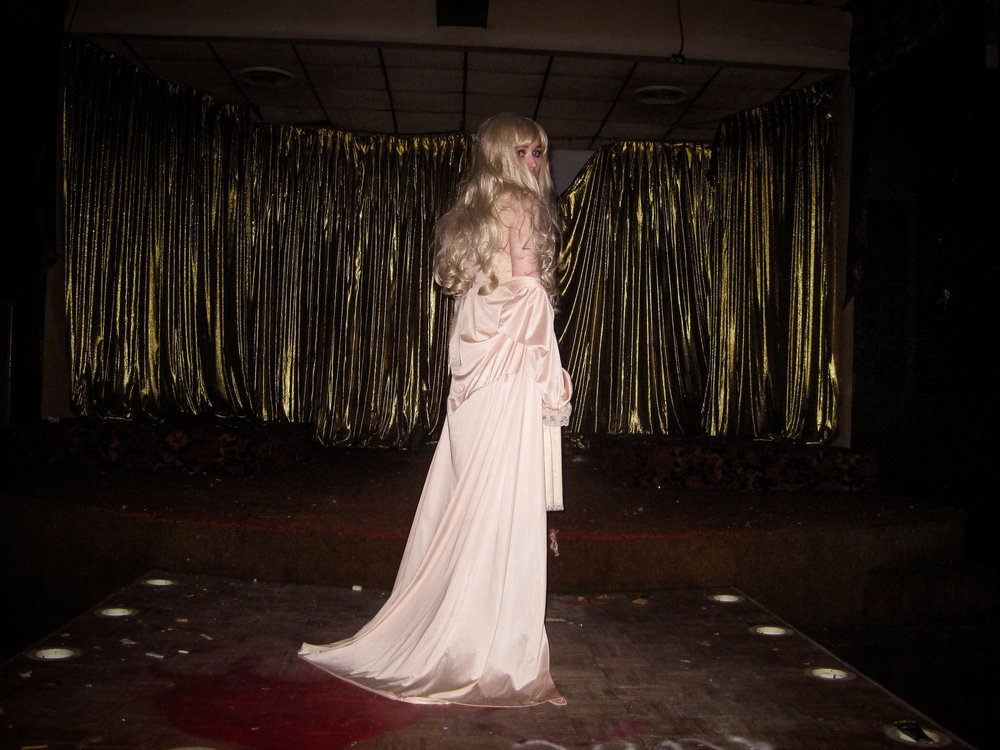 Nicole Dollanganger awakens somber, haunting feelings with an ethereal aura both familiar and unique with Married in Mount Airy.

It has been a little over four years since the release of Nicole Dollanganger’s Heart Shaped Bed. Despite a fair amount of ambiguity surrounding updates of what was to follow up the 2018 release, “Gold Satin Dreamer” and “Running free” served as splendid beacons to remind fans that their anticipation would be met with great reward. As such, Married in Mount Airy makes for the perfect follow-up, in fact, to Heart Shaped Bed. Strong production value, super solid songwriting, and a fine mix of everything that made us all fall in love with Nicole’s style years and years ago, with plenty of new elements blended in to provide new direction and dynamic.

Beginning the album with the title track, Nicole welcomes us right back to her proverbial gothic, dark-ambient prairie of sorts. Immediately, we are greeted with a grainy, whimsical sounding acoustic guitar that leads into the familiar, ghostly vocal melodies of the Canadian singer-songwriter, providing the groundwork for what feels like a darker version of an old-timey country and folk ballad. For some reason, I am also reminded of my first time playing Resident Evil VII, where the player reaches the first safe room of the game and gets to hear this somber, down-tuned banjo track playing in the background. Similarly, Nicole has a particular art to taking the morbid, dark, and desolate-sounding elements and fabricating them into something beautiful.

Carrying on throughout the entirety of the 12-song waltz through an abandoned small town in the mountain-side (as much as can be depicted in the music, that is), Nicole treats us to some returns to her roots, in a sense, on tracks such as “My Darling True” and “Moonlite”, with lyrical subject matter in both that seems to speak of a troubled, yet deeply devoted love story. Take for instance, “Moonlite”, where the narrator describes a sort of obsession the admirer has with the person they’ve given this focus to. Much like tracks we’ve heard from the days of Natural Born Losers, Heart Shaped Bed, and Observatory Mansions, Nicole gives the perspective that just as wonderful, buttery, bright, and happy as love can be; You may find yourself in less than fortunate places when that feeling gets a bit too intense and turns into something more along the lines of controlling and obsessive.

My personal three favorites are definitely “Dogwood”, “Bad Man”, and “Sometime After Midnight”. The instrumentation on each of these tracks not only embodies the purest essence of who Nicole Dollanganger is artistically speaking, but serve as general monuments to the peak of which she’s climbed with this record. Something about the minimal approach in timbre with “Bad Man” really stuck out to me, too, where so much emotional power is present yet compacted into essentially just vocals and acoustic guitar. The record, even with its hints of reminiscence to older material, doesn’t feel predictable; Each song, even if having a similar lyrical theme, produces its very own atmosphere, the dynamic is virtually cinematic.

Anywhere that Heart Shape Bed lacked, be it in production value or even songwriting, Married in Mount Airy has absolutely delivered and surpassed for. With producer and likewise songwriting mastermind Matthew Tomasi providing helping hands on the mixing, it was sure to be a success. But, according to the liner notes, this was also produced, recorded, and mixed by Nicole herself, which is yet another admirable quality in this audible labor of love. It only adds to my point that Nicole has crafted a true permanent mark in the realm of ethereal, dark, dream pop-adjacent indie music; Where she was once sort of categorized as ‘bedroom pop’, she has now stamped herself with a massive wall of blissful and beautifully bitter sounds that will enchant listeners on a wider scale than ever before.

Easily some of her most quality pieces of music yet, I think the only track that fell flat for me, if I had to pick one, would be the interlude, “Summit Song”. Even with this statement, that is not to say the song is bad at all, the instrumental 1:55 passage just seems a little unneeded in my opinion, especially with its placement being more towards the conclusion of the album. But, I could see this being used as a really cool live intro for future performances, and even with its odd location in the track listing, it still serves as an interesting soundscape that further builds on the ‘cinematic’ feel I mentioned earlier. We have a dire need for more Nicole Dollanganger songs in Netflix originals, films, and other pieces of visual media alike. As she has proven with her live act in the past, much of Nicole’s music ties quite closely with a theatrical, visual element, after all.

A great way to start the new year, Married in Mount Airy is one I’d absolutely recommend any and all fans of Nicole Dollanganger to check out immediately! But, if you are unfamiliar with her work up to this point and wonder where you should start? I’d say still probably just start here, too! Folky, country-esque instrumentals crossed in with muffled, pounding, almost industrial-style electronics, as well as a plethora of ambient soundscapes to boot – This record has all the bases covered in terms of hypnotic, ethereal appeal. Take this record on your Walkman CD player to the next gothy picnic you and your partner have by the cemetery! Well done, Nicole, very well done indeed.