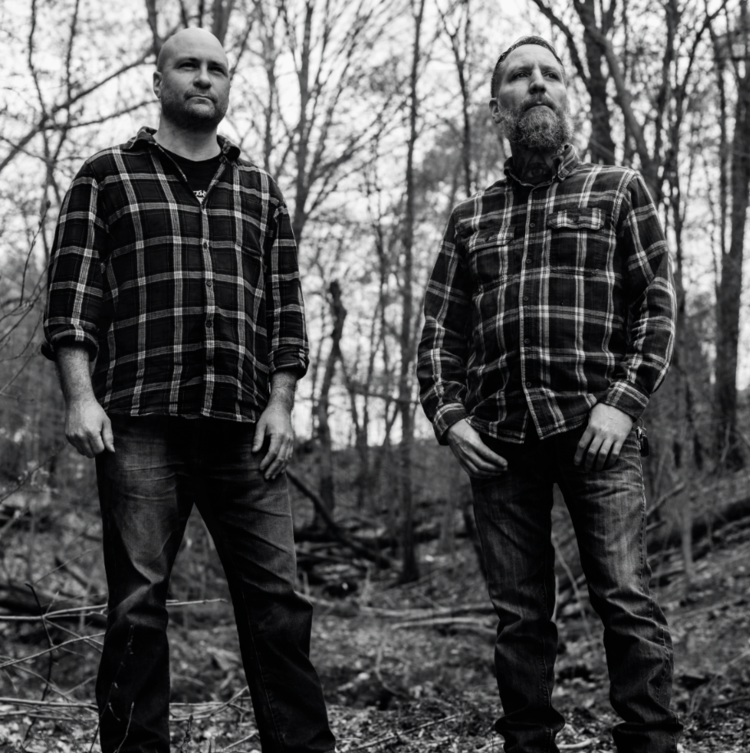 Nechochwen have been an absolute gem in the blackened folk metal game for years now. Kanawha Black changes nothing about that, committing further to stories and the history of Indigenous Appalachia with expert writing and performances.

To say I’m a fan of Nechochwen is a bit of an understatement. The West Virginia black/folk metal band was integral to exposing me to different facets of heavy music, not to mention they were one of the first Native/Indigenous bands I got into that didn’t just use those stories and histories as a theme, but rather embodied it as a whole. As a result, their music isn’t just a well-researched ‘story time’ set to guitars and double kick drums, but a passing along of cultural essence, lived by people past and present, in the name of provoking thought and providing valued perspective. That streak continues here with Kanawha Black, a reference to a specific type of flint stone that can be found in their home state. Jake’s about as big of a fan as me of them, so you know what we had to do…

Jake: David, I have returned to our chat to talk about Nechochwen. This band is no stranger to either of us, both loving their now somewhat legendary Heart of Akamon album from what seems like forever ago. Well we finally got a new record from this folky black metal duo and I can’t wait to talk about it. Where should we start?

David: Hey Jake! I think it might be cool to start off by talking about our expectations for this. As you alluded to, it’s been a while since their last full-length which was Heart of Akamon, legendary indeed, and probably my favorite folk metal album of all time, especially in the indigenous realm of things. How were you feeling going into Kanawha Black?

J: I was feeling pretty good honestly. I love that little family of Bindrune artists and based on the trajectory of Nechochwen’s albums leading up to Heart of Akamon, things seemed to be getting progressively heavier. Their blending of folk, indigenous point of view, and black metal just really sits well with me. I was expecting things to get even heavier and richer.

D: That’s totally fair. I didn’t have any hard expectations like that myself, but I knew it was going to be rich (perfect word to describe them), atmospheric, and transformative. Whether heavier or softer, I would have loved it because I love both sides of Nechochwen like that.

And hey, we get a nice abundance of both, huh? This album’s very fleshed-out and fully featured without stretching itself too thin, from the explosive title track to the more thoughtful yet still heavy closer “Across the Divide”.

J: Absolutely. I think there are a lot of places that the album could have gone, as you said, and I would have been happy regardless, but the fact that this feels so balanced is incredibly refreshing. I love the songs that you just mentioned and how they each bring dynamics into a front-and-center focus and of course that idea is interspersed across the whole album. I’ll also say that this is the only metal album that I know of with slap harmonics, so that’s another notch in Nechochwen’s belt. So much range on this thing.

D: Definitely, and it’s so far beyond the calm folky song here, metal song there, repeat ad nauseam that bands tend to do. Everything is so interwoven, and yes, packs more range. It’s a facet of the rugged and storied beauty of Appalachia as well, a region I’m not familiar with personally, but have a connection to with the music I listen to. I think of Lingua Ignota’s SINNER GET READY which incorporated a fair amount of folk from that area and just how beautifully it clashed with the neo-classical fare that Kristin Hayter’s known for. So too does Kanawha Black capture a keen essence of that region in a different way.

What were some stand-out moments for you as you perused this record? I know you got the vinyl – I’m sure that’s been an aural treat.

J: Oh yeah, I ordered that wax as soon as it went on sale, getting a copy of Heart of Akamon is almost impossible and I didn’t want it to be another one of those situations! As far as standouts, I love how this album begins. No punches pulled, just storming the castle from the first note with that scorching title track. I really loved that they did that. As mentioned before, I also really liked the way “The Murky Deep” begins. It actually reminded me of the way that Death or Cynic would begin a song, just riffs to spare so they throw like three or four at you before the song even begins. Just an embarrassment of riches in that department.

D: I don’t even have a turntable and I’d like to have Heart of Akamon on vinyl just because of how good and impactful it was for me. Anyway, yes! “The Murky Deep” is absolutely exceptional, particularly that intro, the likes of which I almost never hear. The way it builds into, and onto, itself with the acoustic guitars, then the distorted guitars with the full band, and melds it all together for when the vocals come in. Speaking of – the vocals on here? Stellar. Love the whispered vocals in “I Can Die But Once” that sets the tone for a proggy, haunting, emotional track.

This is where I’d like to shout out the production on this album which I feel is the best they’ve had. Things are so crisp and clear. You can hear every damn note, vocals don’t get buried – literally no complaints.

J: I’m in violent agreement, the production is great, especially on the vocals. Part of the beauty of the Appalachian folk influence is some of the mythos that it brings and sense of wonder and kind of timelessness of the region. So the vocal lines and harmonies are put in the spotlight perfectly, giving emphasis when needed without getting too shiny. As with all things folk, these are tales and history being told so makin sure they got that right was paramount.

Another real high point for me, no surprise, is Nechochwen AKA Aaron Carey’s guitar work. The acoustic bits to the gorgeous melodic solos, it’s really a guitar-centric album just because there are so many approaches to the instrument present. The fact that all of these disparate angles work together so well is a testament to their songwriting acumen.

D: Of course. Can you imagine if Carey never incorporated those heavier elements into this project? That didn’t happen on a full-length until their sophomore effort Azimuths To The Otherworld when Andrew D’Cagna (AKA Pohonasin) officially joined. It’s just a great marriage of sounds. And yes, the history behind it all is so wonderfully felt, particularly from a Native lens. There’s a strong sense of pride in their work, recognizing the pain of the past and the tumult of the present, but never letting that persistent light of hope and perseverance fade away, acting as the orators and storytellers for those cultures that they are familiar with, with a light twist (Carey himself is descendent from the Shawnee and Lenape tribes). As informative as it is entertaining, and that’s what Carey set out to do with Nechochwen for the most part – he and D’Cagna talk about that and reflect on their own history in this great piece on Bandcamp.

J: I also think that is the one of the biggest draws to this band for me is that, as we said earlier, ‘richness.’ There is genuine weight behind the themes of the band, their stories, and that sense of ownership and place is something we don’t get a lot of in heavier music, as it’s usually escape fantasies of some sort. There seems to be an uptick in metal with indigenous themes and I am here for all of it; the folklore, the history, and the perspective. I think Nechochwen are a band that balance all of that so well with the musicality. I can listen to them over and over and never get bored or even unstimulated.

So what are some of your final thoughts about Kanawha Black?

D: I just wanna thank the duo for what they do. They’ve been a very important band in my life for the last several years. Discovering them was one of my best finds ever and I’m just glad I can enjoy a wide variety of work under their name, and they’ve influenced a fair amount of similar, yet different acts to form and come out. I feel like we haven’t yet seen the apex of indigenous heavy music, but it’s been a hell of a start the last decade-plus. They’re huge, to me and the scene-at-large, and I hope they know a ton of us out there respect the work, devotion, and perspective. Keep it up, y’all. Everyone out there, support this stuff as you’re able to. Show some love.

J: Honestly, I can wholeheartedly relate and agree with these sentiments. I like metal that doesn’t try to be metal just for its own sake. Not that there’s anything wrong with that approach at times, but when you feel like you know why the artists are doing it and it’s not just the pursuance of art itself but an extension of who they are, that’s when things elevate to an extremely high level for me. So, yeah, Kanawha Black will proudly dominate my turntable for a long while. I love it.