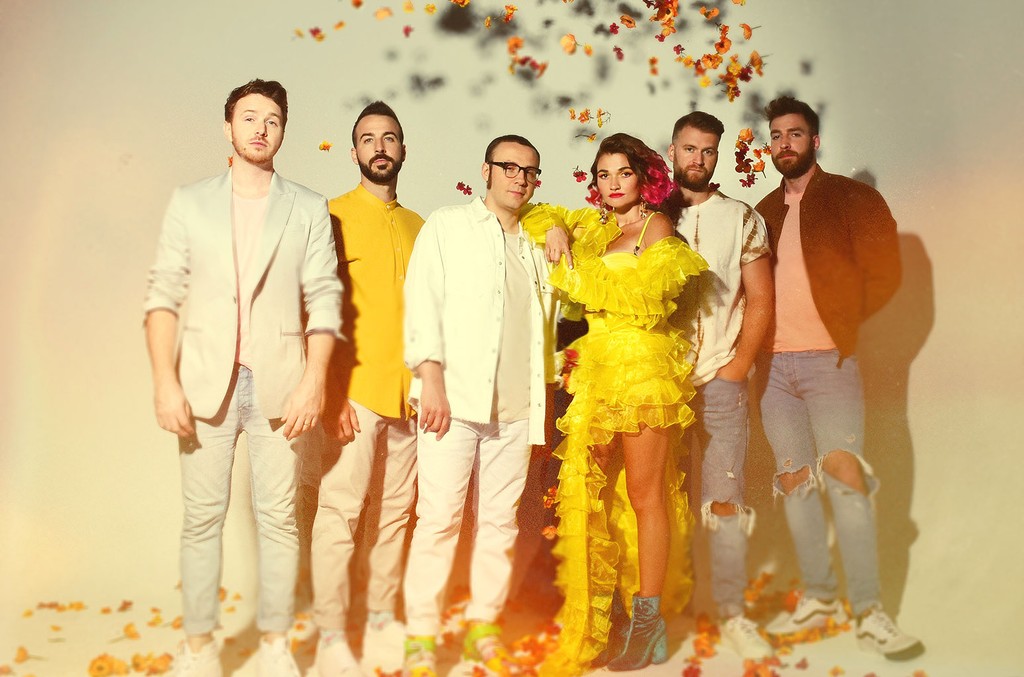 By Tyler KollinokAugust 16, 2020 No Comments

MisterWives move through heartbreak and show that there is always a shimmer of hope at the end of the rainbow with SUPERBLOOM.

Sadness is often veiled by an explosion of color and excitement. In certain scenarios, people who are eccentric and bubbly may have inner demons that are never represented on the outside. So many content creators utilize their art as a means of therapy, as they discuss the feelings they may not reveal in other mediums. In regards to music, songs that focus on pain tend to humanize singers and songwriters, as the curtains are pulled back and the audience can experience a person’s hidden truths.

This is absolutely the case for MisterWives on the band’s third full-length album, SUPERBLOOM. I’ve been following the Brooklyn six-piece indie-pop band since their first album Our Own House was released, and I’ve always been a huge fan of their happy-go-lucky sound and their colorful personas. Vocalist Mandy Lee is one of the best frontwomen in the scene right now, and her vocals are unique, fitting perfectly with the pop style they supply. Early on in the band’s career, Lee and drummer Etienne Bowler dated and, eventually, got married. Much of the band’s sophomore album Connect the Dots is about the love they share and the joys of being in a band with your romantic partner.

However, things didn’t seem quite normal when the band released their EP mini bloom in 2019. The songs still had an upbeat nature, but the lyrics weren’t nearly as cheerful. In May, Lee and Bowler revealed that they were separating as romantic partners, but the band would continue as usual. After this was made public, the release of SUPERBLOOM was announced, and I instantly thought I’d hear similarities to Fleetwood Mac‘s Rumours. The album clearly and concisely represents the journey from heartbreak to acceptance, as the tracklist moves through Lee’s road to recovery.

SUPERBLOOM is a 19-track epic that is unlike anything MisterWives has done before. The album clocks in at over an hour in length, which may seem excessive or daunting for a pop record. To be fair, all five songs from mini bloom are featured here, and the band released “SUPERBLOOM”, “rock bottom”, and “decide to be happy” as singles. Even though many of the tracks were already available beforehand, that still leaves 11 brand new songs, which is a full-length album in itself. Even with all of this new music, I still wanted more. MisterWives has an innate ability to craft music that sounds completely different in each track but also fits nicely into a complete package. The long runtime never becomes dull, and even the ballads (which I’m usually not the biggest fan of) keep my interest throughout.

When the album starts with “the end”, listeners can already tell the change in mood from previous releases. While “the end” was actually the final track on mini bloom, it fits as an introduction far better. While it is still upbeat and exciting, the repeated lines of, ‘All good things come to an end/To make room for new beginnings’ foreshadow the content to come. Although the band members have been together for years, the romantic breakup of two members feels like uncharted waters. By beginning the record with such a statement, MisterWives prepares the listener to discover Lee’s methods of coping through her songwriting.

Just like the band’s previous releases, SUPERBLOOM is filled with various influences. MisterWives experiments with many different elements of funk, rock, rhythm and blues, and 80s pop. Tracks like “muse” and “love me true” take on an amazing pop sound that could easily fit into the repertoire of Whitney Houston and Madonna. On the other hand, “ghost” and “find my way home” have a charming indie-pop sound that I would liken to Walk The Moon and Young The Giant. The band even takes on a folk sound in some of their ballads. For example, “running in place” reminds me of HAIM, especially due to the gorgeous vocal harmonies in the choruses.

The emotions of the songs begin to shift during the back half of the album. The pivot point comes in “decide to be happy”, which is one of the most optimistic and catchy tracks on the record. It has a powerful funk vibe that also shows off an uplifting approach to dealing with acceptance. During the pre-chorus, Lee sings, ‘Flowers, don’t grow without the rain/Goodness, don’t grow without the pain’, showing that she too has grown from the difficulty she has faced from her distress. Normally, a track like this would fit sonically towards the beginning of an album. However, the placement is towards the end, which is perfect for the story arc of SUPERBLOOM.

The album ends with “SUPERBLOOM”, and this track absolutely hits hard. The track is lively, funky, and works superbly as a celebration of survival. It is a perfect culmination for the album, as it shows that Lee has made it through heartbreak and pain. The lyrics, ‘I deserve congratulations/’Cause I came out the other side/I’ve been having revelations/And I’m gon’ let them shine’ represent just how huge it can be to finally emerge from a dark period and accept a new reality. MisterWives very successfully captured the stages of grief on the album, and once the listener reaches “SUPERBLOOM”, they feel as though they accompanied the band through this difficult experience.

SUPERBLOOM is my favorite effort from MisterWives so far. The album is wildly pleasing to listen to and never gets dull or monotonous. I’m constantly impressed with the band’s skills in making feel-good music, even when the lyrical content may not be as gleeful as the instrumentals. Regardless, there are plenty of quality moments throughout the album that consistently put a smile on my face. Although I obviously wish this that album was created from different behind-the-scenes circumstances, the pain that Lee and Bowler experienced truly fueled the fire for the songwriting. If you ask me, MisterWives are one of the best bands in the indie-pop scene right now, and SUPERBLOOM proves that they deserve all of the praise they receive.