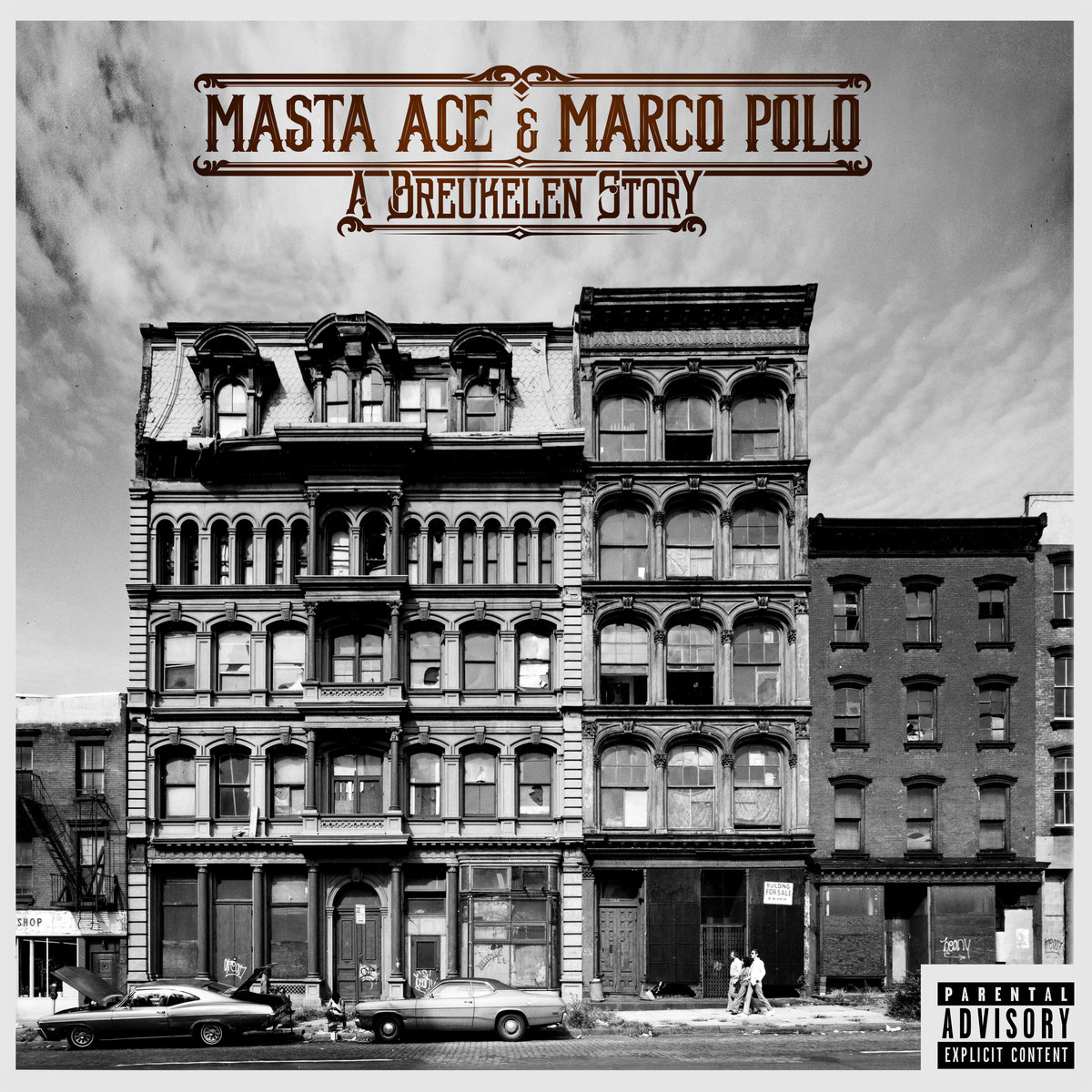 By David RodriguezDecember 2, 2018 No Comments

A Breukelen Story is a love letter to the rough and beloved Brooklyn. Weaving together the personal story of producer Marco Polo and the reality of life in the borough, Masta Ace‘s lyricism is full-bodied and the production is infectiously smooth.

Locations, especially cities, as characters in a story aren’t a new thing, especially in music. I’m not talking about the literal likening of a place to a human, but rather just speaking (or rapping) about a place that’s impacted you and millions of others one way or another [in a way] that gives it character and personality. And who better to lyricize the impact of a place like Brooklyn than Masta Ace, aided by producer Marco Polo?

If you’re wondering why it’s spelled ‘Breukelen’, it’s because Brooklyn, the borough in New York City, was named after Breukelen, a village in the Netherlands, when it was founded. This might seem odd, but it plays to theme of Brooklyn, and New York City as a whole, being a hub for immigration where people come to make a new life for themselves and their families. It reflects its point-of-origin status for so many people, Masta Ace and Marco Polo especially.

But enough context, I bet you’re wondering how it sounds. Marco Polo has a knack for creating some nice upbeat production, but it’s subtle. His way of making jazzy, lighter samples bend to a song’s lyrical content means that Masta Ace can spit with Lil Fame (M.O.P.) about the NYPD’s uncaring, cavalier attitude toward the harassment and imprisonment of minorities (“Count Em Up”), or he can get sentimental about where he comes from (“Breukelen ‘Brooklyn'”), all with ease. From the stuttering piano sample on “Kings” to the choral arrangements on “The Fight Song”, you’d be hard-pressed to find a better fit between rapper and producer. To paraphrase Polo‘s own mother: they make a great team.

Speaking of Polo‘s mom, there’s interestingly two distinct yet related arcs here on A Breukelen Story. Seven skits (including two tucked away at the ends of tracks) tell the story of how Polo migrated to NYC from Toronto, Ontario in Canada. Why? For hip-hop, of course. He wanted to make it as a producer. So, the skits tell the story of him moving stateside to start his career, and includes voice acting from himself, his actual concerned father, proud mother, and other characters impacted along the way, including Masta Ace. We learn how the two met and ultimately what led to their planet-colliding collaboration “Nostalgia”, a single from Polo‘s debut album, Port Authority. Ace never explicitly raps any of Polo‘s own story bar for bar, instead alluding to it throughout the album’s songs, which function more as vignettes stemming from life within Brooklyn. It’s through his bars that we see Brooklyn’s personality – its force and energy molding the people within its limits, for better or worse.

Ace has long been an underrated rapper in my book, and this project just furthers that sentiment for me. He handles concepts well, and storytelling is a strong suit, so this means the lyricism is top notch nearly all the time. Ace sends a message to the young blood in the rap game in “Corporal Punishment”: ‘You can lean and keep sippin’ codeine/And I’mma be a cheerleader, go team/And help my environment go green/And cut your music off like old jeans’. The ‘Masta’ in Ace‘s name has hardly ever felt more appropriate, later in the track making reference to his age (51, if you’re curious), which is basically an elder statesman in hip-hop years. Lyrically speaking, “Count Em Up” is my favorite, with bars highlighting a very real, pervasive issue in Brooklyn and thousands of other cities:

‘There’s so many of us, I mean plenty of us
Cops rolled up, bag like twenty of us
Fuck laws and the probable cause
Search and seizure leave you out of your drawers
Spread your cheeks, bend over, cough
Another false arrest with no remorse
And tomorrow, it’s the same shit again
Hard to keep track of all the brothers going in’

Ace aims to inform with his 20+ lines, where Lil Fame, one of the best features on the album, seeks to show the tension and anger of the situation (‘They always posted up in my neighborhood/Searching all through my neighbors’ goods/Fuck with that little boy, I’mma catch a bid/Now get your fucking hands off him, copper, that’s a kid). It’s a good give-and-take relationship between the two legendary MCs, both on-brand for each of them and playing to their strengths. Songs often take this comparatively macro angle, so no matter how relevant to Polo something is, Ace is lyrically capable of keeping things relevant to anyone that’s been in these situations.

There’s only a couple potholes in the journey A Breukelen Story offers. “Still Love Her” offers up the tired old trope of personifying hip-hop as a woman with lyrics likening her to a once-passionate partner, but once she breaks away and goes her own way (here, specifically, down south to create a new cultural hub for the artform), the possessive, jealous tendencies come out. This wasn’t really cool to me when Common did it decades ago because it always comes with an undercurrent of misogyny, and it’s not a whole lot different here. Likewise, “You & I” is sweet and “Man Law” has good intentions, but fall flatter than other tracks on here.

Masta Ace was intent on being more lyrical here and keeping his name in people’s mouths when it comes to discussions of top wordsmiths in hip-hop. This mission is well accomplished with A Breukelen Story. Marco Polo‘s boom-bap flavored production has served NYC hip-hop well over the years, and to see him return to make a whole album with someone that helped him break through is a wonderful thing. For those looking for it, this is Real Hip-Hop™. For everyone else, it’s a smooth trip with bars dripping with wisdom and beats laced with history, equally hard-hitting and elegant. In short, it’s nice as hell.