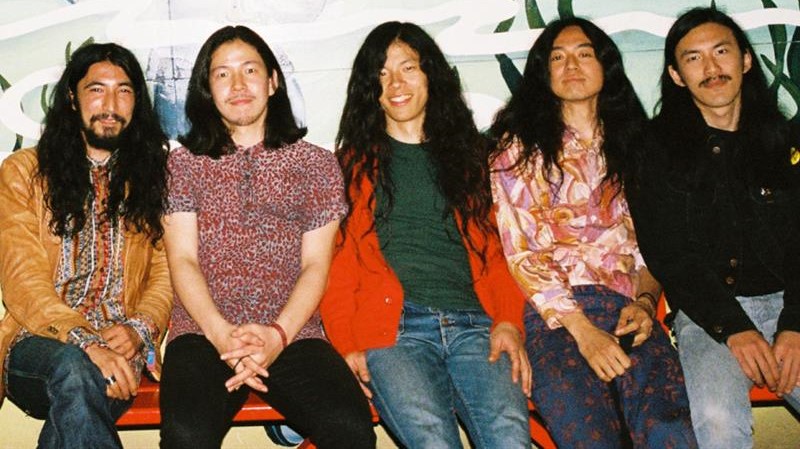 By Billie HeltonNovember 1, 2018 No Comments

Japanese psychedelic rockers Kikagaku Moyo return with a sharply defined sound that stands out from their previous work without straying from their roots. From front to back, Masana Temples is a joyride you can’t help but groove through.

Since their inception in 2012, Kikagaku Moyo is a band that has grown consistently over their now four studio album run. Masana Temples leans heavier into the bands unique sense of psychedelic, while still offering the raw and fierce riffs they first attracted fans with. The album goes to a lot of places, from acid folk to traditional Indian music to funk inspired rock. The band continues to make use of the sitar, as well as synthesizer and distorted guitar. More often than not, long guitar jams end into a measured and reflective period. One thing that remains consistent, however, is the flow. Kikagaku Moyo take their time working through the album in a way that leaves you wondering how 40 minutes breezed by so quickly.

The album begins with the instrumental “Entrance”, which begins immediately with the pleasant plucking of a sitar taking the foreground. Over two and a half minutes, the tempo slowly rises in a crescendo, with more sounds becoming prevalent. It crashes into the climax before quickly winding down with the sitar playing out the end. The second song, “Dripping Sun”, begins immediately with a warm bass line taking center stage. The first guitar riff, enriched with a wah-wah pedal, takes the song into full swing shortly. Drums come in with a synthesizer following, taking off in a groove that had my head instantly nodding along.

There is a break into one of the lighter moments of the album before the vocals join in. Everything slows down into a measured pace, and the vocals come in light and warm. It is a very intimate feeling moment, and one of my favorites of the album. This movement is followed shortly after with a jazzy interlude into a wonderful bass solo. Immediately following this section, the song picks back up with an energetic guitar solo before winding down one last time. “Dripping Sun” is just shy of eight minutes long and encompasses everything this album has to offer at once. It is a magnificent song that shifts between different sounds, meshing together into a cohesive psychedelic composition.

All five members of Kikagaku Moyo traveled to Portugal to record with Bruno Pernadas. Pernadas is a jazz musician, and the band sought him out for production. They wanted to push their creative boundaries by working with someone from a completely different background and it works very strongly in their favor. Masana Temples is a sonically challenging album, and I don’t mean that in a bad way. Pushing themselves to create a diverse and unique album, the band really outdid themselves. The sometimes contrasting sounds of the album work wonderfully. Everything comes together leaving very little feeling out of place. Initially during the lighter moments of the album I was eager to get back to the spacey jams. Getting deeper into the album, I found the wait rewarding and the balance more palatable.

Kikagaku Moyo consider themselves a ‘traveling band’, and commonly refer to themselves as travelers. In their Bandcamp album description for Masana Temples, they describe the album’s feel with the following quote: ‘More than the literal interpretation of being on a journey, the album’s always changing sonic panorama reflects the spiritual connection of the band moving through this all together‘. This quote really resonated with me as I listened to the album and read any media available, trying to digest as much as I could about their creative process. I can feel the journey this group has been through together in this life coming through in their music, and it is beautiful to experience. This is for sure an album to expand any psychedelic fan’s catalog.