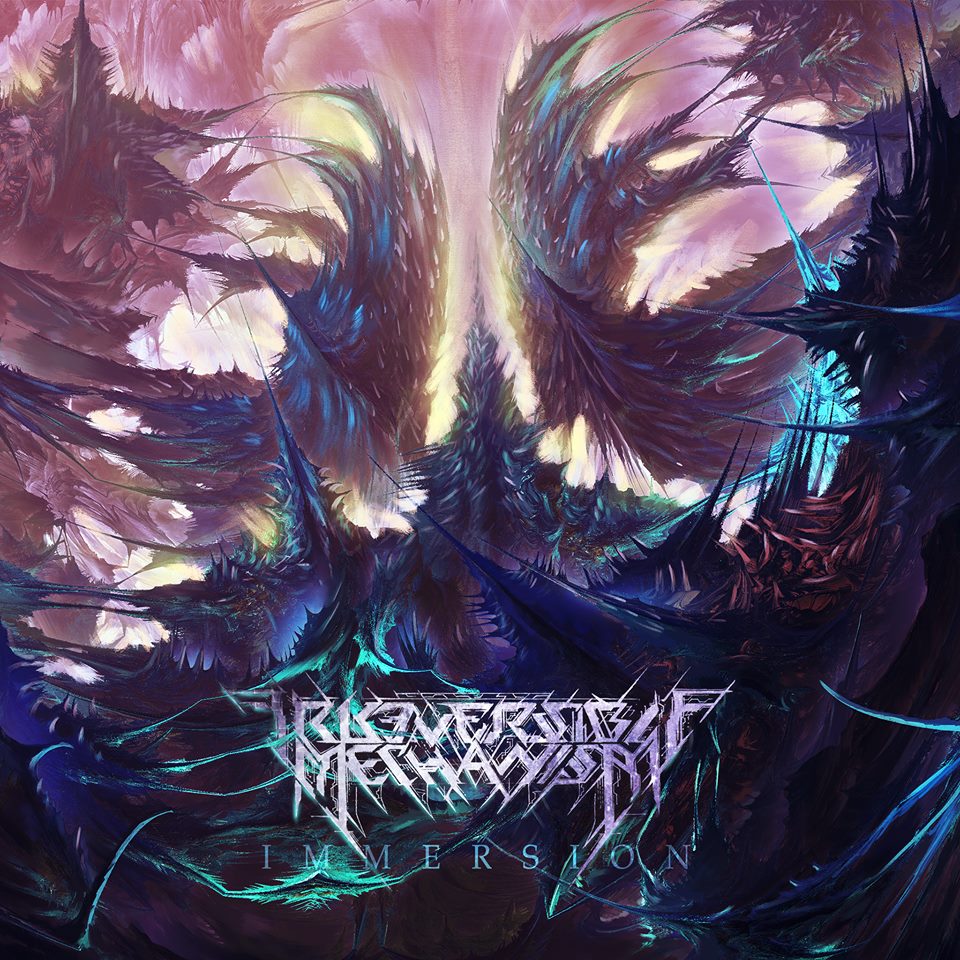 By Pete OverellSeptember 10, 2018 No Comments

Irreversible Mechanism’s latest record Immersion is an ambitious album, a furious blend of synths and death metal, and is sure to engage a wide demographic with its futuristic feel and progressive take on tech-death.

Clever marketing or the truth? That is the question many punters are asking of the inflammatory statement dropped by Blood Music a month prior, stating that Irreversible Mechanism‘s new album is on par or better than Fallujah or firm AOTY contender Rivers Of Nihil. Well, you’re in luck; we have two opinions to unleash upon you, to help you decide whether or not to bite into this record. I’m joined by the Editor-in-chief of Everything Is Noise – Landon – for this review. We both hope you enjoy the read, and of course Irreversible Mechanism‘s second album: Immersion.

It’s rare for a band to drop a debut demonstrating a mature command of a genre, and then for them to change directions completely, while maintaining their impressive abilities with a sophomore release. And yet, here we are. Irreversible Mechanism caught my attention in 2015’s Infinite Fields – an inspiring piece of symphonic/neoclassical technical death metal. Three years and some line-up changes later, the Belarusian band is back with Immersion – an exploration into atmospheric, cerebral progressive death metal as deep as the title suggests.

It seems that many bands that take an ambient approach to progressive death metal incorporate their atmospheric sections as an afterthought; this cannot be said for the music on Immersion. Opener “Existence I: Contemplation” establishes this confidence in all parts of the album’s sound right away. Throughout the track’s five and a half minutes, nothing appears that you would classify as metal, until the last third of the song. Instead, retro synths, reverb-soaked singing, and delayed clean guitars fill the sonic space. Once more metallic elements appear, the welcome influences of Persefone and Cynic emerge, largely counter to the direction heard on the band’s 2015 debut.

And although the album’s heavy sections are well-constructed and technically impressive, the parts that stayed in my mind were largely the group’s forays into singing and mysterious soundscapes. Their talent for this approach is no better demonstrated than on the record’s fourth track: “Simulacra”.  Cinematic electronic percussion is uniquely paired with an organ, providing a haunting backdrop for the repeated hook, ‘There’s nothing for you to look for’.

It is possible that I was more enamoured with the soft sections of this album because I felt that some of the heavy sections fell flat – not because of their content, but because the production somehow seemed to squash their potential. If you can look past this, you will find some musicianship that, if not yet, will soon rival bands like the aforementioned Persefone, as well as Rivers of Nihil and Fallujah. The instrumental finale “Seclusion” is particularly indicative of the band’s talent, with a dramatic build and technically impressive, melodic guitars that end the album on an epic note.

There were a lot of expectations placed on Irreversible Mechanism for their sophomore release. I feel like they subverted these pressures by moving in a completely new direction, yet exceeded them by nearly mastering a new direction so quickly. Of course, I still feel like certain parts of the album were less enjoyable than they would have been with more potent production, but the album is incredibly well-written, ambitious, and even unique among a sea of similar acts. Immersion may not quite be a masterpiece, but it’s a promising I-owe-you.

After hearing the first single for Immersion released by Irreversible Mechanism, I was enamored by the tasteful synthwave influences, which are offset against the atmospheric tech-death promised by Blood Music. Upon listening to Immersion for the first time, I was really blown away because of the variance and quality of songwriting presented to me in this 55 minute album. The band certainly fit right in the middle of the comparable bands, and are definitely an artist that fans of Rivers Of Nihil and Fallujah should check out.

The opening two-part song is a really nice entrance for this crushing album, with the band utilizing heavy synths and ethereal vocals to drop the listener into a high-tech environment, which feels like it’d be right at home as a soundtrack in the Deus Ex universe. The second part of the two-parter is certainly the richest in terms of content, but the well-constructed ambiance in part one certainly deserves praise too. The sound is enveloping and rich, with the production thankfully on a level that justifies the heavy use of layering, and over the top electronica alongside the rip-snorting metal. The blend of clean and harsh vocals is a welcoming reprieve from some tech-death bands who don’t change pitch throughout. However, don’t mistake my words to mean that Irreversible Mechanism does not bring the heavy; you’re guaranteed to have your mind swimming when you approach the halfway mark on the record.

The album should certainly be listened to as a whole piece instead of cherry-picking tracks, as the songs often blend seamlessly into one another. After the switch between the two parts of “Existence”, it’s quite difficult to pick out the change in the tracks unless you are paying strict attention to the album. This makes it a very cathartic album to listen to, allowing the listener to drop their worries and get absorbed by the music. There is no jarring return to reality with tacky chords or unlistenable moments, and I’ve personally found that, when jamming the album en-route to work, the 40 minutes disappear into glorious tech metal fury.

The first single released, “Abolution”, is a great track, offering the listener a deep dive into the various plateaus of sound Irreversible Mechanism can weave together. The soothing ambient part at the very end, which almost has a TesseracT feel to it, fits perfectly between the furious waves of tech-death. The band did push their layering a bit too far in the middle section however. The sounds dilute into a bit of a mess, but this is a rare slip up in this record. “Simulcra” changes the tone of the album significantly, with an awesome blend of synthwave, electronica and glitch giving the listener a break from the intense metal. It’s a must listen for fans of Pertubator‘s latest record.

More influences can be found later in the album. Some of the chunky bass and pulverizing drums reminded me of Atlantis Chronicles, as did some great sampling. The switch-ups the band use are unique and organic, with tasty guitar licks or frenetic screams setting the rest of the instrumentation up for a sudden segue into another movement. The band effectively build their songs into crescendos and wind them down with the same grace too, with some really great songwriting allowing them to express their vast plethora of styles with ease.

Unfortunately, there was only one track like “Simulator” to break up the relentless tide of the later songs. This album beats the shit out of you with a mech suit made of instruments, finishing you off with a really nice instrumental final track to the chin. The album shines brighter than Fallujah‘s last record, with the production at a great standard. The record is over the top at points, and can’t quite beat the smooth songwriting of Where Owls Know My Name, but there is real promise in this band. Irreversible Mechanism‘s sophomore record is heavy, has an array of tones you can’t quite fathom, and really packs a hell of a punch. Make sure to pick up Immersion and keep an eye on this band for their next record.