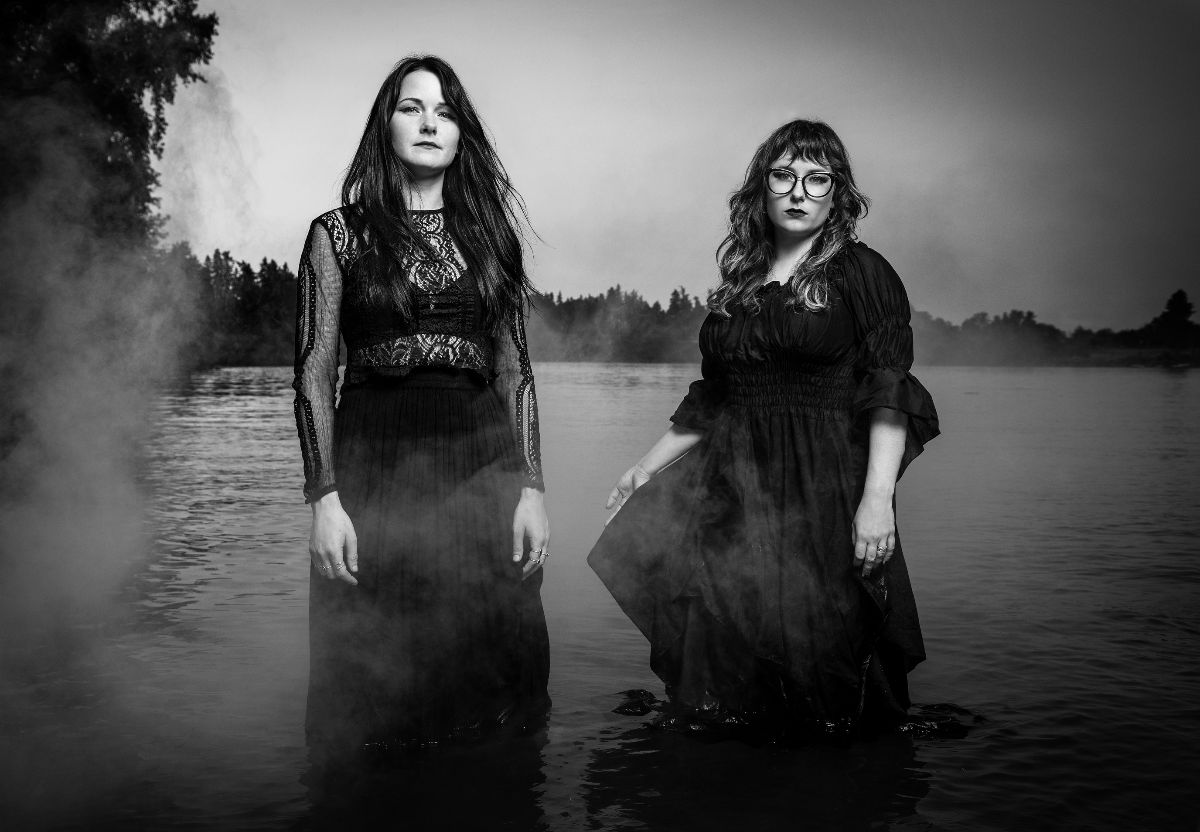 I was introduced to this band when their eponymous EP dropped on Relapse Records earlier this year. Upon first listen, I was intrigued. The mixture of proto-metal, dark rock, and doomy undertones with airy, fierce-but-not-destructive vocals that seek to soothe rather than frighten was a winning formula. The minimalist set-up the duo employs delivers a strong foundation for them to develop dark and lushful melodies that maintain engagement. The only complaint I had regarding the EP was its length – 12 minutes just wasn’t enough.

Fortunately, Hoaxed doesn’t change their formula or energy on Two Shadows. The windy, piano-driven opener does its work setting a gothic stage that foreshadows a definition into what’s ahead.

Leaving no space to catch one’s breath, the percussion increases to a rollicking gallop on “The Call”, which effectively presents the particular form of heaviness Kat Keo and Kim Coffel employ.

Throughout the 27 minutes that Hoaxed give Two Shadows, they maintain that mid-tempo energy with creeping riffs that meander before breaking off into whimsical choruses that are hard not to get stuck in your head. This is particularly prevalent on “For Love”, which is the centerpiece of these nine tracks. Kat’s vocal delivery, asking ‘Would you die for love? Would you kill for love?‘, carries a similar atmosphere of a downtrodden r&b track from the ‘90s (this may just be me). The added backing vocals sound spectral in comparison, and float behind the slithery riff. The percussion stays thunderous, but ultimately not destructive.

Elsewhere, “Grand Illusions” centers Hoaxed back into the proto-metal territory they’re comfortable in. “High Seas” includes a snug, oceanic organ intro that’s probably close to what a ghost ship organ sounds like, then dissolves before they get back into their moonlit-tinged dark rhythm.

“Where Good Won’t Go” is another standout on Two Shadows. The melodic dynamic between these two brings forth a heavy darkness the production doubling emphasizes well. It all comes off as this epic darkness that doesn’t reveal too much, but is also authentic in its cold allure.

One thing that would be interesting for Hoaxed to explore would be developing longer tracks. These two transition so well from one thing to the next, it leaves me wondering how these two would do if their tracks were doubled in length. Leaner than usual doomy efforts, every track is about 3-4 minutes long, and with the way these two tell stories, I just wonder – if they stretched that out to 6-8 minutes, where would the song end up? This isn’t a criticism against them, either. These tracks are fucking cool; I guess I’m just greedy in my eagerness for more from these two.

All of it just feels so whimsical and dark, yet avoids the corniness that can come with the territory (not speaking of anyone in particular). These two play séance-driven sounds that could be easily designated as séance rock, coven rock, witch doom, proto-ghost metal or (I guess if we wanna be unoriginal) fucking awesome dark gothic rock. With similar labelmates King Woman and Windhand, Hoaxed seem to have found a decent home at Relapse. I’m looking forward to their future output, and look forward to hearing how the atmosphere they developed so well on both of their releases translates to a live environment. I hope the set is candlelit and in an abandoned mansion, but if not, a stage will do.