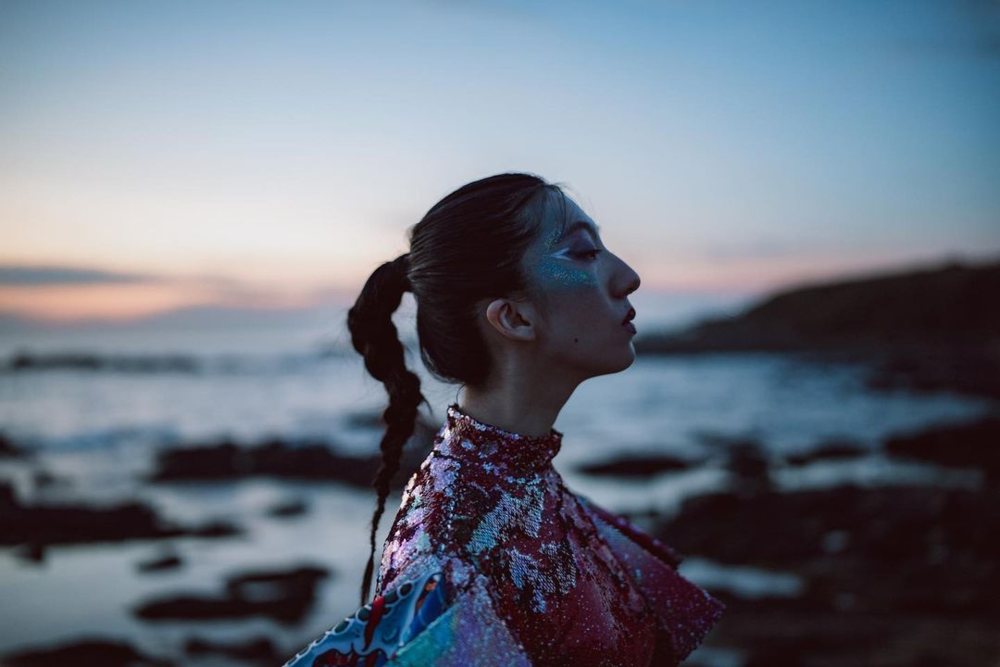 By Carlos Vélez-CancelApril 22, 2022 No Comments

SHUNKA RYOUGEN sees Japanese poetry rapper Haru Nemuri at her creative peak and much, much more. Do not let this album slip through your AOTY-seeking ventures – trust me on this one.

A notorious yellow flannel-wearing melon introduced me to Haru Nemuri with his harutosyura review and I’ve been floored with her music since then. The seamless blend of experimental pop, hip hop, and post-hardcore that the Japanese poetry rapper incorporates on this 2018 debut full-length made for a fun yet rich listening experience, notwithstanding her previous EPs, Atom Heart Mother (2017) and LOVETHEISM (2020), already proving her sonic alchemy prowess. Having had the opportunity to see her live in Dallas, TX a little over a month ago – in all her incessant stage-twirling, cathartic-screaming, and from-the-heart-speeching splendor – it further cemented her as one of the most exciting j-pop acts to rise in recent years for me. With SHUNKA RYOUGEN, however, the stakes are truly higher than ever: This is the definite album that will place Haru Nemuri among acclaimed modern artists and critical darlings alike within this year’s releases in rock – and maybe even beyond.

SHUNKA RYOUGEN has an anarchic uniformity and an emotional depth to it that is immediately immersive in its execution; call it organized chaos, if you will. The fact that this album has 21 tracks should already give you a hint of its sheer scope, though it is anything but daunting – no other album has passed by like a blissful breeze quite like this one in recent memory. The ambition put into the music engineering aspect of it is nothing short of electrifying, the flow within each song and the transitions from one of them to the next are sharp and focused, and Nemuri’s overall sense of musicality here is… extraterrestrial (in the best way possible, of course).

Picking up where LOVETHEISM’s symphonic sensibilities left off, the album begins with “sanctum sanctorum”, a luscious introduction accompanied by a triumphant progression coming from a swift orchestra of organs, choirs, and Nemuri’s trademark harmonization – setting the mood and giving a taste of what’s to come in the most thrilling manner. The first attention-grabbing moment on this album precisely starts on this very opener, as the grimy kick drums make their way mid-track, providing an alluring contrast to the finesse of the rest of the arrangement.

Setting a precedent for the rest of the album, this apparent juxtaposition would become a recurring musical motive throughout it. The dynamics and textures of some of the tracks here are dumbfoundingly engaging, giving them an edge so ruthless yet so vibrant that you find yourself facing with abrupt turns and anxiously anticipating whatever might come next (and this goes for the album overall, as well). “Never Let You Go” is one such song: Its high-octane piano riff jump-starts the song towards an equally driving post-hardcore cadence, including some of Nemuri’s catchiest choruses to date, only to transition to blood-curling growls and murky drum fills before giving way to a break with a groove that is absolutely filthy.

“Souzou Suru” and “Inori Dake Ga Aru” are other examples where the use of contrast and experimental production are displayed wonderfully. The former sports a shimmering art pop sound tackled by reverberating percussion and palpable electronic samples; the soundcapes produced as a result – and coupled with Nemuri’s infectious hooks – present themselves as one whole kaleidoscopic and vibrant sonic trip. Meanwhile, “Inori Dake Ga Aru” details a harrowing account of inhabiting a broken world, coupled with a contemplative yet desperate urge to escape out of it. This is depicted by welling strings, dense bass, and sporadic breakbeat-tinged beats, culminating in a cavernous climax that sees these repressed emotions breaking out of the shell through fierce screams and a shattering wall of sound brought by some of the most abrasive riffs on this record.

Contrast, contemplation, and release – it is no coincidence that there is a connecting thread to these characteristics that can be applied to both music and emotion on SHUNKA RYOUGEN. This is because the record sees a fitting examination of the contradictions found in human behavior and, simultaneously, an active exercise in deconstructing it – hence the second track “Déconstruction”, which kind of summarizes the overall intention of the album. A nod to French philosopher Jacques Derrida and to the cult-like organization Project Mayhem from Chuck Palahniuk’s Fight Club, “Déconstruction” is a manifesto of sorts, prompting listeners to unlearn the conventional dynamics they participate within their surroundings to make something new out of it, be it to inspire positive change or cause havoc to those who oppress – or something else entirely. Nemuri comments on the song:

‘Many people tend to discuss the problems in this world in terms of either A or B. We’re living in a world that has sort of hit a dead end because of that. People are becoming divided in various ways, and I also think that capitalist society is up against a wall as well. There are people gaining power and wealth through the current system, and I don’t think we can start over unless we destroy the structure itself… I didn’t see the term being used very often outside of the philosophical context, so I decided to use it in my music…‘

Surrounded by an adrenaline-fueled marching beat and a commanding chorus, “Déconstruction” vows to challenge this very notion of order and structure to engage in other ways of thinking. It is no coincidence, then, that the songs off this record are equally multi-faceted, destructive, purgative, and inspiring.

Be amused by the sarcastic snarl at the hopelessness of being indebted to a highly ignorant society on “Old Fashioned”, with Nemuri’s flow and delivery having a fervent bite to them, or find yourself entranced in songs such as “Pandora”, where her singing really shines through, boasting beautiful melodies over a contemplative yet unapologetic fusion of chamber pop and noise. Meanwhile, you’ll stumble upon a track like “Ikiru”, an anthemic piece of guitar-driven pop, with bounce and energy boasting of self-affirmation and finding beauty in the madness of it all.

While I would happily continue forth writing my thoughts on every song off this album (I honestly could go on forever talking about “Bang”, “zzz #arabesque”, “Shunrai”, and the beastly transition from “iconostasis” to “Sister With Sisters”), for the sake of this review I’d like to focus on the self-titled track, my personal highlight of SHUNKA RYOUGEN. Aside from encapsulating the spirit of this record, I find this song to be a creative milestone for Haru Nemuri. Not only is it her heaviest song yet, but it also provides a glimpse of the musical and emotional avenues she is able to venture and execute with such conviction to the point of being almost unfathomable. I wouldn’t want to spoil it too much, though (it is quite an experience, after all), but know that the performance, the breadth of the production, and the stirring build-ups alone are worth the spotlight. This is the point of this record where you’re made aware that Haru Nemuri is not here to fuck around.

In live performances, Nemuri usually ends her shows with a note of gratitude along the veins of: ‘Thank you for finding me in the music’, or some other variation of that – SHUNKA RYOUGEN does just that. This sophomore full-length finds Haru Nemuri at her creative peak, with her confidence pulsating through these 21 tracks in an effortless fashion. This is not to say that she hasn’t already demonstrated this on previous releases, however, SHUNKA RYOUGEN certainly sees an artist that has perfected her musical identity and, quite frankly, has more than shown her ability to showcase her craft and passion to the overall music community. In fact, I do not find it difficult whatsoever envisioning this record being paired with acclaimed albums released this year, including the likes of Ants From Up There, Dawn FM, and MOTOMAMI – it is that good. If you have been tiptoeing around getting into Nemuri’s music, then let this album be your chance to get immersed in her world – there’s really nothing quite like it.