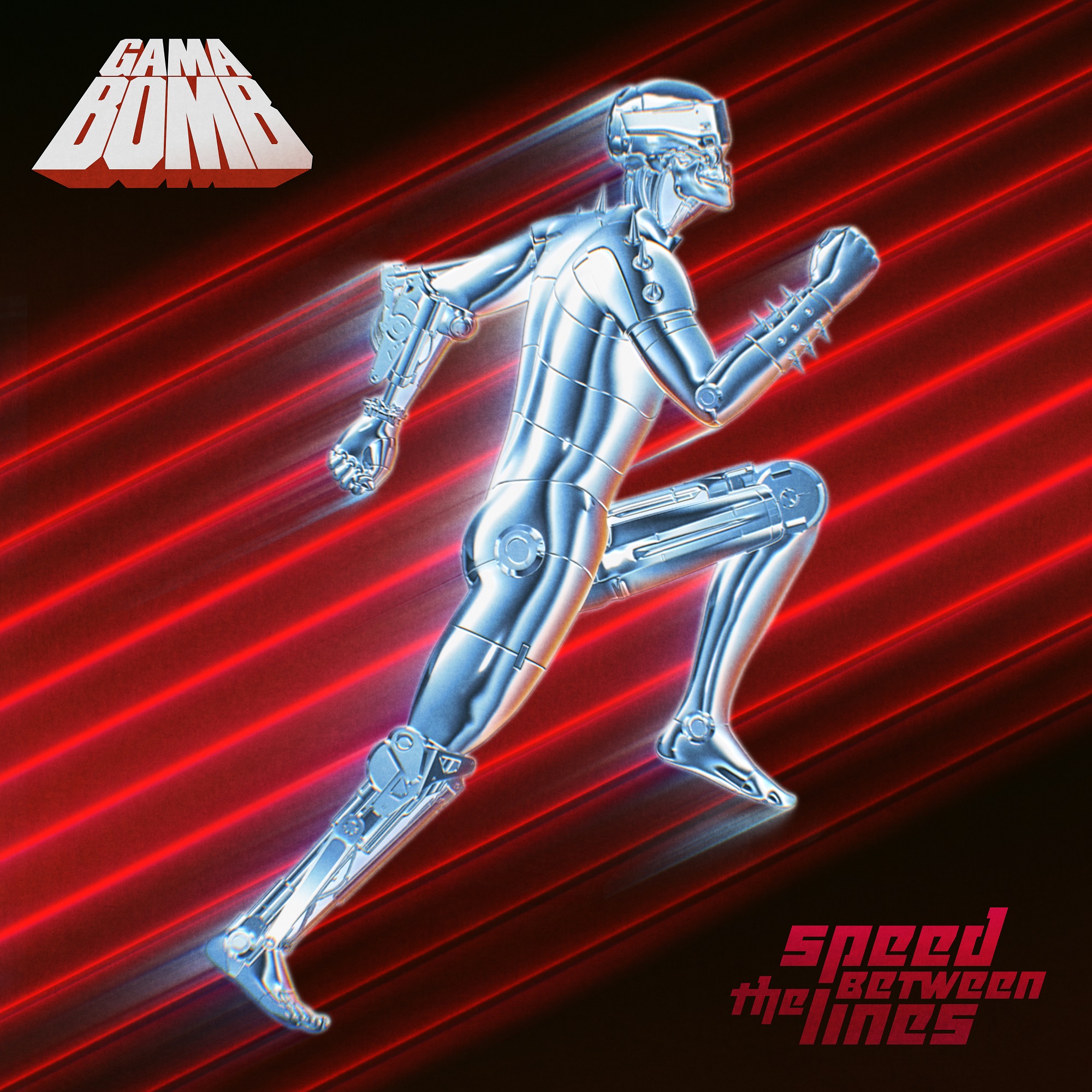 Gama Bomb – “Speed Between the Lines”

By David RodriguezOctober 6, 2018 No Comments

Gama Bomb continue to embody ripping, straightforward thrash metal that makes you check your serious attitude at the door with Speed Between the Lines.

Gama Bomb is one of those fun, party thrash bands you mom might have warned you about in the late 80s. Their playful nature is slathered onto their music, which means one thing: you cannot come into a Gama Bomb album expecting a serious endeavor. This is wacky, cartoonish metal for those looking to be entertained by B-movie-level fare and razor-sharp guitar riffing. If you’re keen, Speed Between the Lines has just what you need, but, admittedly, not a whole lot else.

Right out of the gate, we get some Judas Priest worship with the fetishistic “Give Me Leather”. Philly Byrne’s falsetto and the burning guitar work is a huge nod – nay, headbang – to the showmanship of the 80s, particularly the likes of Rob Halford (Priest), King Diamond, and Udo Dirkschneider (Accept, U.D.O.). As long as I’ve been listening to Gama Bomb, Byrne’s always had a powerful, clean voice that’s a great asset to the band. This is ideal since you’ll want to hear the lyrics as much as possible, lest you miss out on some of the best stuff the band has to offer.

Lyrical themes aren’t particularly sophisticated, but this isn’t the place for that. Gama Bomb is for 80s schlock-inspired fantasy. Even the art design for this album’s vinyl release is heavily inspired by old movie marketing and designs from that decade. “Kurt Russell” is a stomper of a track with lyrics referencing the rugged veteran actor. “Alt Reich” makes metal great again by taking a firm stance against Nazis. The teenage hesher angst satire is lethal in the conventionally-structured single “666teen”, which I intended on quoting, but why do that when you can just see the lyric video down below?

I bet you’re wondering how the instrumentation is. In a sense, if you’re a fan of thrash, you know what you’re getting, for better or worse. Gama Bomb play it very straight, delivering rapid-fire drum rhythms, wrist-breaking riffing, gang vocals, and other genre staples. There isn’t much in terms of experimentation or deviation – just pure, unadulterated thrash which marks this album with a hint of disappointment.

Many other thrash bands are trying different things while staying true to the sound, but these Irish thrashers are sticking to their guns. Even still, it’s hard not to get pumped up by the intros of “Give Me Leather” or “A Hanging”. The solo of “World Gone to Hell” rains destruction, and the refrain riff of “Bring Out the Monster” ushers in an abomination of a melody. The speed and ferocity never seem to relent which is fine, but some diversity would have been appreciated for a more engaging listening.

Gama Bomb‘s sixth album shows them playing very tightly with only a couple blindspots, and finding new ridiculous lyrical topics to distill through their beer-soaked creative process. If you don’t mind walking down the same thrashy roads one more time, Speed Between the Lines is great fun. Play “Motorgeist” during a car trip, or “Alt-Reich” while you achievement hunt in Wolfenstein II and all will be well!