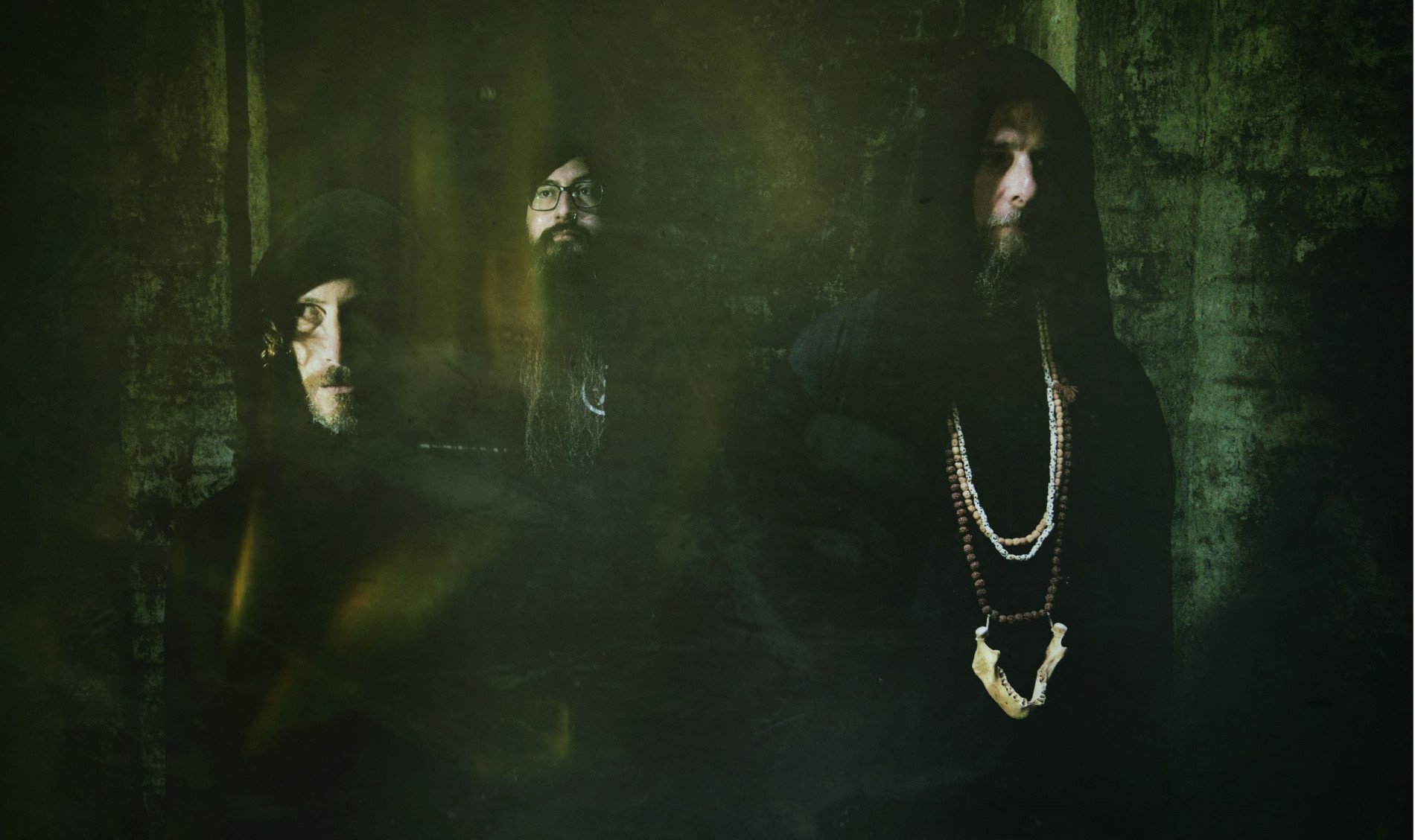 Five The Hierophant – “Through Aureate Void”

By Nick GoslingFebruary 22, 2021 No Comments

Through Aureate Void offers a transient glimpse into realms unknown. Radical, bestriding, and at times even maniacal, Five The Hierophant have once again torn the fabrics of musical rule asunder on their spellbinding second album.

For the uninitiated, Five The Hierophant are a London-based instrumental cabal that occupy an unearthly plateau, on which they routinely defy and dismantle the already elusive conventions of experimental metal. With their eclectic melange of blackened post-metal, jazz, drone, and psychedelia, they are one of the UK’s most intriguing and incomparable exports.

Hailing from within the gloomy cavities of the big smoke, the band’s oeuvre is appropriately dense and miasmatic, and their latest offering is a compelling expansion on their hypnotic debut, Over Phlegethon. Across five distinct vistas, the band traverses bleak and disturbing atmospheres with a metamorphosing grandeur, often heavy, and always exhilarating.

Immediately, “Leaf in the Current” initiates the album with a mesmeric charisma, utilising a rhythmic jazz-doom crux as a backdrop to the sensually phrased saxophonic voice. No sooner than the track has begun, the peculiar rhythms and barrier-tearing instrumentations establish the album as a characteristically eccentric collision of musical stripes. At one moment I am reminded of no-wave giants Swans, and at the next, of cult sludge bands like Tephra and Sunnata.

‘It’s quite abstract, and there’s lots of experimentation, both in regard to the sound and instruments used, and to the song structures. A lot of it comes from improvisation and leaving things to chance.’

FTH‘s music is recurrently built around repetitive phrasing, with minimal changes gradually shifting through the sonic landscape of each track in a manner quite labyrinthian. Picture each movement as a serpent guiding us intricately through elaborate tableaus, revealing new facets with each passing weave. Such is its enthralling quality that it’s easy to lose oneself within the reverie and mislay the passage of time.

“Berceuse” takes this concept to the next level, utilising an utterly bewitching bassline to descend ever deeper into a macrocosm of corporeal and spiritual abstraction in a manner that transcends repetition through its characteristically gradual development. The album frequently instills a trance-like quality, as though plaiting weary steps into a dense cosmic maze. You may even find yourself questioning your lucidity, such is its almost narcotic quality.

Despite this tendency to progress slowly, it’s remarkable just how varied this album can be. As the aforementioned artists alluded to, this is an album built on dynamism, and the subtle progression from slumber to delirium is one of their defining merits. The stark polarity of fuzz-driven doom and restrained jazz, especially across “Pale Flare over Marshes” into album closer “The Hierophant II”, shows a band in total control of their respective timbres, aided to no end by meticulous production.

Through Aureate Void once again shows this band as doyens within their peculiar, abstract domain. As executed in the fantastic artwork by Odd Norstrum, we are but naked vassals at the mercy of FTH‘s perpetually expanding realm, with each passing moment tumbling deeper and deeper into its celestial abyss. As a frequent rover into their growing discography, I can only recommend you investigate this rare and perplexing album with unabated urgency; you too will find yourself tangled in its web.